The Priory Method: A Restorative Care Model For Older Persons 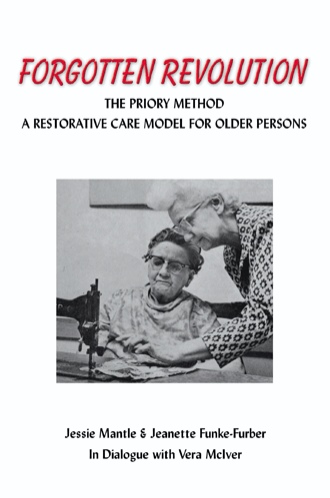 This book rediscovers this Priory Restorative Care model and places it in the public domain where others might be inspired to follow the originator's path. The Forgotten Revolution documents the care practices and the management infrastructure that restored dignity and wholeness to the older people who made the Priory Hospital their home. It is needed as much in the new millennium as it was 30 years ago.

Journey back to the late 1960's and enter the mind and spirit of a visionary woman, Vera McIver. A nurse in her early 50's, new to management and new to caring for the elderly, she dared to think outside the box of traditional care and revolutionize institutional life for frail and ill older persons forever. In 1967 she rebelled against the prevailing system called custodial care - a system that triggered a cascade of effects that led to a loss of pride and dignity and the death of the human spirit. She created an approach called Restorative Care, which she defined as a programme to restore dignity of life to older institutionalized persons within the limits of their capabilities. The Priory Method contained most elements now recognized in 2003 as essential to a progressive residential environment for older persons.

What has happened to this model of care in to-day's practices? Unfortunately the model still remains unknown to many working in long term care. In other instances, the model has appropriately changed and evolved over time as the ideas have permeated the culture of long-term care but few people know the origin or the extent of the ideas. By putting this information into the public domain we hope that readers will be informed and reminded about the salient features of the model. We also hope they will examine their own situations with older persons and use McIver's ideas to humanize them where needed.

As we go to press the health care system is once again in crisis and advances made in the past are at risk of being lost. The shift to a preoccupation with health care costs is challenging some of the innovative ideas found expressed in this book and which have been successful. Yet again there is a need for creative and informed leadership if the rights of residents for humane and quality care are to be preserved. This book illustrates how one person might seize opportunities for change provided one has the courage and vision to do so.

The authors of this monograph were privileged to inherit the legacy of working with the Priory Method long after its development. During the 1980's and 1990's they were both in positions of leadership at the Juan de Fuca Hospitals, hospitals which included the original St Mary's Priory.

Jessie Mantle is Professor Emeritus, University of Victoria, Victoria, BC, Canada. During her career she has been a staff nurse, an instructor in a diploma School of Nursing, a university nursing professor and a clinical nurse specialist in gerontological nursing. Between the years of 1981 and 1995 she held a joint appointment as Professor at the University of Victoria and Clinical Nurse Specialist at the Juan de Fuca Hospitals where she was introduced to the Priory Method. In this latter role she developed evidence-based clinical programs becoming a leader in delineating the salient features of nursing care for the elderly in Canada. She has been a role model and mentor to nurses in this specialty and was a founding member of the Canadian Gerontological Nursing Association becoming the first President of the Association, from 1985 to 1987. Through her teaching, invited speeches, articles and conference presentations she has influenced health care professionals to critically examine how they care for older adults.

Jeanette Funke-Furber, is a retired nurse living in Victoria, BC, Canada. Currently she is President of the Greater Victoria Eldercare Foundation. During her career she has been a staff nurse in hospital and home care and a teacher of nursing in hospital diploma, college and university programs. Between the years 1985-2000, she was the senior nurse administrator at the Juan de Fuca Hospitals in Victoria, BC and Adjunct professor, University of Victoria. During this time, she established a shared governance model and introduced Quality Improvement Programs. These programs enhanced the participation of all staff, residents, families and community in developing and implementing patient centered care programs. She taught Nursing Management and Current Issues to BScN nursing students, and supported the expansion of student clinical placements throughout the Juan de Fuca Hospitals. She was a strong advocate for career development of nursing and multidisciplinary staff in the specialty of Gerontology.