The History of Clyffe House

by David B. Scott 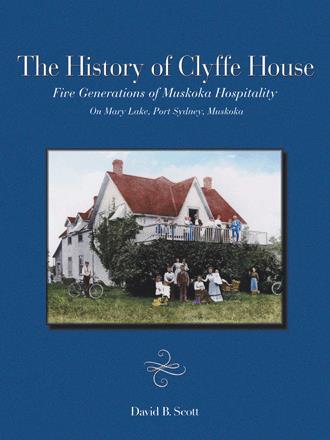 JAMES AND FANNY ARRIVE IN MUSKOKA: 1869. In April 1869, the newlyweds James and Fanny boarded the “S.S. Prussian” steamship, which left Liverpool on its maiden voyage and arrived six weeks later in Canada. James and Fanny first arrived in Montreal and then travelled by train via Toronto to Barrie. From that point onwards, the closer they got to their new homestake, the tougher the travelling became. From Barrie, they boarded a steamer, which took them to the north end of Lake Couchiching, at Washago. The next challenge was a bumpy stagecoach over the terrible road from Washago to Gravenhurst at the south end of Lake Muskoka. From Gravenhurst to Bracebridge was a relatively easy steamship ride; however, the next leg, heading north on the south-running Muskoka River with its six waterfalls between Bracebridge and Port Sydney, made traveling with any possessions impossible. Since Fanny had insisted on bringing as much as possible with them, even carrying with her a large, cast iron pot, which she called a “kettle” , the pair were forced to travel via horse-drawn stagecoach on the horrible roads from Bracebridge to Utterson – the most treacherous part of their journey. The final leg of their journey was a stagecoach from Utterson to Port Sydney. Fortunately, a man by the name of John McAlpine, the first owner of the Port Sydney sawmill, was there to greet them and help them cross the Muskoka River to their property. As they paddled across the mouth of the Muskoka River to their new homestake on Mary Lake, young James and Fanny saw in the center of their two hundred acre grant, a pretty, sixteen acre valley. However, the valley was covered with a heavy forest and huge white pines that would prove to make farming difficult. I find it almost impossible to imagine how difficult life must have been for the early settlers in Muskoka. Whenever I am walking through the woods and chance upon a giant white pine, I realize the effort it would have taken my great-grandfather to clear the land at Clyffe House. Today, these giants are cut with a chain saw; then, he used a hand saw and an axe. One of the first things James and Fanny did once they arrived in Muskoka was to build a log cabin. They were able to help John McAlpine by “advancing him $80 to buy the first saw for his mill, for which, Jenner was to receive the first lumber cut, for a floor for his log cabin.” The majority of the new settlers arriving in Port Sydney spent their first winter in one-room log cabins with no insulation and an open fire for heat. In 1870, one year after arriving in Muskoka, James’ crop consisted of ten bushels of rye wheat, 50 bushels of potatoes, and 150 bushels of turnips. He reported owning no livestock. The census of 1871 showed that within the first two years of living in Canada, James had “improved” at least ten acres. He would eventually acquire livestock and build a barn. Also in 1870, James and Fanny celebrated the birth of their first child, a boy by the name of Frederick James. James and Fanny’s second child was born in 1872 – Alfred Ernest. Five more children followed soon after: Robert, born in 1874; Ida, born in 1875; Roland, born in 1880; Alice, born in 1881; and Charles, born in 1884. While seven children in a span of fourteen years seems like a lot by today’s standards, in those days, it was an unremarkable number. Adjusting to their new life in Muskoka took some time. Some of the following stories were taken from the first chapter of Pioneer days in Muskoka, 1927, a collection of essay by the descendants of the original Mary Lake settlers, written by Ida Casselman (nee Jenner), James and Fanny’s fourth child . insert graphic 04,tiff. Ida Casselman small In their first year, James bought a dug-out canoe made from a large white pine log for ten dollars from a man by the name of Jerry Hanes in Utterson. One night, out in their canoe, James and Fanny were “completely lost on the lake in a heavy snowstorm, the evening of October 4, 1969. They had spent the day with Mr. and Mrs. Thoms, leaving for home in a little log canoe, about 7 pm. …the snow came down so fast, no hill or island could be discerned. Finally, having paddled for hours, they arrived back where they had started from, and so remained the rest of the night.” The Jenners and the other settlers on Mary Lake were surrounded by wildlife: wild geese, deer, pigeons, flying squirrels, lynx, fox and bear. In her book, Casselman tells of one settler, who, upon hearing a lynx cry out in the night for the first time, thought it was a person yelling out for help. He “bravely took his shotgun and started through the dense woods” seeking to help the distressed person. “He was surprised when told the next day that he had been following a wild cat.” When yet another settler first heard the deep sound of a bullfrog, he sat up all night with his rifle ready to defend his family. Casselman also wrote that, “in the early days, a number of Indians camped around the lakes. …a feeling of fright was experienced when one or more suddenly appeared at a settler’s door. The children were brought to sudden obedience when told the Indians would get them if their conduct was otherwise than good.”

The History of Clyffe House – Five Generations of Muskoka Hospitality is a unique story about the oldest resort in Muskoka run continuously by the same family. The story, as told by the current owner, David Scott, is a powerful testimony to the value of tradition, family, and friendship. In 1869, David’s great-grandparents, James and Fanny Jenner, newly married in Gloucester, England, crossed the Atlantic for Canada on the maiden voyage of the steamship Prussian. They carved a homestead out of the virgin Muskoka forest and raised seven children. Tourism to the area became a viable option when the railway arrived in 1885, and the couple established Clyffe House, one of the first hotels in Muskoka. The captivating beauty of Muskoka and the warm resort atmosphere resonate through the memories shared by the author, and those contributed by former and current guests and staff. After reading the story about this 131 year-old resort, it’s no wonder that many guests returned year after year, decade after decade, and even generation after generation.

Author, David Scott, is a retired high school teacher and the fourth generation of his family to own and operate Clyffe House. David took over the management of the hotel from his mother and aunt in 1975, eventually moving home in 1989 to teach at Huntsville High School for the remaining years of his teaching career. David enjoys the beauty of Muskoka with his wife Arlene, his four children and six grand-children. David has also co-authored These Memories I Leave to You, a history of the Mary Lake settlers, with his friend and neighbour, Ryan Kidd.