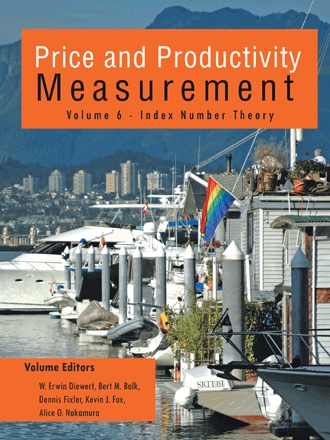 As explained in the introductory overview chapter, the papers in this volume fall into two groups: (1) alternative productivity measures and decompositions of productivity growth, and (2) properties of alternative index number formulas. This is a volume primarily for specialists and those trying to become specialists, in contrast to most of the other volumes in this series that should be readable for economists in all areas. Chapters 2-7 make up Part I. In chapter 2, Paul Schreyer of the Organization for Economic Co-operation and Development (OECD) explains that different ways of specifying computable measures of multifactor productivity (MFP) embed different assumptions about the technology and competition on output markets. He develops a very general model which provides a decomposition of traditional Total Factor Productivity or Multifactor Productivity growth into explanatory factors. He lists five sets of assumptions and develops alternative empirical productivity growth estimates for Canada, France, Japan, and the US. Different investigators have chosen different methods for measuring the contributions to industry productivity growth of entering and exiting firms. In chapter 3, W. Erwin Diewert of the University of British Columbia and Kevin J. Fox of the University of New South Wales propose a new approach for decomposing industry productivity growth into terms reflecting the productivity growth of individual production units that operate in both the base and comparison time periods (the “continuing firms”) as well as the impacts on industry productivity growth of firm entry and exit. They explore the properties of the new approach. In chapter 4, Diewert first focuses on a decomposition derived by Tang and Wang of economy wide labour productivity into sectoral contributions. He also explores another decomposition approach due to Gini. Policy makers are also interested in estimates of the contributions to aggregate productivity growth of particular industries. Marshall Reinsdorf and Robert Yuskavage of the U.S. Bureau of Economic Analysis (BEA) explain in chapter 5 that the lack of an additive formula for industry contributions to real output growth means that formulas for industry contributions to aggregate productivity growth also generally add up to incorrect totals. The authors show that proposed approximate formulas can work well. In chapter 6, Ulrich Kohli, who was chief economist of the Swiss National Bank when this chapter was written and is now with the University of Geneva, points out that most headline productivity measures refer to the average product of labor. Kohli notes, however, that a more relevant measure might be the marginal product. In chapter 7, Bert M. Balk of the Rotterdam School of Management, Erasmus University, and also Statistics Netherlands systematically considers the measurement of productivity change using a KLEMS framework. He illustrates how the analysis can be conducted without imposing neoclassical assumptions. Chapters 8-16 make up Part II. Many official statistical agencies state that they use a Laspeyres index as a conceptual target for their CPI. However, in chapter 8, Balk and Diewert note that the headline inflation figure for many nations, including the Netherlands, is obtained as the percentage change between a current month and the corresponding month of the prior year, with a reference year being used for the quantity weights. This is not a Laspeyres index; they call this a “Lowe index.” Bert M. Balk, W. Erwin Diewert and Alice O. Nakamura 2 In chapter 9, T. Peter Hill, the editor of the international Consumer Price Index Manual: Theory and Practice (ILO et al. 2004), explains that this Manual and a 2003 working paper by Balk and Diewert (now available as chapter 8 in this volume) are where the term “Lowe Index” was introduced. He explains of this class of indexes. A recurrent theme when measuring aggregate price and quantity change between more than two periods is the choice of computation of direct versus chained index numbers. Bert rigorously explores this issue in chapter 10. In chapter 11, Diewert provides a selective review of the stochastic approach to index numbers, from its inception in the 1800s through a recent resurrection of interest. This paper has been much cited, and is included to aide readers in checking this reference. Diewert explains that the two main competing approaches to index number theory are the test approach and the economic approach. He explains that the economic approach to index number theory concentrates on finding functional forms for price indexes that are exact for flexible unit cost functions, and on finding functional forms for quantity indexes that are exact for flexible linearly homogeneous utility functions. Index number formulas that are exact for flexible functional forms are called superlative. In chapter 12, Diewert and Robert J. Hill of the University of Graz, Austria and also the University of New South Wales reconsider the fundamental concepts of true and exact indexes, as these concepts are defined in the index number literature. The authors explain that these concepts form the bedrock of the economic approach to index number theory. In chapter 13, Andrew Baldwin of Statistics Canada endorses the 1993 System of National Accounts (SNA93) recommendation for chain linking, but not its support for chain Fisher aggregates, nor, as a second-best solution, chain Laspeyres aggregates. Ulrich Kohli, chief economist of the Swiss National Bank when this chapter was written and now with the University of Geneva, gives strong arguments chapter 14 against the use of direct indexes. Kohli argues that the fact that the direct Paasche GDP deflator is not monotonically increasing in prices makes it a poor indicator of inflation. Indeed, he shows that such an index potentially could point at a price increase when prices are actually falling, and vice versa. Yet it is widely used in the literature. Ludwig von Auer of the University of Graz, Austria in chapter 15 shows that a run of direct Laspeyres indexes can violate a monotonicity property if there are more than two periods in the run. In chapter 16, Diewert considers problems involved in collecting and aggregating price and quantity information at the lowest level. This chapter proved to be an important source on elementary indexes for the 2004 Consumer Price Index Manual edited by T.P. Hill, and is provided here for the convenience of those interested in reading this paper. 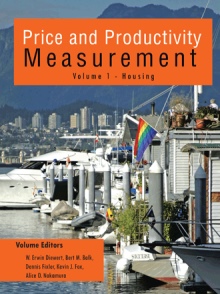 About the Editors: W. Erwin Diewert is a professor of economics at the University of British Columbia in Canada, the long time Chair of the Statistics Canada Price Measurement Advisory Committee, and a major contributor to numerous international official statistics manuals (http://faculty.arts.ubc.ca/ediewert/hmpgdie.htm). He has won many Canadian and international awards including the 2005 Julius Shiskin Memorial Award for Economics and Statistics. He is also a Distinguished Fellow of both the American Economics Association and the Canadian Economics Association. Bert M. Balk is a professor of the Rotterdam School of Management, Erasmus University Rotterdam, and is also with Statistics Netherlands. Dennis J. Fixler is the Chief Statistician of the U.S. Bureau of Economic Analysis. Kevin J. Fox is a professor of economics and is Head of the School of Economics in the Australian School of Business at the University of New South Wales and also Director of the Centre for Applied Economic Research (CAER). Alice O. Nakamura is a professor of the University of Alberta School of Business.