How We'll All Be Equally Rich, Famous, Brilliant, Etc., Forever 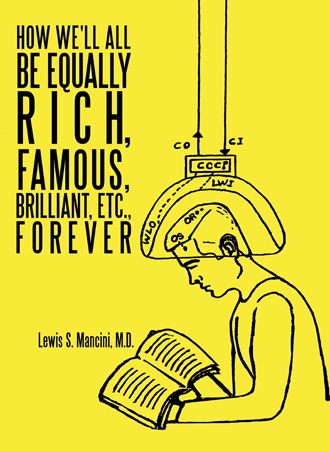 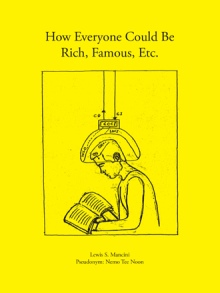 Lewis Mancini, M.D., posits that all past, present, and future earthlings will become extremely wealthy, famous, intellectually brilliant, and immortal via reproducible out-of-body experiences, brain stimulation, the Internet, GPS, and other scientific and technological advances. These developments will all take place within the remainder of the current century. Moreover, the mind or soul of all earthlings will be revealed to be ageless and deathless, while the notion of death will be revealed to be nothing more than a cruelly punitive illusion foisted upon us by an envious universe filled with angry Earth-watchers who resent the actual center-stage status of our planet.

All human mind particles, regardless of earthly birth date, stick together for eternity due to the forces that exist between and among us. These forces include the strong nuclear force, the weak nuclear force, electro-magnetic attraction, gravity, and the force of sentimental affection or love by which all conscious, subconscious, and even unconscious particles are (at least potentially) strongly motivated.

Mancini’s work is the exploration of the concept of the human mind particle, a possible interface between science and religion, and the ultimate future for all residents of earth.

Lewis S. Mancini, M.D., is a psychiatrist with additional background in biophysics, bioengineering, and electroencephalography (EEG) technology. He was a psychiatrist-in-training in 1985 when a combination of obsessive-compulsive disorder, manic depression, and learning disabilities derailed his plans. He hopes to return to his original plans when and if effective treatments become available to him.