A Mayan Myth of Self-Discovery 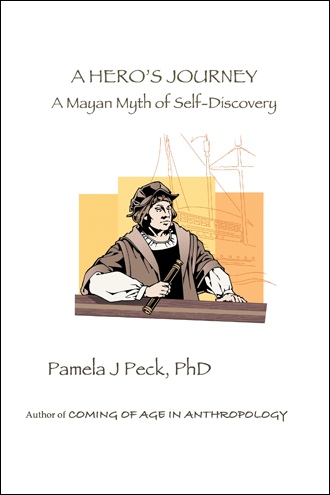 This entertaining and easy-to-read “wisdom book” consists of two stories in one: a modern Mythology about a boy’s search for the lost gold of his tribe and a personal Journal about an adventurous ocean crossing following the boy on his mythological quest. The author wrote this original myth as part of a Lecture Series for a Trans-Atlantic crossing from Fort Lauderdale to Barcelona on Royal Caribbean’s flagship “Legend of the Seas” in the final year of the last millennium. Only the story portions of the lectures are included here, their purpose being not only to share history and culture of the geographical areas but to point to a much wider purpose: illumination of anthropologist Joseph Campbell’s teachings about the mythological Hero’s Journey. For this publication, the writer shares personal insights and experience of the voyage by interweaving Journal entries alongside Mythology, sharing information on the ports of call both researched in advance and discovered along the way. The seven entries of the Hero story, an integral part of the overall Lecture Series on the mythological Hero’s Journey, were delivered aboard ship on days at sea.

Cultural Anthropologist Dr. Pamela J Peck is an author, lecturer, composer and playwright whose creative works appeal to people of all ages as she takes us on magical and adventurous journeys to the far corners of the outer world and into the inner recesses of the human mind.