The Great Depression Put To Music, Song and Dance 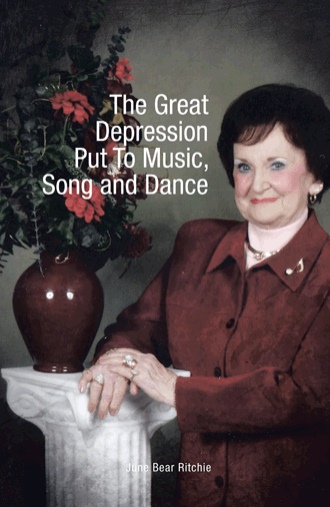 The great depression put to music song and dance

on December 7-1929 on a farm, near a little town called Kent, Indiana.

the great depression hit every one. nearly every one was in the same m

situation ., and Herbert Hoover had been sworn in as there President.

there were no jobs and no money, if you were lucky enought to find

a place to work, a little money would go a long way.people were

willing  to work any where ,and  do any kind of work in order to put

food on there table. our father was one of those people, i watched

him walk  4 miles to work in all kinds of weather, to a rock quary and

sledge rock all day by hand  with a sledge hammer, and then walk

4 miles home. all of his clothes  covered  with  white lime stone, i

could hardley see his face. ,for the lime stone. but,times were getting

bad, the  depression  was  taking its toll on every thing, the banks

all closed there doors, people  could not  get there money out., and

to top things off., the stock  market fell and everyone lost there

money in the stock market. this was all happening in  1929 .

The Great Depression is a part of real history that really did happen. In 1929 was when it was really bad. People were hungry there were no jobs and no money. I was born the 1929 and the depression went all through the twenties and thirties and into the early forties; but times were getting bad. The depression was taking its toll on everything and everyone. A little money went a long way, but there was no money and to top everything off the stock market fell and everyone lost their money in the stock market, the banks closed their doors, no one could bet their money out. My father had a friend that lost all of his money in the bank in 1929. If you didn't live in this time of history you can't imagine what life was like. I watched my father walk 4miles to work in a rock quarry carrying his lunch box then walk home after sledging rock all day. My mother raised a vegetable garden and canned a lot of food so we would have food for the winter. This is just a preview. Now, how did I come up with the name of my book? The Great Depression Put to Music, Song and Dance. My father played violin and mother played piano - Music My sister and I sang - Song I grew up to teach dance - Dance

How did it all happen? Let's start with the Great Depression of 1929. I was born December 7, 1929 in the country at home near Kent,Indiana to Irven and Jessie Bear. I was also born into a family of musicians ad at the age of 12 I started playing the guitar by memory it means I didn't take lessons to play, it was all natural. Folks would have house dances, roll back the rug and dance until dawn. We played at old fiddler's contests and won first place seven times. I taught clogging at many different locations and was dance instructor for The Indiana Red Star Cloggers for 36 years. They performed in 1989 at Disney World in Florida; Performed at Innsbruck Austria House of Congress in 1997. I danced at County Fairs, Festivals, State Fairs and taught many National Clogging Conventions. I was elected into Square Dance Hall of Fame in 1984 at Renfro Valley and received a trophy and was commissioned a Kentucky Colonel at Renfro Valley. I have chest full of trophies and plaques that I have received down through the years. I am a Country Western Dance Instructor and owned my own dance barn for many years. The name of my western group is The Indiana Boots and Jeans Country western Dancers. I have taught many different couple dances, line dances and show routines. I took my country western dance to Knoxville, Tennessee where they performed on a show called Club Dance and it was televised on TNN. I tool a group down every year for 7 years. I also taught the old time hoedown square dancing for many years and was a member of three western square dance club for 15 years. I wrote all my show routines and line dances for my cloggers. For all the music connected to my life, I give credit to my sister and my parents whom are all gone now and my husband Charlie for being my dance partner and our two woderful sons Dorrell and Barry for putting up with mom dancing all through their lives.