Does Everyone Get a Turn to Be God? 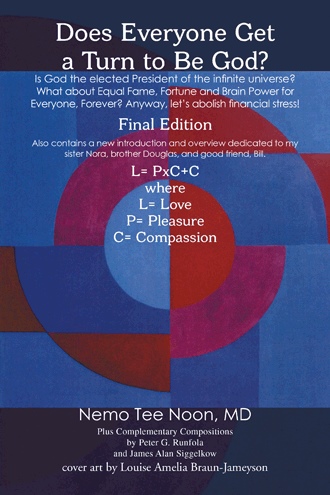 Throughout his life, Nemo Tee Noon, MD has faced trouble and confusion with regard to sexuality and gender identity. Even more stressful have been his battles with mental illness and learning disabilities. Despite these challenges, he received his M.D. degree from St. George’s University School of Medicine, Grenada, West Indies in 1983, when he was 31 years old. He worked for two years as a psychiatric intern and resident, but suffered a nervous breakdown in 1985 and has been on disability since then. However, he did manage to earn a two-year brain wave (electroencephalography, EEG) technician’s degree between 1986 and 1989. Moreover, he arrived at the conclusion that the mind and brain must be two different things, with the mind being a single particle that usually has its consciousizer switch turned on. The recent discovery (by physicists) of the “God Particle”, a particle that imparts mass to all other particles, tends to support Noon’s mind particle theory. According to his hypothesis, if God might be a single particle and you and I are made in God’s image, then it stands to reason that we, too (each of us Earthlings) might be a single particle, albeit temporarily trapped inside a burdensome, vulnerable body or brain-body pair. He delineates how all past, present and future Earthlings will be rich, famous, brilliant, good-looking, etc. forever, starting at some time within the next 50 to 100 years. Also, how everyone could get a turn, sooner or later, to be God is touched on, in a preliminary way.

Nemo Tee Noon, MD, is a psychiatrist with additional background in biophysics, bioengineering and electroencephalography (EEG) technology. He has been afflicted with various learning disabilities since childhood and disabled with severe obsessive-compulsive disorder (OCD) since 1985. His two major learning disabilities are gadgetaphobia and general information phobia. He has also been diagnosed with bipolar manic-depression since 2007. He is a graduate of St. George’s University School of Medicine (1983). And previously, in late 1974, worked briefly (as a research assistant) on “Artificial Vision for the Blind,” under the auspices of Dr. William H. Dobelle at the University of Utah. Dr. Dobelle is cited in the 2005 Guinness Book of World Records under the headings of Medical Phenomena and the “earliest successful artificial eye” on page 20. The author also won an award for “academic excellence” in EEG technology from Graphic Controls Corporation and has had six articles published in Speculations in Science and Technology and Medical Hypotheses. He also had books titled How Everyone Could Be Rich, Famous, Etc. and How We’ll All Be Equally Rich, Famous, Brilliant, Etc., Forever published by Trafford in 2006 and 2010, respectively. One of his goals is to play whatever role he can in the conceivable implementation of brain-stimulation-mediated learning facilitation (LF) and work skills facilitation (WF), enhancement and diversification.