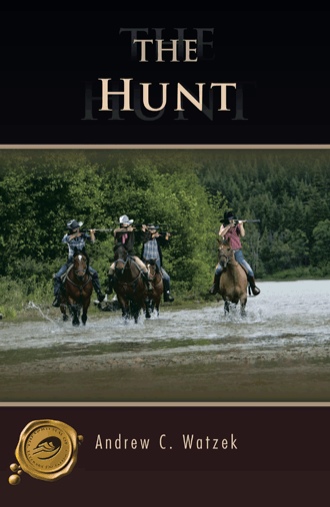 Again they rode well into night before making camp. They built a small fire and laid out their bedrolls. After they had eaten supper, Angela took off her gun belt and reached into her saddlebags. She pulled out a mail order catalogue and tore off a few pages. She grabbed her rifle and started off into the darkness. “Be sure to get well downwind,” Julie said. “You’re a real funny girl,” Angela replied. Angela walked off into the darkness for eighty or ninety yards before picking herself a nice spot. She was just getting comfortable when she heard a noise coming from the woods over her left shoulder. She leaned over, grabbed her rifle, and eared the hammer back. “For Christ’s sake,” she thought, not now. She turned her head toward the sound and tried to determine what she had heard and how many. She hoped it was just a deer or an elk wandering by, but then she heard a horse stepping through the dirt and saw a lone rider heading toward the camp. He was moving slow and did not appear to be someone intending to do any harm. She thought that, if this was one of the men they were after, he would stay back and watch for a bit and then ride off to warn his friends. This man seemed as though he wanted to come into the camp. Angela knew she had not been detected, so she would keep her rifle aimed at this man from the darkness. The others were preparing their beds and cleaning up after supper when they heard a voice from the shadows, “HELLO to the camp! Can I come in?’ Julie spun around toward the sound and drew her pistol in a single motion. The other two girls grabbed their rifles and pointed them toward the sound. They all stood in silence for a moment not knowing what to expect next. “Come on in, but real slow,” Sara answered. The man rode in from the dark slowly and stopped his horse when he entered the camp. He looked around the camp and made note of everything he saw. The girls kept their guns trained on the man as he looked them over. “I smelled your coffee. Can I get down off my horse?” “Climb down, mister. There’s a cup by the pot,” Becky said. “I’d be obliged if you would lower those guns. Being held at gunpoint makes me feel like I ain’t really welcome.” “Well, we ain’t real comfortable with a stranger in camp either,” Julie said. “I mean you no harm, and I know there’s another gun out there in the dark, most likely pointed right at my head.” “What makes you think that?” “I ain’t stupid, girl. You’re four saddle horses and three pack horses. You’re four bedrolls and three women. Number four is out there with a rifle somewhere.” “Just who the hell are you, mister?” Sara asked. “Name’s Fletcher, Hank Fletcher. I’m an Arizona Ranger. We got a wire that one of our retired Rangers was killed in Young. Adam McCulough was his name. Damn good man. I’m after the men that killed him.” “All by yourself?” Becky asked. “I’m meeting three more Rangers in New Mexico. Are you gonna call in your friend?” “Come on in, Little Bit,” Sara yelled. Angela walked into camp from the shadows and laid her rifle next to her bedroll. The Ranger watched her walk in and said, “Little Bit? Jesus Christ, there ain’t nothin’ little about you. You must be six foot.” “Close enough, I reckon.” “Well, now that you know who I am, why don’t you tell me who you all are and what the hell you’re doin’ way out here.” “We’re just on a huntin’ trip, mister.” “Huntin’ trip, my ass. I know who you are. You’re Mac’s daughters. I heard that you were trailin’ these men. You need to go home and let me handle this.” “We just came up here to hunt elk,” Sara said. “Bullshit! I can’t stop you from doin’ what you’re doin’, but I’m gonna tell you, DON’T get in my way. These men are murderers, and I don’t need a bunch of little girls gettin’ killed before I catch up to them. Now you pack up your things and ride home at first light.” “I reckon you’ve overstayed your welcome, Mister Fletcher. We’d be obliged if you’d ride out now,” Sara said.

When Adam “Mac” McCulough loses his wife, Abby, in 1876, he is left to bring up his four young daughters, Sara, Becky, Julie, and Angela. Mac, a rancher and the sheriff of nearby Elkhorn, calls on his longtime friend Ezra Hawks, a half–White Mountain Apache, to help him on his ranch and to raise his girls. Together, the men teach the daughters to shoot, hunt, fish, track, and survive in the wild. Life rolls along for this unusual family, but an incident from Mac’s past comes back to haunt him. Before settling down with Abby, he worked as an Arizona Ranger and played a key role in the capture and conviction of a group of men who beat and raped a family in Prescott. The men, now released from jail, track down Mac and exact their revenge. Sara, Becky, Julie, and Angela are determined not to let the men get away with the murder of their father. They strike out on their own to hunt down the killers, but their quest for vengeance may come with a high price.

Andrew C. Watzek was born and raised in the Southwest and has been fascinated with its rich history and heroic tales. He has hunted and fished its mountains and rivers and taught his own daughters to do the same. This is his debut novel.