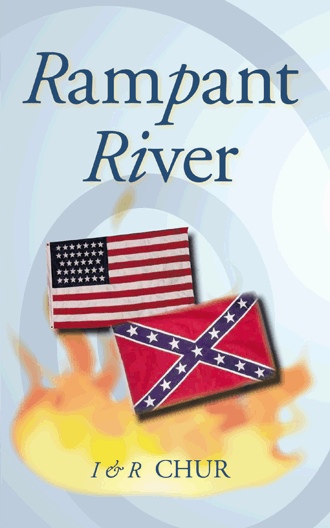 Pioneering the Minnesota Wilderness, smallpox killed his wife and child. Haunted by the tragedy, Sam Morgan lives a violent and lonely life. After ten weary, aimless years of drifting he sought peace in Kansas, to live his final years. He found Andrea, young and passionate. He found a new beginning, a challenge to tame the wild prairie. Sam fights rustlers and survives blizzard and drought. A new friend, Ben Duran, partners with Sam and sells Rampant River, horses and cattle. The ranch thrives from Sam's labor and Ben's shrewd business deals. Andrea gives birth to a son. Mathew. A Negro slave and his woman seek refuge; Sam takes them in. The old rogue is enamored by Crystal Rouge, a saloon hussy. And, he seduces Sarah Johnson, a debutant form the East. It was Sam Morgan's nature to take what he wanted. The fact that Andrew Tilman, an ambitious suitor, loved Sarah made no difference to Sam. The slave issue is hotly debated by Kansans. When words failed, guns blazed. The land became a bleeding, restless battleground of singular skirmishes between Abolitionist and Pro Slaver. Disasters like Lawrence and Pottawatomie Creeks added fuel to the flames of war. Small fired kindled and rekindles, flared brighter and brighter. Armies march to battle. Sam Morgan fought a private war, guarding Rampant River ranch. Astride a black stallion, a Henry rifle crooked in his arm, he was a grim man ready to kill. The white crosses on the hill near the ranch house testified to Sam Morgan's contribution to the war and his loss. Sam Morgan is shot by Lily, a saloon girl, when he discovers her in bed with his stepson, Daniel. Daniel leaves Rampant River and joins renegades lead by the religious zealot Zachary Eaton. Sam's stepdaughter, Heather, falls in love with Lieutenant Courtney. The lieutenant dies in Captain Quintrill's raid on Lawrence. Heather runs off to New York and begins the life of courtesan. Trouble follows Sam after the war ends. Sam Morgan is beset by treachery, betrayal, and murder. Andrew Tilman, made wealthy by his railroad business during the war, seeks to destroy Sam financially. When his plan fails, he pays for Sam's murder. In the alley behind a Fort Pike saloon, the knife of a savage half-breed stabs Sam Morgan. Only revenge will allow Sam Morgan to rest in Peace.

To write a best seller is every writer's dream. During my teen years, I remember hearing the tic-tack-tic of the old Remington typewriter keys from my dad's study. Pecking vigorously with two fingers, my dad wrote 25 adult novels with back stabbing protagonists and bedroom passion. My dad died before completing a Civil War novel - Rampant River. I teach American Literature at Bell High School in Southern California. During summer breaks, I spent time revising my dad's western. I carefully researched the time-line (1857-1869) and added historical detail. I matched words with my dad, intensifying the reality of scenes and dialogue. Vacationing with my wife, we visited Lawrence, Kansas, where troops lead by Captain William C. Quantrill murdered 140 non-combatants on August 21, 1863. We crossed the vast prairie and explored western ghost towns. In my imagination I rode the trail with the main character in Rampant River, the tough rancher, Sam Morgan. 600,000 American soldiers perished in the Civil War. Rampant River is about the American spirit - honor and courage. God Bless America.