For Love of Drama 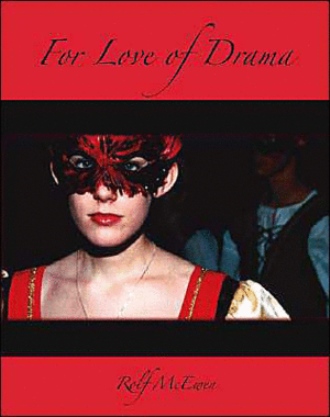 This book is about acting. It's about money. It's about people who love the arts. It's about performing arts and how to make them happen in high school--how to make them affordable by selecting great scripts to attract paying audiences. The sale of tickets provides the revenue to pay all costs of play production, with a profit margin to boot.

The book exudes the joy that accompanies working with artistic young people who are intent on excellence. It communicates the director's personal philosophy of allowing actors to begin a play by creating their own character development which can be shaped by the director over time. It promotes the concept that the students, not the directors, do the work. The students study the play, rehearse the play, and perform the play with guidance from the director, but without excessive direction. The director, for example, allows students to do the stage management, the lighting design and operation, and the sound effects. The director does not go back stage at all during rehearsals or performances, leaving students to solve their own problems and to make the production happen without adult assistance. The result is serious student responsibility and determination. The result is team work and cooperation.

Ideas for publicity are provided in the text, as well as suggestions for play selections, planning arrangements, budgets for various plays, and ideas for acting and directing. The director's philosophy is revealed, including persuasive arguments for the great value derived from participation in performance activities.

The book is a manual for creating and maintaining a drama program which brings out the best in the actors, stage hands, and technical workers. It makes an argument that there is no need to curtail or eliminate drama, dance, music, and other performing arts when finances grow tight, because these programs can pay for themselves if quality shows are performed for a public that is willing to pay for good perfomances.

For Love of Drama makes a passionate plea for the establishment of artistic programs in the schools which allow students to inspire their minds, develop their skills, and enjoy working with other talented young people in creating excellent performances.

Go ahead, treat yourself to a little love for the arts by reading this lively book. It is accompanied by 94 dramatic stage photos taken during rehearsals, revealing quality acting, costuming, and set design. It's a wonderful manual filled with practical ideas on how to keep a performing arts program thriving for the sake of gifted young people.

Rolf McEwen has been a high school drama director for 18 years. He has initiated new programs in three schools, establishing performing arts programs that allow students to develop and display their artistic talents in drama, instrumental music, song, and dance. He also teaches literature and photography. His love of literature results in his frequent use of scripts adapted from selections of literary classics, allowing students to memorize and perform plays demonstrating ideals and language which inspires and instructs.

His love of photography results in the creation of a portfolio of 300 or more photos of actors on stage taken during the final dress rehearsal of each play when costumes, make-up, set-design, and skill levels are most presentable. He enjoys the challenge of creating artistic images of actors on stage expressing emotions evoked from passionate interpretations of character, dressed in exotic costumes, surrounded by intriguing light.

McEwen believes that theater offers audiences an opportunity to see and hear important thoughts and ideas which can draw attention to essential themes of life. Beauty and truth can emerge on stage with an intelligent script in the capable hands of trained and talented performers. For this reason he has over the years selected plays adapted from literature by great authors including Charles Dickens, Victor Hugo, Charlotte Bronte, Moliere, and Shakespeare. He has directed The Diary of Anne Frank, Great Expectations, The Miracle Worker, The Hunchback of Notre Dame, Jane Eyre, and other plays adapted from literary classics.

For musical drama he has directed The Sound of Music and Fiddler on the Roof. In the musicals he has encouraged extensive dancing. In his performance of The Middle Class Gentleman, by Moliere, he incorporated several singers and five ballet performances employing six dancers.

He believes the stage when adorned with live action in a small theater provides an intimate atmosphere in which gifted performers can speak to the hearts, minds, and souls of members of an audience. It is an opportunity which cries out for exploitation for the sake not just of the young performers, but for audience members whose delight in viewing a fine stage performance can help restore our faith in humanity and society.

McEwen earned a Bachelor of Science degree from the University of Puget Sound in 1969, and a Master of Education degree from the University of Southern Mississippi in 1991. He studied art, music, and history for a year in Rome and Vienna. As a life-long learner, he has attended summer sessions at eight colleges. He has written The Good Trip Maui, Survival Tactics for Office Workers, Poem Soup, The Joseph Story, and Esther the Queen. He has been published in various magazines and poetry journals. He has worked as a freelance writer and photographer for newspapers and magazines. He has been selected for Who's Who Among College Students, and Who's Who Among High School Teachers. He served as student body vice president of his university. He has taught school for 25 years, and is still going at it. He also maintains a photography business and photo gallery, Rolf McEwen Photo Art, in Albany, Oregon.

Why produce the musicals if they cost so much?

Audiences love them, for one thing. But the most important consideration is what musicals do for the students. They allow us to do a stage presentation that features not only actors, but also singers, dancers, and of course the musicians in the orchestra beneath the stage. The art department and the woodworking students can also get involved in set building, painting, and decoration.

So a musical drama brings together several artistic endeavors, and this magical encounter provides students with a wonderful experience of cooperation and teamwork. They gain appreciation for the artistic gifts of other students. They learn to work together, the musicians waiting on the actors, and viceversa, the dancers doing their thing, and the stage crew, the lighting and sound technicians, all working together to create an evening of music and song and storytelling to touch the hearts of the people. Students learn life skills. They learn courage, cooperation, timing, discipline, projection, movement, teamwork, and mutual respect. It's a wonderful experience for the students, and I believe the relationships they develop and the skills they acquire can stay with them forever. And then there are the good memories, of course.

I emphasize that the most important part of the drama experience is the love we show for our fellow performers, and the cooperation and respect that we demonstrate daily in the rehearsal process. 90% of our time is spent in rehearsal. Rehearsal is a lot like life, working through daily disciplines without glamorous lights and costumes and jewelry and the applause, but only my voice shouting at them, correcting them, encouraging them, in loud, sweet, gentle, melodic tones.

The kids need to be pushed. Nothing gets done without leadership and discipline. Students often come to rehearsal tired. They want to sit down on the couch and sleep. They want to talk to their friends. Directors have to have a plan, they have to know what they want, and how to achieve it, or they will appear to be indecisive and unsure of themselves. This invites others to jump in and take charge, and then suddenly there is more than one director, and that leads to problems, to confusion, to rivalry.

Directors often are given plenty of advice by parents and students and administrators. But there can be only one director if there is going to be peace and order. Someone must make the decisions, and not everyone is going to like it.

Do you enjoy your work?

I love the kids. I work with wonderful people, generous people, with parents who want to help the kids develop their skills, demonstrate their talents, and enjoy life. With all the horrible things that happen every day in the world, isn't it wonderful to do something beautiful at school with good people working together? So we sing and dance and play the flute and act out stories that inspire people to make the world a better place.

Do your students ever fight and argue?

With certain groups we have had conflict, disagreement, and anger, but that provides an opportunity to get the adversaries together to work it out, to talk about it, to communicate. Usually, reconciliation works out fine. Each group has a chemistry of its own. The kids learn life skills in overcoming conflict. So the drama experience is a lot like life, a lot like the work place, because students are working together to create a performance. There will be differences of opinion, mistakes, debates, problems. We must welcome them as an opportunity to learn to overcome obstacles.

What are some of the other plays you have performed over the years?

I have tried to find stories that are inspiring, or important, or significant in some other way. I want the students to memorize good literature, stories that are classics. I want them to think, and I want the performances to inspire audiences, or to make them laugh so the play can provide some healthy relaxation. I don't like to perform a bunch of foolishness or degradation.