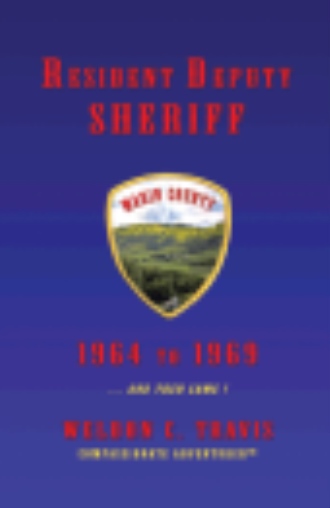 As a long-time Deputy Sheriff in Marin County, Weldon lived through some very interesting times relevant to law enforcement, participating in fighting the most vicious crimes emananting from the hottest issues of the day. His many memorable experiences, in and out of uniform, were always in the interests of keeping the peace. The book's subtitle, ". . . in Wild and Wooly West Marin; a collection of vivid vignettes," says a lot about its contents. The author's tales brim with a variety of countercultural events, and the many ways that humans succumb to evil and occasionally rise in redemption. Many revelations are devilishly humorous but all reflect the image of a conscientious man who has, fortunately for Marin County and California society, invested the major part of his life in keeping the sane balance between extremes of behavior found in the Golden State.

I was an Officer of the Peace, usually referred to as a "cop" (Constable on Patrol) for 33 years with the Marin County, California Sheriff's Department during very turbulent times ~ the onset of the "hippie" movement with its drugs, indiscriminate sexuality and antiwar sentiments. I lived among many of the rock stars and their band members such as The Grateful Dead, Jefferson Airplane, Sly and the Family Stone, Grace Slick, Naomi Judd, Joan Baez and her sister Mimi Farina. It was also a time of the Black Panthers, the Symbionese Liberation Army, the Weathermen Underground; the incarceration of Angela Davis and George Jackson. As a Resident Deputy Sheriff for five years, I investigated all calls on my beat (and sometimes adjoining beats) from barking dog or garbage-dumping complaints to murder. I was on call from my home or elsewhere 24 hours per day, five (sometimes more) days per week. In subsequent years, after two patrol cars and a court room were bombed, and the infamous kidnapping, shoot-out and murders at the Marin County Civic Center in 1970, I won my Sergeant's stripes and was second-in-command of our expanded Security Division for three years; shift supervisor in the Jail for five years; then Patrol and Administrative Sergeant for the balance of my regular employment. I also supervised (and was a "deck hand" for the Deputy in charge of) our Marine Patrol which consisted of a 29-foot "Farallone," two Personal Water Crafts and a flat-bottomed air boat. Then, on occasion, I was the skipper with my own deck hands. After "retirement," I continued with the Sheriff's Department for an additional three years, doing preemployment background investigations, then Court Security as a bailiff for a high-profile, high risk, double defendant trial; later still, general bailiff duties. My varied, unique and intriguing experiences prompted an inquiry from Mario Puzo, author of "The Godfather," about doing My Story. I was precluded from doing that by the then-current administration but began the creation of "Resident Deputy Sheriff, 1964 to 1969 . . . and then some." One of the stimulating aspects of my career is that I was fired for having posed as a nude figure model five years prior to being hired. I was President of our Deputy Sheriff's Association at that time, five years after being hired. Needless to say, it created quite a stir locally and is still recalled by the press and others from "back in the day." Earlier, formulative life experiences included riding in the back of a Greyhound bus from New Orleans through the Deep South to Washington, D.C in 1958, long before Rosa Parks refused to give up her bus seat and the three young Civil Rights workers were murdered. Other passions have included working on family farms in New York and cattle ranches in Northern California; riding bareback broncs in rodeos; having been a volunteer crew member on a Tall Ship off and on for seven years; sailing my 41-foot Islander ketch single-handedly and, currently, riding my green Harley-Davidson Ultra-Classic motorcycle in a Native American motif. I now reside with my gorgeous, tolerant and supportive wife, Irene, in the tiny town of Rough And Ready in the Gold Country foothills of California. I remain active within the local business and social communities and the law enforcement/fire suppression fellowship; I still pack a "hog leg" and we have our own extensive firefighting equipment. Being a volunteer firefighter while a Resident Deputy Sheriff and, later, assigned to the Great Oakland Hills fire, ensured the latter interest and preparation. Our little town has been devastated three times by fire storms. I welcome your comments and criticism but, remember, No Mea Culpa.