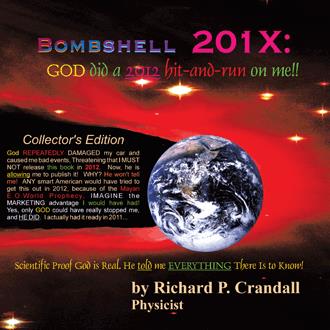 I never intended for there to be TWO authors of this new book (myself, and NOW, God).  It was first written by me alone to show the massive correlation of my new scientific theory of the sub-structure of the Proton with the numbers and STRUCTURES found buried in the Christian Bible's BOOK OF REVELATION.  I have actually, through the tools of science and mathematics, been able to PROVE that GOD did and does exist, and HE wrote the BIBLE!

HOWEVER, and IN ADDITION, HE (God) wants to prove to the World that HE did in fact live with me, for over a year, and HE told me many, many awesome things!  The reader will see, also, that HE has done a VERY good job at proving just that! 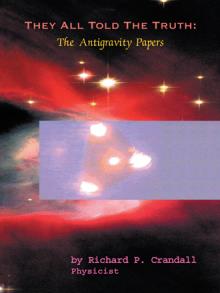 They All Told the Truth
Richard Crandall
$95.00

This is my second book. My first book, They All Told the Truth, describes how I developed an advanced physics theory of matter and energy that unifies all the other mainstream physics theories. It is truly and correctly the long-sought-after grand unified field theory. It was calculated mathematically using legitimate and accepted physics methods. Years later, I was bored one day and just happened to pick up a tattered Christian Bible and was browsing through the Book of Revelation. I was so shocked at what I saw that I fell out of my chair! I saw that the essential physical numbers from my new physics theory were all in there and were repeated over and over and over. Like a message. There was exact correspondence as there were no numbers missing, nor were there extra numbers that didn’t belong (with one exception, which was the number 666)! I had stumbled upon the greatest discovery in modern history. The implications are enormous as they prove scientifically (physics) that God and Jesus are real because their signatures are in there! No one else during those times that the various Bible books were written could have possibly known to put those specific numbers in there. Religion and science will now be unified from this time forward, starting from here.