HEROES OF THE TRANSITION 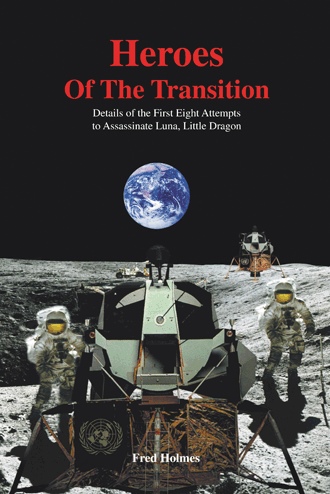 In this scenario, China’s bourgeois authoritarian ‘Communists’ fell in 2001. In the following elections a pro-United Nations social democratic party – the Middle Way – won a majority, while the Chinese branch of the New Harmony Party, talking softly and carefully lest xenophobia be aroused, took 19% of the vote and sent 63 members to the People’s Congress.

With the advent of democracy, planning for a Han-Spar station to orbit in L-5 – a gravitational mid-point between Earth and moon – began in 2006. In April of 2010 contracted NASA shuttles from Cape Kennedy and enhanced Long March rockets from a launch site near Xichuan, Sichuan province, were used to get the prefabricated parts into orbit. It took Turquoise Ramsey and six other astronauts ten days to assemble the Dragon Nest in its most rudimentary form.

Approaching it in space, with Earth over your shoulder like a blue and white tennis ball, the first thing you would see is the parasol of mirrors, 150 metres long, that heats the turbine generator. Then there are long panels of photovoltaic cells, and utility pods where electricity is stored in nickel-hydrogen batteries, heat in reservoirs of molten salt. The main control room abuts the crew’s quarters. Astronaut Ramsey, daughter of two of the founders of New Harmony, works closely with Cheng Chou, 42, a handsome man from a village near Xi’an whom she has known since 2004, when he was a lieutenant-colonel in charge of a UN air unit on the Kosovian-Serbia border. (That was the year his parents, both doctors, were killed in a bus-truck accident.) She and Chou enjoy talking politics and playing chess in their spare time. He has recently given her a book of his poetry for her upcoming 39th birthday, and they have begun kissing and touching in private.

Because of Turquoise’s political connections, the rest of the crew has pretended not to notice as their romance deepened, the trysts becoming more frequent. Even Anna Weinstein, the mission physician, kept quiet. “Meet me in the cargo bay at 1400,” Turquoise had said to Chou that morning. (The station used GMT.) “Turn off the cameras. Lock the hatches,” she reminds him, as she puts on Connie Francis’ version of “Heartbeat” on a small MP, before shucking off her coveralls and underwear, as her long mahogany hair floats freely. “I want a baby before it’s too late,” she tells Chou again, as he clasps her buoyant body to his own. Without gravity, her breasts ride high on her chest, sleek as seals.

The news that Turquoise was pregnant raced through the leadership of Han-Spar, the New Harmony planning group, and the capitalist philanthropists allied with them – Bill Gates, Warren Buffett, Ted Turner, the currency wizard George Soros, and many others. New Harmony’s General Council sent a message to the Dragon Nest.

The maximum safe radiation for a pregnancy was judged to be 5 rem, whereas an astronaut could get 30 rem in that time with standard shielding. Worse still, solar flares could fling iron nuclei at half the speed of light, killing the human cells through which they passed. Turquoise was relieved of most of her duties in the moon exploration program and ordered to stay in heavily shielded areas. Han-Spar managers rushed to get pseudo-gravity for her and the foetus. First they sent up a relatively small cyclotron, which was all that was available. Work on the big rotational drum was intensified, and it was installed six weeks later. The heavily shielded drum, 50 metres in diameter and 30 metres long, rotated once a minute and gave rotational gravity on its inner wall. The managers also ordered tests with pregnant cats, hamsters, chimpanzees and rhesus monkeys.

Her work was limited, but Turquoise still did an hour a day on a treadmill. Her daily medical check-up took at least an hour; two while a persistent dehydration problem was dealt with. In her free time she played Scrabble, chess, or bridge with off-duty crew members, or just chatted while they sampled the fruit and nuts sent to the expectant mother on monthly shuttles. Turquoise talked on the coded videophone to close friends on earth and to her mother and father at New Harmony’s first base, northwest of Toronto. She also read numerous books on screen and got caught up on back issues of the New York Review of Books. Public interest was focused on the Green Daughters of the Red Dawn, an all-women American-based eco-terrorist group, and on the new Japanese-American moon base and the promise of cheap fusion fuel in helium 3, found in great abundance on the lunar surface. There was much debate about whether the riches of the moon belonged to the UN or to the mining and energy companies that were planning to extract it. In Turquoise’s sixth month the news leaked beyond Han-Spar and New Harmony. DRAGON ASTRONAUT PREGGERS and MOON CHILD DUE IN THREE MONTHS, the tabloids shouted. ZERO GRAVITY DEPRAVITY– SPACE BABY SIRED BY ALIEN, one claimed. Medical ‘experts’ interviewed on TV gave contradictory opinions. In Las Vegas the odds of live birth were 2:1 against, and that the child would live one year, 4:1 against.

Most Canadians were familiar with the old pictures of Turquoise that then appeared on TV and Internet. One when she was 20, in grimy overalls, holding a wrench beside her Spitfire at an air show near Hamilton, Ontario, while her turquoise-colored parachute was being folded. Another showed her in flying gear, with co-pilot Molly Moosomin, beside the restored CF-105 Arrow (found in twenty large crates behind a false wall in an old Avro plant in Malton, bought by Han-Spar and demolished in 1998) which they piloted in the CNE air show in August of 2001. There were pictures of Turquoise in the early nineties with the Canadian armed forces, flying F-18's around the base at Cold Lake, Alberta. More recent videos showed her rescuing a powersat and then a comsat for Spar-Nippon, and working in the International Space Station.

During labor Turquoise screamed in pain muted only by tetrahydrocannabinol and Chou holding her hand. She was in her room in the drum, surrounded by three doctors and their equipment. “Oh, my goddess!” she moaned, clutching a small tin ankh encased in clear plastic in her fingers. “Isis and Hathor, please help me, I beg.” In pain, Turquoise – an atheist – temporarily lapsed into the paganism the New Harmony planning group used to undermine Christianity. Then she was quiet and the child’s wails filled the room.

“Let the new era begin,” declared Anna Weinstein, when she set the washed infant in her mother’s arms. Thus Luna Amaranth Cheng-Ramsey was born in the Dragon Nest on March 11th, 2011, with an inertial mass of 3.3 kg. There were respiratory difficulties, and feeding problems related to the fact that gasses are not easily burped out in low gravity. Naturally the baby protested against the tube which had to be inserted into her stomach every four or five hours.

A week after her birth Luna came to Earth in a shuttle renamed Stork 1, which was fitted with a big titanium crashball filled with foam pellets, in a fireproof husk, to surround the mother-child module during landing. The baby wore a supportive ribbed space suit and helmet, and there was a tank of salty water into which she could be put to lessen the power of gravity upon landing. (The crashball, helmet and suit, donated by Han-Spar, are the most visited exhibit at the Smithsonian International Air and Space Museum in Washington.)

Heroes of the Transition is a secular humanist (atheist) novel with Luna, the first child born in space, at the center of a struggle to achieve democracy in all countries and to stop global warming.