A Couple’s Journey Back from Guillain-Barré Syndrome 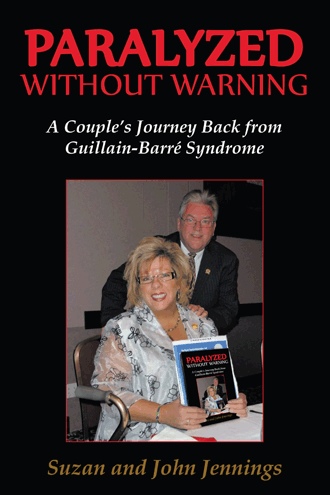 There we were at St. Paul’s Hospital emergency entrance, and all I wanted was my final and dying wish—a last smoke. My husband propped me up against the car as the paramedics yelled at him to move not only me but the car too!  My husband John placed a cigarette between my lips and attempted to manoeuvre the lighter with his thumb over the track, which in theory should have ignited the flame and my smoke. Picture this. I’m propped up against our car, which we’ve named Maxxi, a smoke hanging out of my mouth. The whole of my left side is completely paralyzed, and my right side is partially paralyzed and is quickly fading into numbness as well. My husband is trying, albeit not too hard I might add, to light my smoke. As a person who had never smoked before, he just could not make it work. There I was, slumped over, defeated and absolutely believing I was going in and never coming back out. By now, not only the ambulance drivers but the security guards were yelling at us. All I wanted to do was yell back at them something snarky, like, “Gee, dude, do you really think I want to be slumped over my car like this? While we’re at it, how about supplying a light and that will speed the whole process up, okay?” Unfortunately, my voice was already being affected, and I was barely audible. I was going in to die and I thought how desperately sad it was that even criminals on death row get their final dying wish—but no, not me! This was how the next five months of my life began.

John walked me in like I was a rag doll, although it was more like a shuffle and he sat me down and propped me up on a chair in the waiting area of the emergency room while he parked the car.  While sitting there, I was doing my absolute best to not fall over and was probably looking like someone who was terribly inebriated, as opposed to someone who was terribly ill. My thoughts were running away with me faster than I knew my legs could. I started to reflect on my life. What did I have? What was wrong with me? Is this how my life is going to end? In a funny-strange (not funny-ha-ha) way, I felt at peace because either way, it was where I needed to be. Minutes later (although it did seem like an eternity because I was working so hard to stay sitting upright), John came back, and we shuffled over to the triage nurse and began to explain my symptoms and how I was feeling. When we were finished, she asked me if I could walk over to the waiting area, but we suggested she hold one side of me up and John would handle the other side. Well, we didn’t get very far when bam! Down I went with my legs spread out, lying on the floor resembling a baby foal being born: one leg going one way and the other one in a different direction and unable to get back up. I truly think this saved my life. That is surely one quick way to get attention at a hospital—just collapse right there. I mean, they had no choice but to address my needs or walk over me. I was pleased they opted for option one. 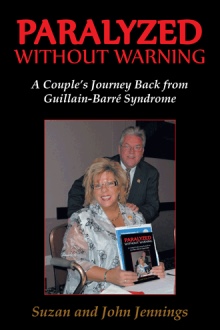 When the indomitable Suzan tumbled to the ground, so did her world—a world of endless high-paced activities as a hotel sales executive. The struggle through terrible times became their shared, heartrending story. It tells us much about love triumphing over adversity, aided and abetted by medical magicians. Although they had never heard of Guillain-Barré syndrome until it struck like wicked lightning, this book follows their journey to make as complete recovery as possible. Through Suzan and John’s words of candor and humor, readers become conversant with this little-known, uncaring, and improbable disease. This book is about unlikely survival, the revitalization of life for two people, and their sharing hard-won knowledge to ease the journey of others. It shows that even with daunting odds against recovery, it is possible to recover to inspire others facing this terrible disease.

Suzan and John Jennings experienced and dealt with a sudden onset of Guillain-Barré syndrome in 2008. Within six days, Suzan went from a tingle in her face to total paralysis from the neck down. She became an expert on the disease, its challenges, and how to work toward recovery. Suzan and John retired from successful careers, have been married for 10 years and recently moved to Parksville, on Vancouver Island, Canada to enjoy life with their dog Lady. Suzan continues to be a liaison for the GBS Foundation of Canada as well as being involved in advocacy issues for persons with disabilities. John (Mr. ChooChooTrain) is embarking on his life-long dream of building a model train layout in the garage and is enjoying life in the slow-track for now.