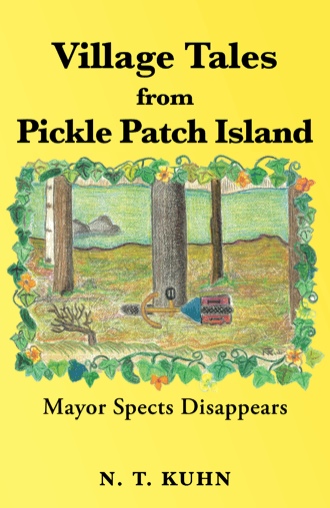 Chapter 1 FLASH PLAYS A PRANK The warm waking rays of morning sunlight began to seep in through the windows of the century old stone house; where the young dog Flash lay sleeping soundly on the foot of his mistress’s bed. Gently as the lemon yellow rays of light crept across Flash’s face he slowly awoke, yawned and stood stretching the length of his body. He strolled to the head of the bed to wake Miss Jenny who was still fast asleep. Nudging her arm with his nose he stood wagging his tail, watching, and waiting for her to respond to his wake up call. Smiling up at him as she opened her eyes, Miss Jenny wished Flash a good morning as he wished her the same. Flopping across her stomach for his morning tummy rub, which was his daily routine. Miss Jenny lovingly scratching Flash’s tummy said, “You lazy fellow. We don’t have time to dawdle this morning we have a lot to do before Mayor Spects arrives for his visit”. Twice a year Mayor Regimole Spects would come and spend a week at Miss Jenny’s and they would spend their time catching up on village events, taking walks into the hills, or working around her yard. Regimole and Miss Jenny have been friends ever since he was a boy and they met by accident one day when she almost stepped on him as she was going to pick blackberries. They now go berry picking as one of their favorite ways to spend a summer afternoon together. Miss Jenny and Flash headed down to the kitchen; after she showered and dressed; to have breakfast and finish the last minute preparations of the house. Once they arrived in the kitchen Flash headed outside for his morning run and Miss Jenny said she’d get breakfast ready and they’d eat upon his return. She set the table for breakfast and as she waited she began baking the cookies that she planned to serve for tea that afternoon when Regimole arrived. Pausing on the porch he took in the new morning. Flash is a medium-sized dog, with an umber- colored coat. He has a white stripe that runs between his eyes down to the pink birth mark on the bridge of his nose and a black muzzle. The under- side of his chin is white and blends to the patch on his chest. His fur is coarse; but has an unexpected softness of velour on the top of his head when you run a hand along his back. He has a broad muscular chest and neck. His body tapers slightly below the shoulder area and sleek defined muscles on the rest of his body. He’s very athletic and does everything as if he was running a race. He has a great curiosity about changes around him and anything new. He’s as mischievous as a child and loves to play pranks on his good friends. But his friendship is unwavering, and he will lay his life on the line and take dangerous risks to protect them from harm. Flash stood on the porch tilting his head into the crisp morning air to take in all the wonderful smells of the new day. He enjoyed this part of the day more than any other time. The grass was wet with the fresh morning dew and the fresh cool air made him feel so rejuvenated after a long nights rest. His nose twitched as he slowly moved his head left and right to take in the scents and smells of the travelers that passed in the night, the newly blooming spring flowers and fragrant trees of the surrounding woods. Flash shot from the porch as if he were catapulted by a giant slingshot and then raced around the yard with his nose to the ground taking in each and every smell one at a time. His morning romp finished on the side of the house where he dropped to the ground under the huge old oak. He rolled about in the soft luscious grass before coming to a rest on his back. While he lay in the plush grass, he began to day dream of a day two years earlier under this same tree when he adopted Miss Jenny. One very hot summer day two years ago, Flash at three months of age, had been dumped on the island and left roaming the woods to fend for himself. Hunger had begun to gnaw at him without any release and he felt that if a real meal wasn’t found soon his chances were obsolete on surviving much longer. After more than a month of scrounging for food and wandering deeper into the interior of the island, he came upon a large stone house with a lush green lawn and flower beds filled to the brim with every color of the rainbow. Looking upon the inviting structure before him, he saw a woman dozing under an old oak with its huge gnarled limbs reaching high to touch the puffy white clouds of the sky. She was in her early thirties, with short cut dark brown hair, dark brown eyes, and a medium build. Her height was indiscernible as she sat beneath the tree. Flash cautiously positioned himself behind one of the stone pillars of the fence surrounding the yard. He watched her doze until his longing for companionship pushed him to wander over and nestle into her lap where he slipped into a motionless sleep due to hunger and fatigue. Waking from her nap with a feeling of heaviness and aching in her legs. She looked down and a smile spread across her face upon seeing him cocooned in the folds of her legs. She gently stroked the velvet soft fur of his head as he slept.

Regimole Spects has purchased a new bike for his spring holiday, which he always takes the week prior to the annual Spring Fling, with Ms. Jenny and Flash. Due to a spill from the bike, he is forced to spend the night at his friend Todeous Bastian’s home, where he learns of some mysterious occurrences that have the residents of Cattail Pond worried. Soon after Regimole arrives at Ms. Jenny’s for his holiday, Chief McNaire arrives, and Regimole shares the concerns of their neighbors over the incidents at the pond. They decide to have Detective Daniel Squirrey investigate the incidents in the week to follow. The week-long investigation brings forth very little new evidence in solving the mystery. Sunday arrives, and Detective Squirrey considers skipping the Spring Fling, when the island is hit by an unexpected storm causing the event to be postponed. While Daniel, Chief McNaire, and other villagers spread the word of the postponed event, a heart-wrenching howl echoes across the island from Cattail Pond and is soon followed by the emergency alarm ringing at Ms. Jenny’s. With the immediate response of their neighbors, Flash informs everyone that Regimole has disappeared.

N. T. Kuhn interests include sketching, crafting, and reading. She is also an aficionado of quality animated movies and cartoon shorts. Her love for animals has influenced her art and given her a close bond with her dog, the inspiration for the character of Flash and his many enjoyable antics.