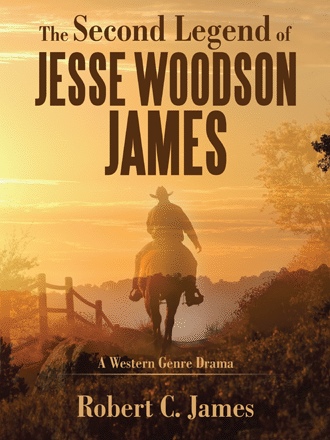 The True Story of this KING of all-time Historical Outlaws is guaranteed to change the history books before the 21st Century has begun. On the Monday morning of April 3, 1882 the World renowned notorious Outlaw was shot at the age of 35 years old and instantly killed by The Assassination of Jesse James By The Coward Robert Ford, ©2007. Or was he? Did he live another 70 years, until 1951 to hold his infant Great Grandson, Robert C. James, in his arms at age 104? What did Jesse do when he heard reports of his own death? Who was killed in his place? Was he a member of a Secret Society? Where is his gold? Where did he go, and what did he do? Where was he buried? Does it really matter that other people may want to know this information? The Second Legend involves adultery, inbreeding, a deathbed confession and a sojourn around the North and South American Continents of the World. The tale focuses on an outlaw who had been a “Robin Hood” type who spread his money around, especially to women in distress, in exchange for special favors, and then leaving babies in his dust. His legend certainly lives.

Currently, Robert C. James is a non-traditional student at Colorado State University – Pueblo. He is in college primarily to earn his Bachelor of Science degree in History. His five to ten year goal is: after graduation from college he will continue in his long-time business JamesSoftware7@aol.com called James Boys Victorian Software. Robert is an aspiring actor/screenwriter from Colorado. In 1978 when he was living and working as a power plant boiler operator at a paper mill in Port Townsend, Washington, he was approached by screenwriter Douglas Day Stewart, who wanted the James Family stories of Jesse James. Robert denied Stewart, who instead created the Oscar Award winning movie of An Officer and A Gentleman, ©1979 which was filmed in Port Townsend, portraying Robert, his wife Deborah, and their restored Victorian house, which was seen in it. The Film was released in 1982. The real story was that he was Honorably discharged from the U.S. Navy in 1969, Vietnam era as an Aviation Personnelman, in San Diego, California. Robert’s acting debut was in the Emmy Award winning movie, The Incident, ©1988 starring Walter Matthau, Harry Morgan, and Robert Carradine (who acted in The Long Riders, ©1980.) It was filmed in Colorado Springs in 1988, and released for Movie of the Week on TV in 1989. Robert acted as a U.S. Army WWII, Military Policeman and news reporter. From this experience, he decided to learn how to write it himself. Robert wrote the movie screenplay, The Second Legend Of Jesse Woodson James, ©1993 based on stories that were told to him by his Grand Father. He plans to rewrite the screenplay again for the Hollywood market. This is where the history courses at the university are important to him. He is a hands-on learner and also seeks the approval of others.