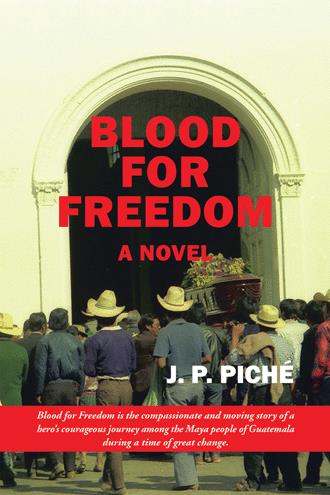 A SOCCER GAME (pages 70-72) A few weeks later, routine appeared to have taken over again in the region. People were no longer talking about the passage of the military convoy or about the strike that was still ongoing in banana plantations on the Pacific coast. Nobody wanted to raise the subject. It was with this in mind that Paul and Father Callaghan decided to invite the community youth to have a friendly game of soccer on a clear day. José agreed to grant leave to his students and referee the game since Father Callaghan had insisted on playing as a goalie. The latter also suggested that Paul do the same, to offer fair and equal chances for both sides, as he put it. So, on that sunny afternoon, they were twenty youngsters plus the two goalies and one referee, gathered on the dirt road running along the western side of the village, not far from the cemetery. Jute bags filled with sand were used as soccer posts. The fun started before the game began, when Paul protested because Father Callaghan had clothed himself in a black cassock to play goalie. “Why do you wear a cassock?” “To show on which side God will stand,” replied Father Callaghan. “It looks more like a sacrilegious act to me,” countered Paul. “You are certainly not in a position to judge,” added the priest. They all had a good laugh, and José finally called on the parties to start playing the game. “Okay now. Stop babbling, and start the game.” After Father Callaghan had stopped a few shots that should have passed between his legs, with his long cassock reaching to his feet, Paul told José that he was considering filing a protest based on cheating that should be attributed to the opposing goalkeeper. The youngsters were having a great time. At one point during the game, Arnoldo, who was playing on Father Callaghan’s team, left the rival defenders dumbfounded and suddenly popped up in front of Paul. Surprised by the result of his own feint and perhaps too nervous to make the most of this opportunity, he did not take the time to adjust his shot and the ball missed the goal. The ball rolled on the road for about fifty feet and disappeared into the ditch on the opposite side of the village. Jorge, who played as a defenseman on Paul’s team, ran to get the ball, but when reaching the side of the ditch, he froze, looking at the bottom, unable to speak. Alarmed by the behavior of the boy, Paul rushed over to his side. What he saw stunned and horrified him. The ball had stopped by the belly of a mutilated corpse lying at the bottom of the ditch. José turned to the other youngsters and told them to stay where they were, and then he and Father Callaghan rapidly joined Paul to see the macabre scene for themselves. José gently took Jorge by his shoulders to turn him away from the scene. The boy started to cry and buried his face in José’s shoulder. After a few words of comfort, José told him to go join the others. From where they were standing, they could see that the body was disfigured. The skin of the face had been removed, probably to make it more difficult to determine who it was. They were all in shock. Finally, Paul turned away from the scene and vomited. José went down to take a closer look. Father Callaghan made the Sign of the Cross and joined him. They both looked at each other, and their eyes spoke of a tacit understanding; they had identified who it was. “He has been tortured; some fingers are missing,” José said. Father Callaghan started to pray for the repose of the deceased, while José left the ditch to join Paul. Noticing that the latter had been sick, he asked, “You okay?” Paul turned to him, looking dazed and somewhat confused, without saying a word. José reacted immediately by grabbing him by the elbow and adopting a stern tone. “Come on, Paul; you should bring the youngsters back to the village.” “But we cannot leave the body there, as it is,” Paul said. “I know. But for now, we must leave it there.” José glanced to his right toward a wooden area on top of a hill approximately half a mile opposite from the village. “It is possible that somebody is spying on us right now. I will cover the body with leaves and brushwood.” The priest, who just came up from the ditch and heard the last part, agreed. “José is right. Nothing can be done at the moment.” “I will come back at night, along with others, to take care of the remains,” José added. Paul finally accepted and went to accompany the teenagers. José and Father Callaghan watched as the group moved off, then they went back down into the ditch. “You recognized him?” the priest asked. “It’s Eduardo. I saw him just before he left. These are the clothes he was wearing.” “That’s what I thought too.” “His wife must not see him like this.” “I have said the customary prayers for the deceased. I know you will act for the best under the circumstances.” He gave a last look at the body and left José, who started to cover it with shrubs present on both sides of the ditch.

For Paul Desilets, the suicide of his twin brother will mean a constant state of mental paralysis unless he finds a new vision of life and gains deeper insight into himself. After several months of spiritual retreat in a monastery, he decides to serve as a lay missionary among the Maya people of Guatemala. Soon after, he is sent to a small parish to help missionary priest Father John Callaghan fulfill his last assignment. Fascinated by the pre-Columbian spiritual and cultural traditions that still survive among the Mayas, Desilets gains valuable insights into their unique way of knowing about the world and human experience. But after just eighteen months of working with the Mayas, he finds himself caught in the midst of mounting political tensions when the fragile bridge between the indigenous population and the Ladino rulers threatens to collapse. Now it may not be enough to just live with the oppressed. He may also have to be willing to sacrifice his life for them. Will he be able to achieve his mission in a country run by a dictatorship and where foreign missionaries are suspected of having links with leftist organizations?

J. P. Piché was born in Montreal, Canada. After studying communication and cinema at the Université du Québec in Montreal, he worked in the film and television industry for more than twenty-five years. As an independent filmmaker, Piché produced and directed the critically acclaimed feature film, Sadhana—Back to the Source (www.sadhanafilm.com). Blood for Freedom is his debut novel.