East of the Hague Line 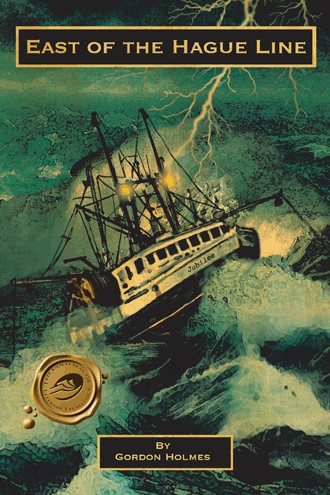 Reed ran his skiff up beyond the Jubilee up to a float farther up the wharf. They tied it off to a couple of open cleats. It was high tide, so they could throw everything up on the wharf. Chase was standing on deck straightening up some pen boards beside the main hatch. Anderson could see right away that Pat Chase was a big man. He had the look of a hardened fisherman. Right away you noticed his big hands. He weighed about 230 pounds, but there wasn’t an ounce of fat on him. When you first saw him, you thought, if you met him in a bar and a fight breaks out, I want this guy on my side.” Reed hollered, “Hey, Pat! How’s it going?”

“This is Tom Anderson. He’s the guy I was telling you and Joey about. He’s hoping to talk Joey into giving him a job and go fishing with us this trip.”

Anderson was stunned. He could feel his face flush with embarrassment. It was supposed to be all set for him to have this job. He thought, Jesus Christ, Skip . . . He should have known better than to trust his bullshit . . . Goddamn it all to hell. What a fuckin’ idiot he’d been to let himself get set up like this. Chase could see the look on Anderson’s face. Of course, he immediately felt bad for him. He knew damn well that Reed had been blowing smoke up this kid’s ass. Playing the big shot and now the jig was up. This kid was sure he had a job on the boat, and it was all bullshit. He knew how Reed was.

Chase said, “Anything like that’s Joey’s call. I had coffee with him at Becky’s about four this morning. He’s had so much work to do aboard here to get ready to go, I think he slept on the boat last night. He’s over to Bowen’s, picking up a new hanging bollard for the starboard side. That thing has been on its last legs for few months now anyway. Hey look, here he comes up the wharf. I guess you’ll get your answer soon enough, kid.”

Scanton jumped out of a little green Subaru station wagon. He went around back and started pulling a heavy cardboard box out on to the tailgate. Reed ran over and helped him with it. They carried the box over toward the rail of the boat. Chase came over, took the box, and lugged it down the deck toward the stern. Anderson thought it had to be the new bollard Chase was talking about.

Reed turned to Scanton and said, “This is my friend, Tom Anderson, Joe. He’s looking to get a job with us. He’s never been before, but he’s been around boats all his life. He’s a diver too. Pat and I can teach him what to do.”

Chase said, “Speak for yourself, Reed. I don’t know this guy from a piss hole in a snow bank, Joey.”

Anderson was watching Scanton’s face. He was a small man, but he had a look of absolute authority about him. He carried himself with the confidence that exuded from people that were always in charge. He had dark features and weather-worn skin. His hair was a dirty blond, and he was wearing a ball cap that had Ice and Fuel Services printed on it.

Scanton was furious. “Goddamn it, Skip, you know how I feel about green guys on the boat. I don’t take them. They’re dangerous as hell, and we’re going to put in some hard back-to-back trips. I can’t afford to screw around with this guy. No offense to you, kid. I’m sure you’re a nice guy, but Jesus Christ, Skip.” Scanton climbed down the ladder a couple of rungs, stepped on the rail, and jumped down on deck. He crossed over to the main companionway and disappeared inside.

Anderson said, “You goddamn prick, Skip. I can’t believe you’d set me up like this.”

Reed said, “Set you up like what? I never told you for sure that you had a site on this boat. People have to get their own jobs in this racket.”

“Fuck you, Skip. What am I doing here if you didn’t tell me I had a job, for Christ’s sake? I’ll take your skiff and head back home, you asshole.” Anderson’s face was bright red. He looked like he was about to take a swing at Reed.

Reed said, “Just hold your horses a minute. I’m going up to talk with Joey, and we’ll see what happens.”

Reed went aboard the boat and headed for the pilothouse. Anderson just stood there in a confused state of anger and disappointment. He felt completely betrayed.

Chase was on deck pulling the new bollard from the cardboard box. It weighed about a hundred pounds. He looked up at Anderson and said, “Come on down here and give me a hand with this thing. You haven’t got anything else to do for a minute or two.” Chase had already rigged a short piece of rope to the top of the gallous frame. It would support the weight of the bollard while he hung it in place.

Anderson said, “Sure, what the hell.” Chase told him to lift the bollard while he took up the rope. Once the huge cast-iron pulley was raised, he inserted the heavy shackle that would hold it in place. After they were through with the job, Chase said, “I saw what your friend Reed just pulled on you. Just relax a minute or two. If Joey calls you up to the pilothouse to talk to him, you may get a chance to have a job. We’ve all been talking about going four handed. If he doesn’t decide to have you with us, take that asshole’s skiff home like you said and leave it at the dock with a hole in the bottom of it.”

East of the Hague Line is an adventurous, dramatic and quickly paced suspense novel written about life at sea commercial fishing in the Gulf of Maine and the far reaching tempestuous North Atlantic.

Maine’s rugged Coastline is comprised of more than three thousand miles of bays, inlets, and peninsulas that create isolated close-knit fishing communities. The people who live in these seaside towns have one thing in common, a deep-rooted bond with the ocean.

East of the Hague Line takes a close personal look at what it takes to live the life of an offshore fisherman. Writer Gordon Holmes, a Maine native, captures the rhythms and tensions of life aboard a commercial fishing boat.

The crew of the fishing vessel Jubilee is comprised of four hardened fishermen, hopeful for good fishing, whose loved ones wait at home, fearful for the lives of their men.

Fishermen depend on a good catch to earn their living… but what happens when manipulation, deceit and betrayal by a trusted crewmember changes the tide?

Young Tom Anderson fulfills a lifelong dream when he signs on with Captain Joseph Scanton to go fishing aboard the Jubilee on the North Atlantic. He gets far more than he bargained for when his captain is forced to take his boat and crew into a perilous situation in uncharted waters east of the Hague Line. Scanton’s decision puts their freedom and their lives at stake as they sail into a trap that will change their destiny… forever.

Gordon Holmes grew up on the coast of Maine and spent his early years living and working on the ocean. He joined the US Navy in 1968 and is now a real estate broker. He has two sons, a stepson, and four grandchildren and lives with the love of his life, Katherine, on Cousin’s Island in Yarmouth, Maine.