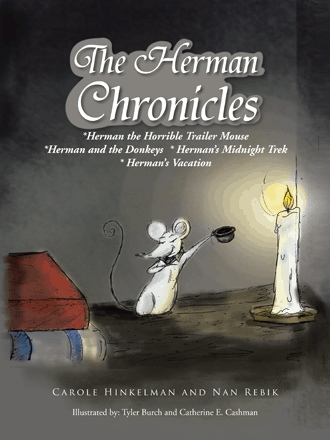 Herman was curious and after weeks of sniffing around,he found a way into the trailer! It was magnificent! It was large, from a mouse's point of view, and filled with treats of all description. Now Herman was friendly enough but he really made a mess in the trailer and the people who came to vacation there became really angry at him.

Herman is a likeable mouse who enjoys living the high life. He has a nice family, a wife, a son, twins and his grandfather. They live in the woodpile next to the cook shack. The four stories in the Herman Chronicles lead us through the adventures of Herman and his family. In the first book they invade a travel trailer lured by free food and easy living. In the second book, the mice find a way to get food delivered to their doorstep. Next, when the donkeys return to their farm, Herman leads an expedition to visit them there. Finally, in the last book, Herman and his family are inspired to go on a vacation to a place they hope will be as wonderful as the Florida postcard Herman found.

Carole Hinkelman and Nan Rebik are senior citizens who worked collaboratively on line to develop these stories. Carole is a retired educator living in Brooklyn, New York and Nan lives in the southern California desert where she teaches music in the public schools and privately at home. Last summer, Nan's travel trailer was invaded by mice. While complaining about the problems caused by those mice, we decided to write the story of Herman the Horrible Trailer Mouse - a struggle between mice and humans. Herman is a mouse who enjoys the comforts of trailer living and easy access to gourmet dog food. We had so much fun writing that story that we continued with Herman and the Donkeys, The Midnight Trek, and Herman's Vacation.