A Matter of Weeks rather than Months

The Impasse between Harold Wilson and Ian Smith Sanctions, Aborted Settlements and War 1965-1969 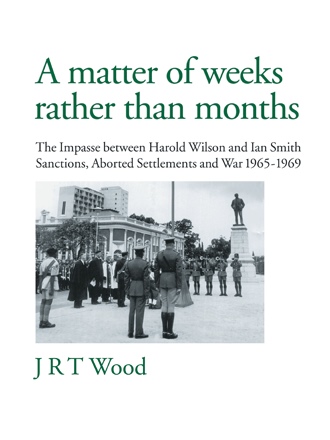 Founded on 35 years of research into o the post-1945 Anglo-Rhodesian history, this book complements Richard Wood's The Welensky Papers: A History of the Federation of Rhodesia and Nyasaland: 1953-1963 (1983) and So Far and No Further! Rhodesia's bid for independence during the retreat from empire: 1959-1965 (2005). Of So Far, Michael Hartnack wrote that 'Once in a lifetime comes a book which must force a total shift in the thinking person's perception of an epoch, and of all the prominent characters who featured in it.' A Matter of Weeks Rather than Months recounts the action and reaction to Ian Smith's unilateral declaration of Rhodesia's independence, the second such declaration since the American one of 1776. It examines the dilemmas of both sides. Smith's problem was how to legitimise his rebellion to secure crucial investment capital, markets, trade and more. His antagonist, the British Prime Minister, Harold Wilson, was determined not to transfer sovereignty until Rhodesia accepted African majority rule in common with the rest of Africa. Given British feelings for their Rhodesian kith and kin and Rhodesia's landlocked position, Wilson eschewed the use of force. He could only impose sanctions but hoped they would defeat Smith 'in a matter weeks rather than months'. The Rhodesians, however, evaded the sanctions with such success that they forced Wilson to negotiate a settlement. Negotiations were nevertheless doomed because the self-confident Rhodesians would not accept a period of direct British rule while rapid progress to majority rule was made or the imposition of restraints on powers they had possessed since gaining self-government in 1923. In tune with their allies in the African National Congress of South Africa, the Rhodesian or Zimbabwean African nationalists had already adopted the Marxist concept of the 'Armed Struggle' as a means to power. Sponsored by the Communist Bloc, its surrogates and allies, they began a series of armed incursions from their safe haven in Zambia. Although bloodily and easily repulsed, they would learn from their mistakes as the Rhodesian forces would discover in the 1970s. Consequently, this is a tale of sanctions, negotiations and counter-insurgency warfare.

John Richard Taylor Wood, BA(Hons) (Rhodes), PhD (Edinburgh), FRHistS. Dr Richard Wood was born in Bulawayo, Zimbabwe (then Southern Rhodesia). He was educated at St George's College in Harare (then Salisbury), Rhodes University in Grahamstown, South Africa, and Edinburgh University, Scotland. He was a Commonwealth scholar and is a Fellow of the Royal Historical Society. He was the Ernest Oppenheimer Memorial Research Fellow at the University of Rhodesia and a Professor of History at the University of Durban-Westville, South Africa. This book, A Matter of Weeks Rather than Months: Sanctions and Abortive Settlements: 1965-1969, is the product of 37 years researching the history of Rhodesia. Given exclusive access to papers of the former Prime Minister of Rhodesia, Ian Smith, this is the third book in a series covering the post-Second World War story of Rhodesia. The other two volumes are The Welensky Papers: A History of the Federation of Rhodesia and Nyasaland, 1953-1963 (1983) and So Far and No Further! Rhodesia's bid for independence during the retreat from Empire 1959-1965 (2005). He is at work on a third as yet untitled volume covering the period 1970-1980.

He is also a military historian, having served as a territorial soldier in the 1st and 8th Battalions, the Rhodesia Regiment, and in the Mapping and Research Unit of the Rhodesian Intelligence Corps. He has published The War Diaries of André Dennison (1989), numerous articles, conference papers and chapters in books, including in a forthcoming book on counter-insurgency.