EVEN WITCHES HAVE Names 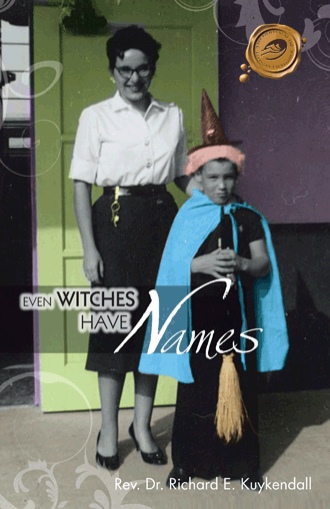 I don’t need to tell you that witches have been receiving bad (to say the least) publicity for years—make that centuries! They have been portrayed and stereotyped as no less than monsters since Christianity sank its teeth into “pagan” Europe. And every Halloween we are still reminded of the fact that society as a whole still sees them through medieval eyes. Most of us are aware of the fact that the “Holy” Inquisition was responsible for torturing and killing thousands of “so called” witches. Even our forefathers and mothers here in America continued in this tradition of ignorance by doing likewise in the celebrated Salem Witch Trials. But it didn’t end there—it never really has ended. To this very day—even as I write, witches are still portrayed by many as fiendish individuals who aren’t worthy of life. As the “Good Book” says, “You shall not allow a witch to live” (Exodus 22:18). And though our treasured religious freedom prevents us from burning witches today, there are some people (read: “fanatical Christians”) who would have them put to death if they could, and most conservative and evangelical Christians actually do believe they will burn in the fires of Hell. It’s strange that in a time when civil rights prevent Native Americans, African Americans, Hispanics, and Asians from being stereotyped in advertising—in a time when people of different sexual orientations are fighting to be looked upon as normal human beings—that witches are still portrayed as ugly women with warts on their noses, with broomsticks and pointed hats, cackling over cauldrons and casting spells upon the unwary, and to the ignorant they are even seen as the servants of Satan himself! Gabriel Seminger definitely does not fit this description. First of all he is a man, and male witches are not “Warlocks”—they too are called witches. Secondly he is not a servant of Satan. Rather, of all things, he was a Christian minister who was committed to what Matthew Fox calls, “Deep Ecumenism.” And what is Deep Ecumenism? In the early part of the 20th century, there was a movement among many Christian denominations to put aside their doctrinal differences and work together for the common good. This movement was called “The Ecumenical Movement” which gave birth to such organizations as the World Council of Churches. Matthew Fox however felt that the Ecumenical Movement wasn’t going deep enough. Hans Kung once said that until there is peace among the religions there will never be peace among the nations. Fox was saying that ecumenism can no longer work with just Christians of different denominations working together, rather the time has come when those of all faiths must put aside their differences and work together for the common good, and ultimately for world peace. This being said, it is no surprise that Gabriel and his wife, Ava did graduate work at Matthew Fox’s “Institute for Culture and Creation Spirituality” at Holy Names College in Oakland, California. Here they studied Wicca (a more common name for witchcraft today) with Starhawk, one of the most well known witches of our time. They also took classes in ritual making with a Priestess of Oshun named, Luisah Teish, and studied Native American spirituality with Jose Hobday, a Native American Franciscan nun. And of course they took many classes with Matthew Fox himself. And so it was that by the time they finished their studies Gabriel was a different kind of Christian minister—one who felt no conflict in being both a Christian minister and a Witch. And Ava was the perfect partner in their work together. Most of the problems witches have to deal with is due to ignorance—in not knowing what witches are all about—and in accepting unquestioningly the stereotyped images that have been fed to us from our very childhoods—remember the Wicked Witch of the West? Its time that the spell be broken that was cast upon us not by evil witches, but by our culture’s spokespeople: preachers and advertisers—story-tellers and movie-makers—and all of the misguided Christians who have perpetuated this lie. It’s time that you hear the truth—from two witches’ mouths. Then you can judge for yourself if what you have been taught is true. And what I think you will find when you hear Gabriel and Ava’s story is that Witchcraft or Wicca is simply a spiritual path, no less than Christianity, and that “evil witches” are no different than Christians gone bad—and we’ve seen quite a few of them throughout history—even in our own life times. You see, witchcraft is not evil, it’s just a spiritual practice, and it depends on the hearts of those who use it whether it accomplishes good or evil in the world. In my own experience I have found the witches I have known like Gabriel and Ava were just as committed to doing good in this world as any Christian. What follows is a personal account of how Gabriel Seminger, who had felt called by God to the Christian ministry came to be a practitioner of witchcraft, and how he and his wife came to see that these two systems of belief are not mutually exclusive.

Even Witches Have Names is a short fictional work based on facts. It tells the story of a Christian minister who was also a witch and the work that he and his wife did in building a bridge between witchcraft and Christianity. It tells the story of Gabriel Seminger’s life and work and in the process teaches the reader many of the rituals of witchcraft, or Wicca, as it is called today. This book is a good read and a good teaching aid as well.

The work that Gabriel and Ava did together did much to help others see witchcraft as a valid and positive spiritual path. More than this, they succeeded in removing the stigma attached to witchcraft and threw out the time-worn stereotypes that were born out of superstition and ignorance. Gabriel is now dead, but he has left his legacy in the books that he has written that will continue his work and in the lives he has changed. And Ava also continues to teach and carry on the work that she had done with her husband. Though they are now separated by the veil that separates life from death, they are yet united in spirit. And for Ava, because of her belief in reincarnation, she knows they will work together again—it’s only a matter of time. Richard E. Kuykendall Auburn, California