THE JOURNEY OF THE SPIRIT OF THE RED MAN

A MESSAGE FROM THE ELDERS 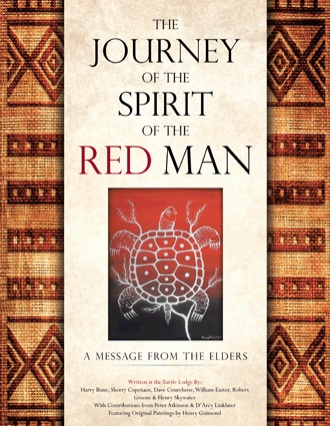 We, the Elders, have done our best to represent our Red Nation as Ojibway, Cree and Dakota. We take full responsibility for what we have shared and written in the following pages. We present this story knowing it is an attempt to capture the fullness, richness and beauty of the Red Nation. We have attempted to share our understanding as the Red People. We acknowledge the fact that we could never transfer our way of life through written words alone. We are an oral people. Sacred law cannot be written. It must be spoken and heard. Our way of life is meant to be lived and experienced. Our words are meant to inspire and guide our fellow human beings to follow the path of the heart. We believe that the Creator has always been within our reach and that we have to connect to the Earth to be guided to our true purpose. We believe that the spirit of the original Red Man was lowered to Mother Earth and our spirit chose to be born on Turtle Island. In all our languages, the Red People are referred to as the People of the Heart and the Land. We do not own the Earth. How can anyone own their Mother? We owe our existence to Mother Earth. This story tells of our human life and journey until our return back to the spirit world. There are many Creation stories. We are told that every Creation story is true. How do we know this? We know this because the Creator told us this. The Creator comes to us through our dreams and our visions, and through the actual voice of the Earth itself. The trees speak to us, the animals speak to us. For us as the Red People, we regard nature as the voice and face of the Creator. This book has been written by those of us residing very close to the geographical centre of the continent of Turtle Island (North America). At the very centre lies a very ancient sacred site, Manito Api, which the Red People of this area refer to as “Where the Creator Sits.” It is located in the Whiteshell Provincial Park at Bannock Point, Manitoba, Canada. Since time immemorial our nations have gathered on our sacred sites. They gathered to share knowledge, ceremonies, prophecies and dreams, dreams that affected all peoples. “Where the Creator Sits” is a very significant sacred site of pilgrimage where the people had gathered to stay connected to the spirit and the land. When we activate the sacred site through our prayers and connection, we activate our own spirit as we connect to the spirit of the Creator in the land.

We, the Elders, have done our best to represent our Red Nation as Ojibway, Cree, and Dakota. We present this story knowing it is an attempt to capture the richness and beauty of the Red Nation—a people of the heart and the land. We are an oral people. We cannot transfer our way of life through written words alone. Sacred law must be spoken and heard. Our way of life is meant to be lived and experienced. Our words are meant to inspire and guide our fellow human beings to follow the path of the heart. We believe that there is one Creator for all, that there is one Mother Earth that sustains all of us. We do not own the Earth. How can anyone own their mother? We owe our existence to Mother Earth. We believe that the spirit of the original Red Man was lowered to Mother Earth and our spirit chose to be born on Turtle Island. This story tells of our human life and journey until our return back to the spirit world. We believe the Creator has always been within our reach and that we have to return to the Earth to be guided to our true purpose.

The following authors and contributors – Elders from the Ojibway, Cree and Dakota Nations – met many times inside the Turtle Lodge to share and bring out the teachings and knowledge found in this book. The Turtle Lodge is a place of learning, healing and sharing ancient Indigenous knowledge for all peoples, focusing on the youth. It is located in Sagkeeng First Nation, Manitoba, Canada, and was built based on a vision received by Elder Dave Courchene (Nii Gaani Aki Inini – Leading Earth Man). More information on the Turtle Lodge can be found at www.theturtlelodge.org and on our Facebook page at The-Turtle-Lodge. Peter Atkinson - Dabasaaniqwat (Low Cloud) is from the Turtle Clan and has entered the Midewin lodge twice. Born in Roseau, Peter has a large family and does various ceremonies. He enjoys sharing teachings that were passed on to him. Peter believes that the only way to effect change within our people is to follow the example of his ancestors, who left for us a positive way of thinking and many beautiful teachings. It is very important for him to share with our younger generation, as they will be the generation that will bring the teachings into the future. Harry Bone (Giizis-inini from the Mikinaak Clan) is from Giizhigoowining (Keeseekoowenin) in Treaty No.2 territory. Fluent in Ojibway and English, he was the former Chief of Keeseekoowenin First Nation, CEO of West Region Tribal Council and Director of Education of Keeseekoowenin and the Manitoba Indian Education Authority. Elder Bone has a special interest in the Treaties, specializes in First Nations Government, and has led delegations that have met with all levels of government. He has been instrumental in furthering the Treaty Education Initiative, Oral History Project and Historical Atlas of First Nations in Manitoba. Sherry Copenace – Nii zho sake and Sa gi ma Kwe, Atik dodem (Elk clan) – was born and raised at Ojibways of Onigaming First Nation. She was raised by her parents, John and Evelyn Copenace, and lived next door to her paternal grandparents, Shawon and Mensinoiwshkung, who were very influential and provided many Anishinabe teachings to her. Sherry is a firm believer and supporter of the Anishinabe way of life and speaks the Anishinabe language. She is the keeper of Paabamasagaa – the Treaty 3 Peoples Drum. She belongs to a large extended family and has two daughters, Gwen and Kara, and three grandchildren, Robyn, Valec John and Evey. Dave Courchene - Nii Gaani Aki Inini (Leading Earth Man) has travelled internationally, carrying a message of hope and peace. Dave created a special place for sharing ancient Indigenous knowledge - the Turtle Lodge - based on a vision he received many years ago. Dave was recently honoured at the 2010 International Indigenous Leadership Gathering, received a National Aboriginal Achievement Award and the Volunteer Manitoba Award for Outstanding Community Leadership (2012). In 2011 Dave shared the stage twice with the Dalai Lama in New Jersey and Monterrey, Mexico, to share a message of peace. Recently he has initiated International Roundtables Supporting Ancient Indigenous Knowledge, co-led by US Congressman Dennis Kucinich, and the annual Makoose Ka Win and Vision Quest rites of passage for youth. William Easter is a Swampy Cree Elder from the Chemawawin First Nation. Robert Charles Greene was born and raised on reserve in Iskatezaagegan No 39 IFN, where he is a recognized Elder of the Anishnabe Nation. He attended and survived Cecilia Jeffrey Residential School and graduated with honours from Beaver Brae High School in Kenora, Ontario. Elder Greene has been employed as an Elder at the Selkirk Mental Health Centre and Ochi-Chak-Ko-Sipi Healing Lodge in Crane River First Nation. D'Arcy Linklater was born in Nisichawayasihk (Nelson House) and raised by his grandparents who taught him to live openly like the water and the river to experience life to the fullest. His great grandfather, Chief Pierre Moose, made the Adhesion to #5 Treaty with the Crown in 1908. D'Arcy has worked as a trapper, fisherman, hunter and miner. He has been executive director and an elected leader for his Cree Nation for over fifteen years. Henry Skywater is an Elder of the Dakota Nation, from Birdtail Sioux First Nation.His grandfather was his role model who introduced him to the traditional way of life, showing him “our way,” as he “had it in his heart”. Henry gives credit to the influence of many Elders in his life even when he was young and did not see the significance they have in people’s lives.Henry appreciates the importance of “Sun Dancing and Sweat Lodges.” Henry is very pleased that our people are beginning to use our history, traditional ways and teachings. “A very positive move,” he has a vision that it will continue in our communities and homes.