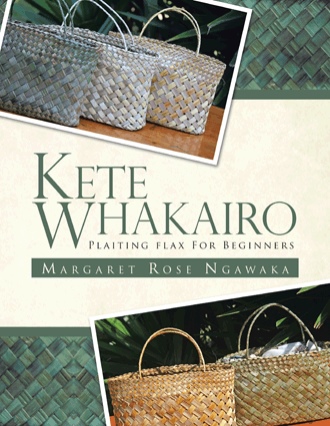 The Maori are the indigenous race of Aotearoa, more commonly known around the world as New Zealand. Raranga is the plaiting technique used by the Maori. Where the leaves are made pliable from the harakeke, kiekie, pingao or kouka and are evenly stripped, then laid out diagonally during manufacture. The hands are included as an anchor while the fingers manipulate and plait the stripped fibers. A technique called ‘whiri’ was the more common practice of the Maori folk art raranga in producing a form of basketry. But to use the word ‘basketry’ to describe raranga is not entirely correct especially when explaining raranga to an international audience of interest, or even to our own nation. Raranga has been mistakenly confused with weaving. When weaving is in progress, the warps are worked vertically and the wefts horizontally. Raranga uses the plaiting technique, the warps and wefts are worked diagonally. The strips pointing to the right are known as dextrals. The strips pointing to the left are called sinistrals. True weaving uses a loom, but raranga like plaiting is manufactured entirely by hand, especially the fingers. The technique shown in this step by step instruction book is known as ‘Kete Whakairo’-meaning patterned bag, a decorative hand bag used more for ornamental than the ‘mahi kete’ which is used for work. Pre-European time, Raranga in its various forms of kete were used by the Maori to carry their food, belongings and treasures. Colonization introduced manufactured materials and readymade baskets, suitcases and trinket boxes, raranga or kete plaiting soon declined. As the Maori conformed to the new ways of Colonization and European lifestyle, many customs and articles made by the Maori were discarded or adapted to the using of modern synthetic materials. But the humble kete has continued to be useful. Te Rangihiroa, known in English as Sir Peter Buck, (1877-1951) anthropologist was the first to successfully translate and document the Maori terminology ‘raranga’ into English.. Even to be recognized abroad, internationally. Knowledge of raranga plaiting was once passed down from mother to daughter and those threads of knowledge were kept within family lineage and never exposed to those outside of their tribal areas. Skills and techniques of kete whakairo or raranga were definitely closely guarded in the past. But, in the twenty second century, woman with skill and expertise in raranga/plaiting cross tribal boundaries to share and pass on their traditional (and contemporary) techniques to whoever desires to learn the skills of plaiting with flax. Both men and women alike attend workshops around Aotearoa (New Zealand) working together to produce traditional and contemporary raranga. These exciting developments are taking place today as we share our knowledge and grow together, keeping our heritage alive and well. In today’s ever changing society we have tutors teaching traditional raranga while other tutors teach with more modern-day ideals. Their teaching raranga in a more modern world with modern ideals but still structured deep in the basic fundamental roots of raranga. I was privileged to have been taught raranga by both, tutors who taught strictly traditional and other tutors teaching a more contemporary style. This book is a step by step guide to plaiting a kete whakairo. There are many different methods and styles, regional or individual preferences but the end result is the same.

Anyone can learn to plait a kete whakairo from the long blades of harakeke, commonly known as New Zealand flax. This book Kete Whakairo plaiting flax for beginners gives detailed, step by step instructions and illustrations for plaiting a beginner's version of this type of kete.

Margaret Rose Ngawaka first became interested in her native craft of plaiting when a group of tutors were invited to teach women in a small northern community on Great Barrier Island, New Zealand in 1998. Margaret Rose has maintained this traditional art and skill. She continues this folk art of Raranga by teaching others who are interested.

Margaret Rose Ngawaka- Iwi (Tribe)—Ngati Porou, Kahungunu, and Rongomaiwahine I live on a 148-acre offshore island on the west side of Great Barrier Island, Hauraki Gulf, New Zealand, where my husband and I have raised our seven children. Living here so remote has the challenge of not being able to attend courses of learning on the mainland (New Zealand). But I continue to strive for knowledge and understanding and seek out whatever opportunities come my way. I learned raranga in 1998, but it has been in my blood since birth. My journey with harakeke is entwined with my whakapapa (family history). When I learned to plait, I found an aunt I have never met who was an expert weaver of her time. When I learned piupiu (traditional Maori kilt), I was given a photo of my great-grandmother wearing her piupiu and learned she was a matriarch weaver of her time. This confirmed also that she was giving me permission to carry on with this treasured skill that she once excelled in. When I learned taniko, it was my mother’s sister, Aunt Hiria Okeroa Waaka, who taught me. My aunt Hiria has fond memories as a young girl being chosen to go pick kiekie and harakeke with her grandmother (my great-grandmother).This reminds me of my duty and responsibility to teach raranga and inspire hope for future mokopuna—grandchildren/posterity. There are many women more experienced and skilled than I who could have written this step-by-step book. I feel so blessed to have seen this opportunity and ran with it. I always say, “If it’s meant to be—it will be.”