FROM CONCEPTION TO ADULTHOOD AND TO HIS FINAL DESTINATION 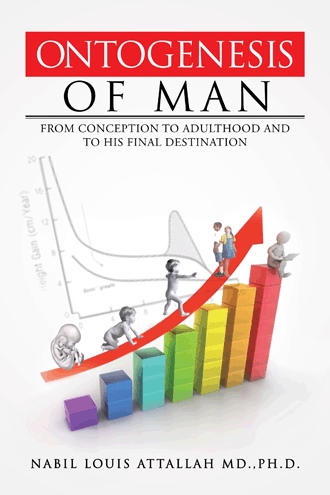 The entire sequence of events in growth and development of man begins early in life when one single cell called the ovum is fertilized by a single sperm to form the embryo. Growth has a dynamic nature, it is the study of human beings as they grow and mature physically, physiologically, mentally, and socially. Through a series of complex fascinating changes occurring during infancy, childhood, and adulthood, the child is modeling his characteristics and progresses from dependency to increasing autonomy changing its shape and body proportions to become a man or a woman. No two children, except, identical twins grow in the same way, yet all follow a similar pattern. In the uterus, the fertilized ovum start to grow and differentiate to form the different structures of the fetus, after birth growth of the infant continues through a series of fascinating changes which takes place during infancy, childhood and adolescence, it never stops before reaching maturity, and it is not a uniform process and differ from one stage to another. During the whole cycle, growth is not a uniform process, the child does not grow at the same rate, (all of a piece), different components of the body grow at different rates to change the proportions of the baby to those of the adult, at birth the head forms one quarter of the length of the baby, while in adults it forms only one eights of the total height of the body. From birth onward , the lower limbs and the trunk grows by a higher velocity than the head , so the shape of the child changes, the head becoming much smaller and the legs becoming proportionally much longer. During the period of growth the head is advanced over the trunk, the trunk more advanced than the lower limbs in its progress towards adult size , also the upper limbs are more advanced than the lower limbs, At an given age girls are advanced along the road to maturity than boys , and remain ahead till puberty, this male retardation is assumed to be due to genes on the male sex chromosome. The pattern of growth curve is the same in all normal healthy children, they grow quickly during the first year of life by about 25 cm/ year, then the velocity of growth decelerates gradually every year, about 15 cm/ year during the second year; 9 cm / year during the 3rd year; and 7 cm /year between 3-4 years( pre school age). This is followed by a period of regular growth at a slow rate, during which the child grows by about 4-5 cm/ year between 5-8 years (school age ), this is a quite time of growth and a calm period in the developing of children , the rate of growth then becomes fairly steady with slight overall downward trend till the onset of puberty.

This book describes the mysterious story and the sequence of events involved in growth and development of man, which start to take place early during conception when one single egg is fertilized by one single sperm to form the embryo, who continues to grow and mature inside the uterus of its mother for ten lunar months. After birth, through a series of complex, fascinating changes acting in concert together during infancy, childhood, and adolescence, the child is modeling his or her characteristics and progresses from dependency to increasing autonomy, changing his or her shape and body proportions from those of the baby to those of adults to become a man or a woman. With the onset of puberty, shortly before the end of the growth period, dramatic changes occur to the growing child involving physiological, mental, and sexual changes triggered by maturation of the sex glands and the endocrine system. These events are important to the child, his parents, and the community. There is marked acceleration of growth known as the adolescence growth spurt, appearance of second sexual characters, and onset of menarche in girls. At puberty, sex dimorphism is made clear, like wider shoulders in males and larger hips in females. Different stages of puberty occur at different ages in different children, depending whether the child is early or late maturer, and the sequence in which they occur varies from one child to another. Some pass through the whole sequence of changes quite quickly while others take much longer to do so, but all are normal variations among healthy children. The problems of early and late maturation and chronological and physiological ages among children and its social impact are discussed. This period is the most crucial period of life, physical maturation is reached, internal conflicts flare up, adolescents feel a desire to abandon childhood security and become independent long before they are able to handle the complexities of life. Many factors are involved before and after birth. Man is considered the product of the interaction between his genetic makeup and the environment in which he is born and lives. Secular trend toward increase in size and early maturation from generation to generation was discussed as well as the effects of modern technology and how it changed the way children live nowadays. Applicability of growth data in fields other than community child health like ergonomics, garment industry, and athletics was demonstrated. Brief description of the common growth disorders was given. After adulthood comes elderhood. Signs of aging start to appear. End of independency and second childishness bring man to his final destination, which mark the end of a process of growth, which, since middle life, has been fighting a losing battle with the forces of degeneration. This is one that every living organism in our planet has experienced.

Nabil Louis Attallah, MD, PhD, is a professor of anatomy, embryology, and growth of children at the Faculty of Medicine, Alexandria University, Egypt. He studied and worked at the Department of Growth and Development, Institute of Child Health, University of London, under the immortal J. M. Tanner, the greatest pioneer of Human Growth of his time. The department is the leading center for research on human growth and development and attracting academics from around the world. For thirty-five distinguished years, Dr. Attallah has devoted his life in teaching, lecturing, and conducting research on growth of children and its applicability in child health and other fields in UK, Egypt, Saudi Arabia, and Sudan. He was also a consultant to the USAID projects to improve maternal child health in Egypt and at Dahran Air Base Hospital. Dr. Attallah was the author of several published scientific papers and three books. He is a contributor to the great book Worldwide variation in human growth published by Cambridge University Press. He has been awarded a certificate of merit from the Sudanese Military High Command and Saudi Medical Forces.