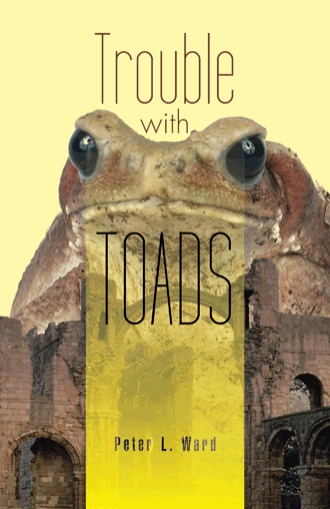 Denbridgehurst - a small, rural village set amongst the rolling hills and wooded slopes. The 14th century church is dedicated to the martyr St Wayne the Celibate, a Saxon saint of little renown. Unpleasant people reside in the village, their unpleasantness measured by social status and accent. Wealth and heritage is everything and results in a community strictly divided into strata of social acceptability. Four notably nasty, church-going Christian women rule the roost. These elderly bigots take advantage of the new decree of the recently elected right wing British Government. This is that each rural community must now be responsible for its own affairs and expect no national assistance. A political vacuum opens up into which step the power women keen to exert their influence over the 'proles' that exist beneath them. At the same time, Russian oligarch investors cast their greedy eyes on the region, known to house rich underground oil and gas reserves easily extracted by the modern 'fracking' process. This is environmentally lethal but the oligarchs are skilled in persuading the self-appointed new council that mutual advantages lie ahead - a new golf course and hotel complex. And a promise to liaise with the women leaders to lead the fight against the government's intent to push a new motorway through the village, demolishing the historic church. Working from an underground bunker, not unlike that of a former German Fuhrer of the mid-20th century, the four village leaders plot to outwit the national government. Put of their strategy is to have the area scoured for rare and endangered species of wildlife. Even to the point of importing species should the indigenous varieties prove insufficient. Orang-utans are seen sleeping in high trees and a rhinoceros escapes creating mayhem in the locale. It's all part of the Big Plot but, unfortunately for the bossy women who now make the villagers' lives Hell, it is the Russians who are actually in charge of the mega-operation. The apparent fracking process for oil and gas is no more than a front to build a secret, underground Hadron Collider about which the women have no knowledge. The story accelerates in a gathering crescendo of ever more ludicrous events. This is largely due to the homeopathic obsession of one of the key protagonists. Elizabeth Parker is a curious member of the awful foursome, particularly considering her humble origins in industrial northern England. First, she upsets the conservation organisations surveying the village when they discover her shooting animals, at night ,from her bedroom window. Her target is local cats but, inadvertently, she takes out two rare and endangered Natterjack toads. This causes a furore and she is drummed out of the ruling Bunker group. Married to a husband in a poisoness marriage she returns to her old hobby of homeopathy. The poor man is dragooned into helping her prepare her various dilutions and preparations but he plays a terrible trick upon her. Within days, Elizabeth Parker has grown facial hair and on the backs of her hands. Her plight is remedied by her remaining friend who takes her to the altar of the old church where a statue of the Virgin is said to have been seen weeping from her eyes. In fact, this is a hoax set up by the young curate and a couple of electrician friends who plan to produce a 'miraculous' happening in the church. The 'Weeping Madonna' soon gains national publicity as those who kneel before her witness the tears. Elizabeth is indeed cured miraculously (never part of their plan) and her husband throws his secret hair-growth homeopathic recipe into the school pond where a rare colony of Natterjack toads thrive. in little time, Denbridgehurst is invaded by toad monsters scaring the villagers and going off with pet cats and dogs. The place is in uproar. Worse is to come. In a final scene of Faustian drama the church crumbles into dust as the secret Hadron Collider in the guise of mineral exploration disrupts the foundations. A furious village turns on the small group of power women and pursue them to the Bunker. It is there that the last, awful scene is enacted as monster toads have gained access to the secret escape route from the underground shelter. They corner the individuals who have brought such approbrium upon themselves. The rest must be left to the imagination.

Bigotry, selfishness, and lust for position and power thrive in a sleepy twenty-first-century rural English village. The quietude of the surrounding rolling hills and woodlands is not all it seems. Self-appointed busybodies from the upper ranks of the community take it upon themselves to direct the lives of others. But they are amateurs at the game. At the same time, foreign investors move in to exploit mineral wealth potential that lies buried not too deeply in the strata beneath the quaint cottages and old church. The whole area of East Sussex is ripe for gas development. Local democracy is abolished on a “go it alone” whim of the new right-wing British government. Each community must now earn its own keep. The village of Denbridgehurst swiftly evolves into a place of fear and intimidation. Four elderly power women take over and connive with Russian oligarchs keen to exploit the riches underground. Meanwhile, the national government threatens to run a new motorway past the village, taking out the fourteenth-century church. Enormous opposition is formed and led by the women. Conservation organizations are called in to scour the area for rare or endangered species. These could hold up the planners. The Russians have other ideas. Their true intent is to build a hidden Hadron Collider beneath the village.

Peter L. Ward is a former chief producer in BBC Education who happens to live in a sleepy Sussex village. His trilogy for children (Trafford Books) Freedom of the Waves has been awarded glowing comments from top critics from The American Review of Books, ForeWord Reviews, Kirkus Reviews, and BlueInk Reviews. Ward’s first book, The Adventures of Charles Darwin (Cambridge University Press) has been translated and published in seven languages.