Marry yourself before you slip away 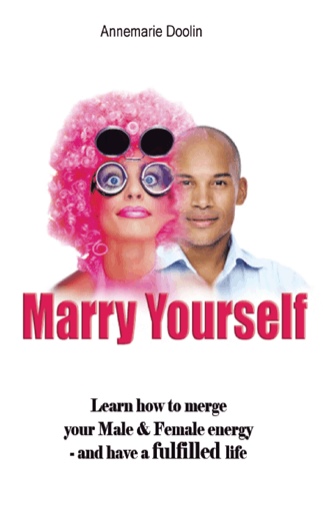 You came from a man and a woman. Even though I received what I share with you in this book as a vision, I was always looking for information that would validate it more physically. About seven years ago, a series of events drew me to the Bible. As I opened my mind to the Bible I was amazed to find truths that had been detailed there all along. The Bible unveiled its cover as the most profound self-help tool ever produced. A point in the making is my irritation at something Jesus constantly says. I often felt irritated that every time Jesus spoke about a person, regardless of a man or woman, he always referred to them as a 'son of God'. As a woman I felt very invalidated. Though irritated, wisdom prompted me to reconsider that God made woman and he loves every one of his children so somewhere there was something I was missing. In time, I came to understand how vital God valued the female. His creation started with plants, progressed to animals and then to male as He created Adam. God Himself concluded this wasn't enough and went on to create the female, Eve. It was then that He concluded His Creation was complete! I looked at the process in which Adam and Eve were created and this is what it says in Genesis 2:21-23: "And the Lord God caused a deep sleep to fall upon Adam; and while he slept, He took one of his ribs or a part of his side and closed up the place with flesh. And the rib or part of his side which the Lord God had taken from the man, He built up and made into a woman and He brought her to the man. Then Adam said, this creature is now bone of my bones and flesh of my flesh; she shall be called Woman, because she was taken out of a man." As woman came out of man and is part of man (and they now produce children) it is evident that every child contains male and female. Regardless of the fact that we manifest physically in one gender or the other, we are still both energies. As God created it that way, it must be for a very important reason. God never created anything without it being necessary to the success of His plan. If we look back in Genesis 18, God says, "It is not good (sufficient, satisfactory) that the man should be alone; I will make him a helper (suitable, adapted, complementary) for him." God (our Creator) makes it clear that if operating under male energy only we will start to feel alone and that the female in us 'suits' the male side of us and is a complement and a helper. That said, we can see that the female will not only help us to bring our power (which you will learn is male) into force... the female is also a complement. The dictionary defines a complement as "something that completes or makes perfect". The true dynamic of how we prosper starts to reveal itself. So why do we manifest as only one gender? Earth is a physical reality. In order for us to fully understand the science and nature of how everything works together, everything has a specific function which can be seen. We can see the behaviour of everything around us as a physical metaphor showing us the pattern of how things thrive, evolve and change. Our instincts as humans drive us to create things which mirror how we have been designed to experience things. Our home is a perfect example. We instinctively start to separate rooms for specific experiences because our mind works that way. Sleeping, eating and releasing waste are separate functions within our body and therefore the physical world naturally dictates that we separate them. Hence we have a bathroom for relieving waste and cleansing, a kitchen for preparing nourishment, a sitting room for centering ourselves and relaxing, etc. The same can be said for man and woman. God wanted to help us understand the unique qualities of each. Having us born as one gender or the other enables us to understand them more literally and in detail. You have probably observed that it is easier to see something or validate it when it is happening to someone else or in essence outside of yourself; primarily because we are devoid of the emotional attachment which can cause resistance. The separating of the male and female is designed accordingly, to enable us to see the nature of our characteristics and help us relate to them more effectively. As we operate under the law of attraction we attract to us a precise reflection of the energies within us so we can see the relationship being played out; men and women play out the role operating within us. The intensification of one gender or the other enables us to see the attributes in a focused, more clear way. You don't have to have lived long to observe the diversity between men and women. If you are in a relationship with your other gender, you have probably cried out in desperation wondering why you are so different. However, it is essentially our misunderstanding of the other gender and how we are to interact with them that it is leading to so much pain and frustration. The best way to simplify the power and the purpose of each and why it is there is to use a simple analogy of life as a journey.

Imagine if you could wake up each day confident that your decisions were going to create something great especially in every relationship. Imagine that you didn’t have to keep doubting yourself or thinking you’re missing out because of something you should be knowing, somebody else you should be, or other things you should be doing. Imagine getting out of bed feeling in control even though the day didn’t go as planned. Can you imagine the relief? You always knew something was wrong, didn’t you? This book activates a series of lightbulb moments as the dots begin to join up and the frustrating mess of situations now unravels with an exciting new confidence about yourself and your unique way to happiness. This book hands you a remarkable, mind-blowing, eye-opening revelation about men and women in your life, what they reveal to you about yourself, and how they are key to fulfilling your dreams and will have you falling completely in love with yourself. Be fascinated by who you are and discover your unique way to happiness. Discover a very selfish, ingenious way to speak to others and start an avalanche of favour rolling in your direction!

Annemarie Doolin is an author and self-discovery facilitator. Her books turn your perception of your world upside down. Visions at a young age revealed how we try to provide solutions for the wrong problem, causing an insatiable ache for fulfillment that can lead to divorce, financial struggle, and ill-health.