Curse of the Putrid Pit 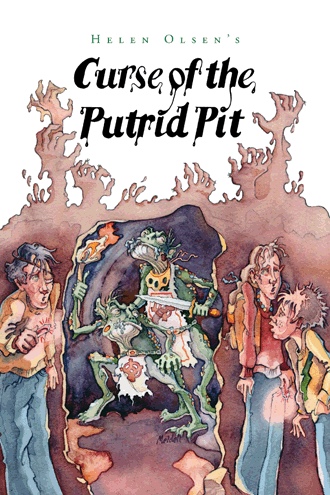 Pauly Parker and his dragon shouldn’t have run away.

According to his parents, he’d always been such a good boy. They never suspected he would get involved in anything mysterious or vanish without a trace. But then again, it should have been expected in the town of Curious Corners, where strange things often happened. All sorts of people had begun to disappear for no apparent reason.

Pauly, thinking he could strike out on his own after finally making it to his ninth birthday, should have paid attention to the local newspaper, The Daily Tattler, which always listed the missing persons report on the front page. If he had, he might have noticed the story about the mayor’s wife who disappeared one fine spring morning. She’d hiked up the hillside to pick peacock flowers, and the next thing Mayor Flatbelly knew, his apple-cheeked wife of twenty years turned up missing. Nosey neighbors accused her of running off Manley Stanley, the dragon catcher from Dragon Bite County, since he, too had vanished.

Pauly didn’t have an opinion because he didn’t pay attention to the warnings. However, his older sister, Aurie, tried many times to alert him. “Don’t leave the neighborhood without me,” she’d say. “And don’t go near Blue Hill. Mother says weird things happen up there. You’re too young to be off by yourself, anyway.”

“She’s just a know-it-all,” Pauly said to himself. “I’m big enough to have my own dragon, and my teacher says I can figure out answers before she even asks the questions. If I take Jaxor, I can go anywhere I want.”

He petted the scaly head of his miniature dragon that let out a puff of steam through two small holes in his snout. The dragon’s red-greenish wings, which were folded neatly on his back, abruptly fanned out over the boy’s finely spun blonde hair and smooth face.

Sun shading seemed to be the only reason for Jaxor to have wings because miniature dragons can’t fly. No one seems to know why. Maybe they just forgot how. In fact, they shouldn’t be called dragons at all because they were no good at terrorizing small towns in the mountains. But if you could catch one and put it on a leash, it did make a pretty good pet. Pauly’s father purchased Jaxor to protect his boy if need be, and this was their first trip out alone.

“Remember to take Jaxor if you go anywhere,” his father had said. “He comes from the fiercest breed of watch dragons around, and he’ll protect you.”

Jaxor’s back stood as high as the boy did, which wasn’t very tall considering normal dragon height. His neck was as long as a hockey stick and thick as five baseball bats. Pauly tied a leather leash around him because the animal loved to run off and hide in dark places like behind wood piles and such. His favorite hiding place lay inside the black recesses of a nearby cave. Once, Pauly even found him snoring peacefully in the back of his clothes closet.

Holding Jaxor’s leash in his right fist and a hiking stick in the other, Pauly clambered up Blue Hill. He’d already come a long way up through the mists of Creepy Gulch. The gulch snaked up the hillside, connecting Blue Hill to the town. Having a dragon around proved handy in the gulch, because it scared away all the mudslingers and wood sprites tormenting anyone crazy enough to enter. But, the gulch was the only way up to Blue Hill. In spite of possible trouble, Pauly’s courage and Jaxor’s reputation as a guard dragon kept them safe when they entered into the mudslinger’s domain. Other folks going through Creepy Gulch weren’t so lucky. Most people steered clear.

The boy could hike pretty well. He learned the skill early like most of the townspeople in Curious Corners. There were a few who didn’t like hiking, and as a result, they didn’t get around much.

Pauly had paid attention to his training, so getting past boulders, wild vegetation, and scary gullies posed no problem. The only equipment needed to get around were sturdy boots with spiked bottoms and a strong walking staff. Pauly prepared himself with both before he left home. He also carried a canteen of water and a pack full of his favorite candy, “Sweets” chocolate covered cinnamon bears.

Stopping to rest for a moment, Pauly took a sip from his canteen then offered some to Jaxor. After Jaxor slugged down a few big gulps, the boy put his cheek against the dragon’s neck. “Aurie doesn’t know what she’s talking about. This is a great place, isn’t it, Jaxor? Nothing bad could happen up here.”

Jaxor lowered his head to the ground and lifted up a large stone with his snout. His forked-tongue pulled out some slugs and skittering insects living in the cool, damp soil underneath.

After a few minutes rest, the boy and his dragon continued their trek, climbing a winding trail to the top of the hill. Mossy stones and thorny weeds fought for space along the trail, while crickety-lickets hopped across their path spewing out brown spit. The strange thing was, the dirt on the trail got bluer and bluer the higher they climbed. Pauly had no idea why.

Moving upward a half-mile further, they reached the crown of Blue Hill.

Standing on top of the slope, Pauly caught sight of three jagged mountain ranges encircling rolling hills. Now, they didn’t really roll, they just looked bumpy like a roller coaster. Babbling brooks threaded their way down toward the town.

Curious Corners looked like any other sleepy town cradled in a valley under giant mountains. From his position on the hill, Pauly saw the mists hiding Creepy Gulch. His chest swelled up to think that he had escaped trouble from that scary place. His eyes followed Creepy Gulch down to the outskirts of town where he could barely see his elementary school in the limbs of a gigantic tree. Past the school, houses began to dot the landscape. Some rooftops slanted, others bulged like bubbles.

“All those houses look like eggs in a nest,” he said to Jaxor who tried to nip at a sting fly dive bombing his backside.

Curious Corners looked small and helpless against the mountainous backdrop. Off to the west, Pauly could see a broad expanse of sand called the Western Desert. He’d heard there was a war going on out there against giant sand serpents and was glad to be far away.

The young boy took a deep breath of blue sky and felt he could conquer the world. Too bad he didn’t notice the rickety sign posted just over the summit, hidden behind a patch of tall grass. Someone had scrawled a warning to anyone passing through:

“If you’re foolish,
You can enter in. But if you’re smart,
You better steer clear. Only the one
With the Light of Truth, Can break the curse,
Of the poor souls here.”

Suddenly, a strange sucking and popping noise got the boy’s attention. It was soft, but unmistakable. Although it didn’t grow louder, it didn’t go away. The noise seemed to come from up ahead on the trail.

Pauly turned to his pet dragon now following behind in his footsteps. “You hear something, Jaxor?” the boy asked while scratching his own head. “It sounds kinda like boiling pudding.”

Jaxor turned his head from side to side like a dog casting about for a scent. Pauly looked forward again toward the eerie sound and felt his stomach twist. He tightened his grip on the walking stick.

The dragon snorted and eyed the trail with alarm. Something evil lay in wait for them.

Swinging around and pulling Jaxor forward, Pauly followed the noise past a rocky outcropping surrounded by some withered sticker bushes. Moving past the bend, a smell as rotten as a pile of slug-slinkers ran up the boy’s nostrils. He came upon some huge boulders standing like sentinels shoulder to shoulder, almost as if they guarded something.

Pauly and Jaxor helped each other up onto the top of the boulders and peered over. Shocked at what he saw, the boy fell off and tumbled onto the dirty sand and rocks on the opposite side. 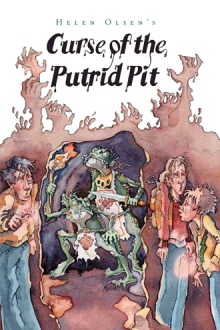 Junior's misery begins after he tells the boys in his new scout troop a lie about his camping skills. But what starts out as a normal scout trip turns into a hair-raising adventure as the group faces wild animals, and perhaps even worse, girls who like to play pranks.

And Junior's adventure is only half the story. As the boys hike, Wild Bill, their scout leader, tells the tale of a storytelling girl named Fannie Fibber and the strange disappearances going on in her town. Junior's own troubles fade into the background as he learns that not only is Fannie forced to wear the frightening Necklace of Honor, but she must also risk a meeting with Swarthog, the goblin king, to rescue the stolen Light of Truth in order to save her fellow townspeople from the Curse of the Putrid Pit.

Come with Fannie Fibber as she learns to be brave and honest at all costs, and follow Junior through his own struggle to be accepted, as the story of Fannie Fibber teaches him how to walk in the light.

Fannie didn't want to be the goblin king's next barbecue. But things didn't look so good. Her hands and feet were tied with leather straps, and she was perched on top of the slab of rock he used for a throne as the whole goblin nation danced around her and cried:

"Toast the human crisp and black,
'til she gives the truth light back!"

Their screams echoed in the cathedral-like cavern, the likes of which Fannie had never seen before. Hundreds of goblins with torches and sweaty bodies twisted and jerked around her. Scared, she had to think fast...

Helen Olsen (Conwell) is a retired special education/social studies teacher. She is an accomplished watercolor artist and has displayed her art at "Fantasy Mountain Art" on Facebook as well as galleries in California, Washington, and Utah. She lives with her husband in the Oachita National Forest in Arkansas where they enjoy the wildlife and wonderful people who live there. She has written a memoir of victory over child abuse called, Cracks in the Sidewalk: Secrets of Abuse from a Child's Eye."