The Real True Stories of the Fairy Tales

As Told to Regan by the Old Steam Engine 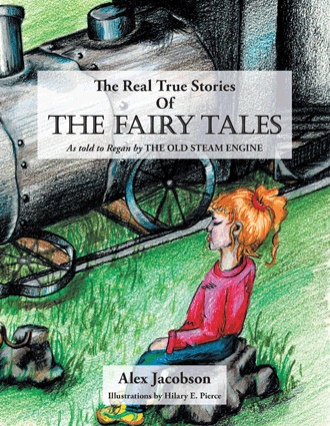 THE LITTLE ENGINE THAT COULDN’T AS TOLD TO REGAN BY THE OLD STEAM ENGINE Once upon a time there was a young girl named Regan who lived in the Rocky Mountains. Regan loved going up high into the mountains. There she would walk and talk to herself and to nature. And, sometimes she would think about how nature would talk back to her. And, sometimes she would ask nature questions – and then she would think about how nature would answer. It was just such a day, and she was walking right along side the old Rocky Mountain rail road depot. As she walked she pondered that there were lots of rocks in the Rocky Mountains, and there were lots of mountains on the rocks. So, she asked herself, “Self, why do they call the Rocky Mountains the Rocky Mountains?” It seemed like a simple question, and since no one was around, she sat down on a large boulder near an old and abandoned steam engine, and asked again, out loud, “How did the Rocky Mountains get their name?” Then a voice from somewhere nearby said: “Rocky Mountains is a translation of the word the Cree Indians called the mountains. That word was ‘as-sin-wati,’ which meant ‘mountain of rocks. “This was because from a long distance away the mountains look like a pile of rocks. In 1752 a French explorer named Legardeur St. Pierre referred to them as ‘Montaignes de Roche,’ mountains of rock. “That was half a century before the Lewis and Clark Expedition would even reach this part of America.“ Regan stood up from the boulder. The voice seemed to be from an old man. Perhaps very old. The man was talking to in a calm and soft voice. “Who said that?” she asked. She looked around and saw no one nearby. She could see no one at all. She then thought that a friend of hers was hiding somewhere in the one of the old train engines or perhaps behind a nearby tree. Then, the voice said, “Did I not answer your question to your satisfaction, Regan?” Now Regan knew it had to be someone trying to play a trick on her, because the person knew her name. “COME OUT!” she yelled. “This isn’t funny. Whoever you are, come out where I can see you. And, how do you know so much about the Rocky Mountains?” The voice said, “I’m not hiding. I’m right here.” Regan looked around some more. There was no sigh of anyone. Not a single person. She walked around and around the Old Steam Engine, expecting to see one of her friends from school, or perhaps even her mother or father standing there and laughing. But, there was no one. Regan began to worry. She knew not to talk to strangers, and if no one she knew was around, the speaker could very well be a total stranger. Regan decided it would be best to leave the old rail road yard, and head back home, but just incase it was a stranger, she picked up a good sized rock to hit him with. “Be careful with that rock,” the voice said. Its tone was very gentile, but firm when it added, “I have enough dents already.” Now Regan was angry. She raised the rock to throw at someone, but she was not sure at whom. So, to show her anger at whomever might be watching, she threw the rock at the Old Steam Engine, and watched as it chipped the paint. But, the engine was over 100 years old, and made of strong steel from long ago, so it was not dented it one little bit. “Hey!” cried the voice. “I told you to be careful with that rock. You chipped some of my paint. That paint has bee there for over one hundred years – and, now you have chipped a big chunk of it away. Some day, they will probably melt me down to make some other newer train or car or something. But, for now at least treat me with some dignity. Don’t you know who I am?” Regan was startled. Did the Old Steam Engine actually speak to her? She walked closer and looked under it, over it. Finally she said, “OK. Who ever you are, I can’t figure out where you’re hiding.” “I’m not hiding. I’m right in front of you. I’m the steam engine you are walking all over.” Regan was not frightened, she was just amazed. She was standing in front of a talking steam engine. Carefully, she asked, “Why are you speaking to me?” “I thought you were speaking to me,” said the engine. “You asked a question, and I’m the only one here to answer it.” “Then, what you said about the Rocky Mountains getting its name was true?” “Absolutely, I’ve heard many old miners speak of it. I often heard them tell stories of their adventures in the Rockies. But, I don’t think any of their adventures were ever as amazing as mine.” “Yours?” said Regan. “What adventure would an Old Steam Engine have? “You look so old and rusted. Your paint is pealing and pieces of your metal are bent. You might have carried lots of freight cars, but that is not an adventure. That‘s what steam engines do.” 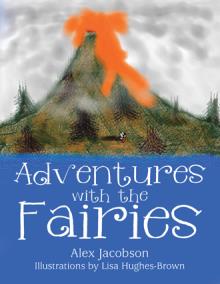 Adventures with the Fairies
Alex Jacobson Illustrated by Lisa Hughes-Brown
$33.99

In this book, The Old Steam Engine, who knows the real stories of what really happened in those fairy tales we all hear, tries to set the record straight. He is, in fact, the real “Little Engine that Couldn’t.” When a little girl named Regan happens upon the old steam engine, he is an abandoned and broken down steam engine. But he begins to speak to her. He tells her that she has heard the wrong stories about what happened to people like “Little Green Riding Hood” and “Snow Purple.” He tells the little girl that Little Green Riding Hood was not helpless and did not need a woodsman to save her. So, too, Snow Purple did not need to marry a prince. The real stories of the fairy tales tell children that real people are the heroes of the stories. The uniqueness of the stories appeals to adults as well as children so that the adults reading the stories will find them fun to read and to discuss with the children.

Alex Jacobson usually goes by Al. While a teenager he had an older cousin with two young children. While visiting them, he would be asked to tell the children bedtime stories. Rather than tell the usual stories, he would embellish them, and try to bring them up to date. Though Alex aspired to become a novelist, and wrote several adult novels, he found that children loved those bedtime stories. It was his mother who always pressured him to write them down. Alex is known to his young fans as “Papa Al.” While a toddler one of his young fans could not say the name right, and it came out “Papa Al.” That name stuck. Al says, “What the heck. Being called ‘Papa Hemmingway’ never hurt his career.” Alex was born in San Francisco, California in 1942. He attended George Washington High School, there, and even wrote a autobiographical book about the experience. A third generation San Franciscan, Alex was somewhat frightened of earthquakes as a child. But, today says, “I’ve lived through a lot more earthquake predictions than earthquakes.” Alex enlisted during the Cuban Missile Crisis in October of 1962. He spent three uneventful years in the army, but often says he is grateful to the army for an all-expense paid trip to Europe. After the army, he returned to college and received a Bachelor of Science degree. At present, he lives in Commerce City, Colorado, a suburb of Denver. He says he is “Semi-Retired,” because he spends much time at the word processor coming up with new stories. He is always open to story requests from any youngsters. Lots of the stories he has written have been to fill the request of some young boy or girl who wanted something special just for themselves.