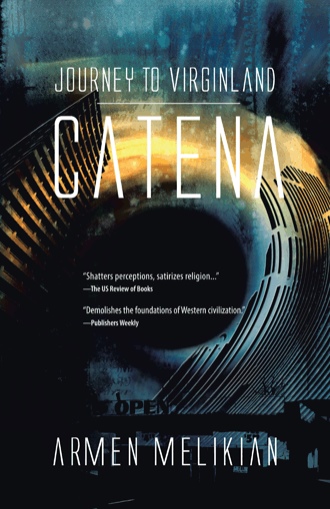 Catena recounts the open-ended odyssey of a modern antihero adrift at sea. Born into the cultural fragmentation of diaspora and a world citizen by default, the protagonist, named simply Dog, roams the globe in a Sisyphean quest for home, unable to claim allegiance to either creed or flag. Erudite, sharp-witted, and street-smart, Dog marshals the survivor’s tenacity in his attempt to distill a legacy of victimization into a cogent, dynamic identity marked by the creative impulse and, ultimately, a life-affirming ethos borne of the liberation from the self and the other alike. The first epistle of the Journey to Virginland trilogy, Catena is Dog’s maiden foray into his ancestral country, where women are perennially struck by virginhood, men remain churlishly Neanderthaline, and a resplendent culture is held hostage by the twin hydras of chauvinism and corruption. It is here, in his self-referential heartland, that a disillusioned and ostracized Dog will be propelled into a consummate search for meaning. The ensuing journey unfolds as a fluid, cinematic tapestry of emotion and experience, seemingly rudderless yet tightly interconnected, with the narrative woven together by the protagonist’s biting observations on sex, politics, history, religion, and philosophy. Closely reflecting Dog’s splintered world, which is a consequence of empire in naked brutality marketed as progress, or as the exigencies of civilization, Catena is a conscious subversion of the form and structure of the modern novel. Melikian rejects the very nature of the conventional novel, viewing it as emblematic of the rational structures, cohesiveness, and verticality of centers of power, of the ongoing project of imperialism. What emerges from Catena is the irreverent, often bawdy, and intensely moving tale of a stateless outsider that dispenses linearity in favor of fresh air and a freedom of seeing, which hints, with every turn, at a higher sense of humanism.

Armen Melikian has earned a master’s in international relations from American University in Washington, DC. He has also studied mathematics at Harvard and was admitted by the Mathematical Institute of Oxford University to pursue graduate studies. However, he abandoned both politics and mathematics in favor of literature and dedicated his life to writing. Melikian is the winner of eight national and international book awards in general fiction, literary fiction, visionary fiction, humor, and comedy. He lives in Los Angeles.