Voices In A Midnight Mind 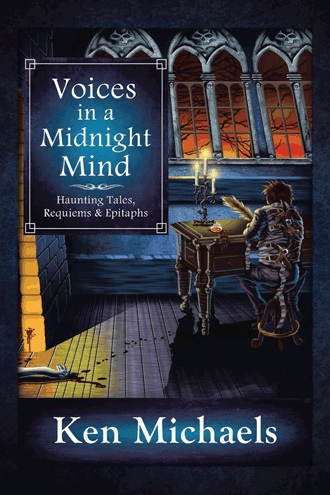 The Dare The house that stands at 1528 Poplar Street was not haunted, though local folklore and rumor betrayed this mere fact. The home itself was located in the middle of Poplar Street in the small Illinois town of Oakdale. Built over a hundred years ago, it was a vision of well-crafted art drawn in the guise of a three-story home. The spacious wraparound porch that curled to the backyard on both sides of the house added to the opulence. Many large windows were placed in the first two floors of the home. Small windows stared blankly from about the third floor, keeping a silent watch of the spruce pine trees that surrounded the perimeter of the side and back yards. The steeped roof gave the house a definitive Victorian style, indicating past grandeur to its era and initial owners. A wrought-iron fence surrounded the property on which it stood. A creaky gate hung at the entrance to the front yard, where it would clang noisily on the metal latch as it swung in the transparent clutches of a nighttime breeze. Beyond the gate was a stone-covered walkway that led to the stairs for the front porch. The house had passed ownership five times in its history. The last owners of the house were Thomas and Joyce Bennett, who bought it in 1960. Childless, they owned the house for thirty years. In 1989, Joyce was diagnosed with cancer and succumbed to it one year later at the age of sixty-six. A few weeks after her death, according to witnesses, Thomas, likely distraught over his wife’s death, shuffled drunkenly out on the front porch one night, twelve-gauge shotgun in hand, and started firing it into the air, yelling obscenities to his neighbors. Sheriff’s deputies were called, and after a brief but successful negotiation for him to surrender his weapon, he was hauled away to the local jail. A few days after being incarcerated there, though, he had died of a heart attack. This small blip in the home’s history had given it the undeserved reputation of being haunted. Almost immediately after Mr. Bennett was taken away, rumors started flying that the spirit of his dead wife haunted the house and that it caused him to go crazy. Further gossip indicated that the couple had a son who was hidden in the attic, accidentally killed by the father, and buried on the property. These types of rumors made it difficult to sell the home, and for the last ten years, it remained empty. And for each year that passed by, wild imaginations and fabricated stories by local residents added new layers to the house’s history like dust upon its creaky wooden floorboards. So the house stood proudly in its inanimate state, unaware and placid to the stormy gossip that surged through the town’s veins about its new reputation as a haunted house. But it was immune, as most houses are, to unearthly inhabitants since no amount of rumor could make a ghost walk the empty halls and rooms. Gossip could not cause a misty apparition to glide silently up the carpeted stairway that led to the second floor. Innuendo could not make phantom blood appear. Folklore could not slam doors, could not perpetuate concealed maniacal laughter from a disembodied spirit, nor could it rattle chains. And so, for all the myth, one thing was certain. It did not have a ghost. **** Halloween ended too early from the perspectives of Paul Bolden and Joey Armstrong, two thirteen-year-old boys who lived in this quaint town. The nighttime curfew of eight-thirty for the trick-or-treaters had long passed, thus making the rest of this Friday night an unbearably boring burden on their mischievous psyche. Their brains, wide awake in their respective Halloween candy-induced highs, betrayed their tired bodies and feet. They wanted fun, and they wanted it now. “What a waste. It’s Friday. They should at least be able to let us trick-or-treat later than this,” Joey said, disgusted. Paul nodded his head. “I agree. It’s a perfect Halloween night.”

Voices in a Midnight Mind is a compilation of horror stories that will run a cold skeletal finger down your spine in the dim reading light of your otherwise cozy room. The descriptive, often dark, narratives between these book covers will escort your thoughts with a sure hand and unsound mind, from the playful beginnings of two boys in “The Dare” through the unique solution to the world’s energy sources in “Oilganic” to the poignant redemption of a cold lonely man in “Batting Cleanup.” Each haunting tale welcomes you like a creaky door to a dark house and bids you farewell with the gentle caress of a shovel on your grave. And you will be left wondering, and wandering, in the dark room of your imagination . . . your own midnight mind.

Ken Michaels’s life-long passion has been carefully weaving tales of haunts, hauntings, and the haunted—always attempting to snag, if not tear, the thin fabric between all three. Yet though he has been writing ghost stories since his youth, the chilling narratives contained within Voices in a Midnight Mind are his first published works in the genre. His previously published work was Tales from a Poet, a collective of his acclaimed poetry. A free-lance paranormal investigator with an electronic engineering degree, he works to bridge the gap between modern electrical principles and the age-old question on the existence of legitimate paranormal activity. Ken lives in Florida with Sherri and his two cats, Mosey and Wrigley.