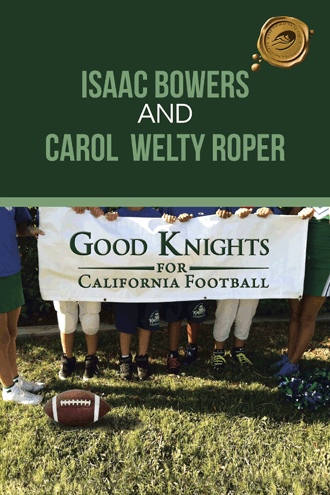 Spring showers made the field soggy and slippery on Saturday. Despite the heavy clouds promising more rain, the volunteers set up tables filled with forms for physicals, schedules for practice and jersey sizes. One table had snacks and special water with its own plastic bottle that displayed the green and white logo and the words, Good Knights! Each coach had his own green jacket with his name printed over the symbol of a medieval knight charging on a massive steed. All the coaches and their assistants wore shiny new whistles attached to a green and white strap that hung around their necks. Clipboards in hand, each was ready to mold these little lumps of clay into running, tackling, fighting machines that played football and fell asleep with various learned plays running through their dreams at night. The local pizza place had extra pizzas made up, ready to bake off after the tryouts were over. Every Laundromat, daycare, beauty shop, gas station, and restaurant had the Knight's football schedule posted in the window for all the public to see. The local newspaper sports reporter showed up, as well as the mobile radio station, KSEL FM 99.1 playing music for the parent’s pleasure rather than for those kids playing ball. The ice cream truck quieted its mobile jingle and parked on the corner so the families with younger siblings could buy some treats. A couple of police cars showed up and the officers stood around looking official. Several families brought blankets and lawn chairs with ice chests and buckets of chicken, ready to spend the night. The local park quickly grew with young boys standing around waiting to perform all tasks the coaches had for them. Clumps of girls stood around looking for the lady in charge of tryouts and signing up girls for cheerleading. A powder blue cosmetic company car parked in the handicapped zone and a woman in a green and white jumpsuit accompanied by a tall, tanned, blond man, carried stacks of catalogs and brochures to the hot pink table next to the concession tent. Jake was dropped off near the registration table while his parents and younger brother parked the minivan. They hurried across the street to stake out a place to sit and watch. Jake had all his important papers in his pocket and held a bottle of cold sport's water. Leon rode his bike and chained it to a tree out of sight and away from the activities. He wore his big brother's hand-me-down running shoes with toilet paper stuffed in the toes to help the shoes fit better. Leon walked over to the registration table and stood in line behind Jake. Jake greeted the boy he had only seen at school. "Hey, how's it goin'? Of all the days for it to rain, it sure picked a lousy day." Leon didn't look up at Jake while he spoke. His eyes watched his borrowed shoes kick at the wet sod. “Man, I don't care if it was snowing purple Twinkies I came to make the team. I guess you are here for the same reason.’ "Got that right, this is my dream. Our whole family loves football. I was even named after a famous football player." He lied. "Oh, by the way, my name is Jake. What's yours?" "Hi, my name is Leon. I have no idea who I was named after." He finally looked up at Jake and gave a lop-sided smile. You must be named after Jake the snake. Jake felt less nervous and returned the smile. They both turned their attention to a group of girls who had arrived to try-out for cheerleading.

"Whenever the team wins, everyone wins and whenever the team loses, we do so as a team but we play giving 100% until the game is over." Readers who are not into sports need not worry, this title focuses more on the off-field drama and personal lives of the players, parents, and coaches more than it does on-field performance of the Knight's team. Great for fans of the sport, parents, children, and readers who enjoy pre-adolescent drama fiction, this title is a fast, fun, and satisfying read. —The US Review of Books Good Knights of California is a story about teamwork on and off the playing field. In order for each of us to reach our life goals, it is best to have a teamwork attitude. This attitude is shared by Brady, Leon, Jake, Martin, and Lisa Marie. What they have in common is after school football, with love of the game and a desire to win. The story reveals what motivates these characters to reach their goals by working as a team. Helping others win in life is the go, fight, win of this story and the characters truly earn the name “Good Knights.” Good Knights of California was told to me chapter by chapter after Isaac came home from school. A natural athlete, Isaac Bowers excels in any sport he plays. Football is his passion. This story is fiction based on his experiences playing football. The story is Isaac’s and I am Carol Welty Roper, the co-author. I worked to make his story come alive on paper.

Carol Welty Roper is Isaac Bowers’ grandmother. You can learn more about her writings and art on her blog: www.timelessinktales.com.