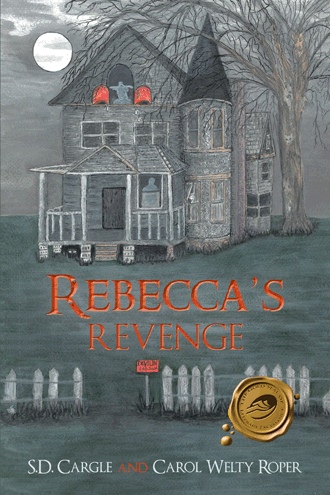 Rebecca's parents were worried sick. Her mother asked her brother, Ben, the same question again that he had just answered moments earlier. "Ben, where is your sister?" "Mom, I just told you. She ran ahead of my friends and me. I haven't seen her since." "Where would she have gone? Look at the clock. It is after mid-night. She should have been home hours ago." Ben watched his dad stare at the phone, expecting it to ring. His mom paced nervously. She hurried to the window in response to a noise outside. The full moon lit up the neighborhood but revealed nothing more than a quiet lonely night. She looked down the street hoping the illumination would show Rebecca her pathway back home. This was all crazy. Rebecca never stayed out this late. Even on the weekends she was in bed fast asleep by this hour. Finally Ben's dad picked up the phone and dialed the police to report Rebecca as a missing person. This was a nightmare. Ben couldn't stand to hear his dad on the phone with the police or see his mom crying. He felt so helpless, so he raced to his bedroom and grabbed his baseball bat. In frustration he began swinging the bat, demolishing his favorite model cars and everything else he could hit. "Stupid, stupid, stupid!" Tears of fear were streaming down his cheeks. "Where are you, Beckie?" He was yelling at the top of his lungs. "Duh, Ben, I can hear you!" Ben stopped his wailing and looked around. " Rebecca? Beckie? Is that you? Where are you?" "Look up, Benny boy, I'm looking right at you. Can't you see me?" Ben strained his tear filled eyes as he surveyed the ceiling. He spotted a figure that was beginning to materialize like a cluster of lightning bugs coming together in the shape of his sister. "Beckie?" His voice was shaky as the reality sunk into his brain that it was Rebecca's ghost he was talking with and seeing near the ceiling of his bedroom. "Ben, calm down. I'm dead, but I'm not gone. I can tell you where my body is and who killed me. I need your help. That ol' lady in the scary house is a witch. You have to help me get my revenge. Stop crying now, we don't have time for it."

This is a creepy little adventure, combined with horror and humor that's perfect for the upcoming Halloween season. The themes of good and evil, revenge, family, and faith are all handled in a sophisticated way. It's a novel that can be enjoyed by teens and adults alike, making for a good old fashioned campfire story. —The US Review of Books Rebecca’s Revenge is a scary and weird look at good overcoming evil. Halloween night, Rebecca stumbles onto something mysterious that has been plaguing Diablo, her hometown. Rebecca’s family and friends get involved and help her free lost souls. This is a story full of twists and turns, with surprises to keep the adrenaline pumping. Rebecca’s Revenge is the brain child of S.D. Cargle. With a flair for scary drama, S.D. Cargle sat with me and told me this hair rising tale. The story is hers and I, Carol Welty Roper, the co-author, worked with her to make her thoughts, characters, and scenes come alive on paper. It is best to read this story on a stormy dark night.

Carol Welty Roper is a friend of S.D. Cargle. You can learn more about her writing and art on her blog: www.timelessinktales.com