17 Little Pieces to A Puzzle 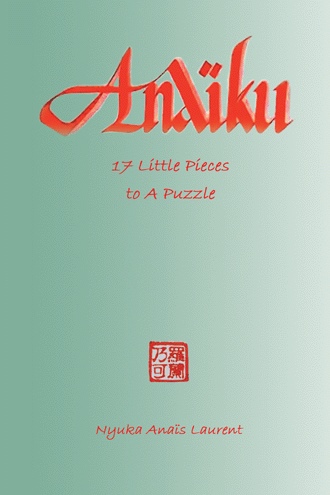 Anaïku is a series of haiku poems in an original format of four lines instead of three, but still with seventeen syllables per poem. The book is in three parts: Part I, Before We Were Two, when two people search for their perfect mate; Part II, Tying Knots in Macramour, when a couple is formed and a family founded; and Part III, Frayed Ends, when the idyll comes apart. The second part has, in fact, two possible scenarios. The book was written over several years, and the format has come about on its own, as a diamond, the symbol of eternity or perpetual continuity, since couples join and come apart on a regular basis and their offspring often take the brunt of painful separations. The center of each set of two facing pages has a black-and-white India ink serendipity work, which can be interpreted by the reader for one or more poems on the two pages.

Nyuka Anaïs Laurent, née Harriette Hayes Lawrence, a born New Englander, was brought up in Massachusetts. She began writing poetry when only 10 and has continued ever since. She went to the MacDuffie School for Girls and Elmira College, where she was named to Who’s Who among Students. At Elmira, where she completed her undergraduate studies, she majored in English and French and minored in Art, creating the basis for her future choices of work in diverse fields. After her Junior Year Abroad studies in Paris, France, she transferred to the University of Paris to complete 3 degrees: a D.U.E.L., Licence and a teaching Master’s degree in Anglo-American studies at the Faculty of Nanterre, part of the University of Paris. She immediately began working in the Continuing Education department of the Faculty of Censier, in the heart of Paris, teaching and developing English as a Second Language (ESL) programs specifically tailored to the needs of public and private entities under the auspices of the University. She married her “handsome Parisian” and bore him 3 children, a daughter and two sons, during this period. She later worked as an ESL trainer in two nuclear power plants in Normandy, preparing management and white collar employees for WANO and OSART visits, as well as cultural differences for in situ positions abroad; in China where EDF (Electricitéde France) collaborated. In Paris, her after-hour leisure time was spent in workshops with Rome Prize winner artists; the results became the foundation for her later works in paint, collage, sculpture and other materials. She also attended Art history courses at the Louvre. During her long teaching career in public and private corporate programs she never stopped writing or creating art works. Her writing, primarily haïku and some short stories, often illustrated, took place after returning to the United States in the late ’70s to raise her 3 children. Ekphrasis, the combination of the two forms of art, has become her trademark and the basis for most of her present works, each one inspiring the other. She is presently the owner-director of the Galerie Quint-Essences in Neuchâtel, Switzerland, where she launches up-and-coming artists and exhibits the works of a fair number of international artists, as well. Artists from over 30 countries have exhibited their works there since 2005. It is in this same intimate 2-room setting that she also coaches individuals and teams using art as the primary systemic tool to deal with unspoken communication difficulties. Her motto is « We change the world through art » and she frequently organizes exhibitions to create awareness of ecological problems or natural disasters, as well as the social and emotional challenges faced by today’s artists. Her dedication and caring nature are visible in the activities of the non-profit organization Art à la cARTe she started years ago. Her art, educational innovations, writing and coaching have received numerous awards and recognition, including membership in Who’s Who Worldwide, Who’s Who among Professionals, Woman of the year in Madison Who’s Who, Who’s Who in Poetry and the International Women’s Leadership Association. When asked why she spends so much time working for others she smiles and says “That’s what we’re here for, to love and care for our fellow humans, no?” © Nyuka Anaïs Laurent, May 2017