A CATALOGUE OF DETAILS ON PRE-CONTRACT SCHEDULES 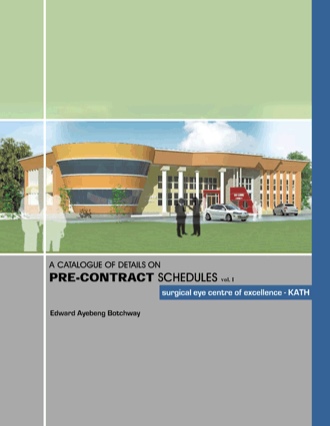 Layout and Form The genius-loci very much influenced the design. Inspiration was drawn from the shape of the site, issues of orientation and topography formed the basis for the new layout and form of the new eye centre. The shape of the site dictated that the rectangular form, whiles the spiral ramp around the A&E administrative wing adjacent the site inherently demanded the integration of a curvilinear form. The challenge was to create a building that was unique in itself but again strongly identifies with the surrounding architecture and setting. In other words it was to establish rapport with its immediate environs albeit not compromising originality. Eventually, a form was evolved after a rigorous design process which involved much intellection and evaluation taking cognisance of parameters such as the budget and issues of sustainability. The solution was to marry two geometric shapes; a rectangle and a truncated and inverted cone into one harmonious form. A third of the rectangular volume is hollowed out to create a court. The resultant double volume space allows for natural lighting and ventilation throughout the building. A phenomenon that is very much in consonance with the concept of sustainability and energy efficiency in building design. In furtherance of the sustainability agenda the building is orientated north-south with the longest sides across the predominant wind path. 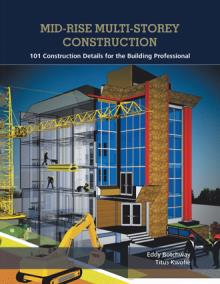 There was the need to expand the eye centre at Komfo Anokye Teaching Hospital (KATH), Kumasi. KATH requested for a design proposal for an eye centre of excellence to adequately cater for the growing needs of patients requiring ophthalmic care. It was to be sighted within KATH’s premises, adjacent to the new Accident and Emergency Centre (A&E). Essentially, the idea was to provide a state-of-the-art facility that would accommodate all functions of the OPD eye clinic as well as provide surgical and in-patient services. While responding to the issues of context, the facility was to employ the most efficient and cost-effective methods of construction. In that regard, the massing and form had to sit harmoniously with its surrounding environment. Our consultancy firm brought on board all its expertise to bear on the realization of the scheme. In terms of the architectural theme, the ball had been set rolling. A terrific precedence had been set in the A&E block, which happens to be on the adjoining site. A parking lot had also been created to separate the two buildings. Such antecedence was inspirational, as it was challenging, in that it evoked some exciting ideas and thoughts with respect to the design solution vis-a-vis a limited budget and restricted site. Eventually, an evocative design was conceived—an intrepid and a very audacious piece of architecture, given the budget, proved very satisfactory to our clients, stakeholders, and target group. This book, which is the first of a series of three volumes of books, tells a visual story of how the noble vision of KATH was born. It is my hope that this book will inspire the reader, through the ideas and details presented, to find the design and construction process enjoyable.

Arc. Edward Ayebeng Botchway is a practicing architect, building and construction consultant, from Ghana. He is a product of one of Ghana’s prestigious universities: Kwame Nkrumah University of Science and Technology (KNUST), Kumasi, where he obtained degrees in BSC (design), PG dip. (arch), and MSC (construction management). He also holds a PG dip. in project management in information technology from Ghana Telecom University College and Coventry University, UK. He has been a full member of the Ghana Institute of Architects since 1994, with over twenty years of professional experience in the building and construction industry. As the CEO of the Projekt David Group, he has been involved in the planning, design, monitoring, evaluation, and supervision of a wide range of educational, health, residential, and industrial projects from inception to completion. He has been a lecturer in the Department of Architecture, KNUST, since 2000 and currently teaches industrial buildings, multi-storey construction, and is a studio master of one of the undergraduate years. He believes that teaching and practice of architecture must first recognize the existence of form as set out in creation, man’s first built environment. The architect must be aware that any practical solution that provides shelter must not deviate from the conceptual forms that govern nature and should strive to create harmony of function with its origin.