A Concise History of Afghanistan in 25 Volumes 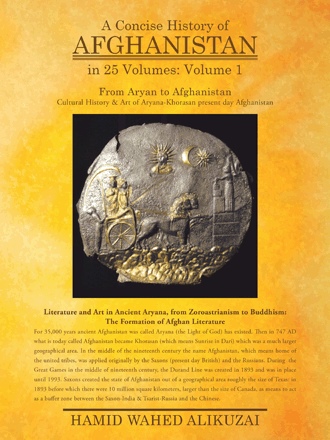 The Saxon Europeans' influence during the Great Games of the mid nineteenth century affected the Afghan language, religion and Territories' size, which previously had extended from India to North Africa at 2.6 million square kilometers. The Great Games continued at any cost evolving into present-day conflicts of 2013. The Great history of Aryana to present day Afghanistan is the history of the Progress of Earliest man and the rise of the Civilization. This manuscript analyzes the history, culture, and art of Aryana to Afghanistan, from 3,500 years ago to October 2013 including Zoroastrians, Sanskrit History (and eight of the twelve tribes). In 964 B.C in Bactria (present day Balkh) the Book of Solomon was written. About Buddhist History: between the two Buddha statues which stand at 51 meters and 53 meters in height, lies the one thousand meter Laying Sleeping Buddha in Bamiyan. created in 500 B.C. Kandahar Christianity History: In 97 A.D in Aryana.. Kufic (present day Arab)- the outbreak of War was in A.D 747 right into 2013 Afghanistan with Islamic history. This manuscript which has never before been published may well answer questions that have been asked in the past thirty-five years. The title is From Aryana to Afghanistan Culture, History, and art of Aryana, and the great ancient history of Vedas, One precious element of the manuscript is a collection of some 400 photographs, and historical Images, 3, 500 years of Women’s History and Hinduism in Aryana, Khorasan, present day Afghanistan¬- Central Asia. The history of Central Asia is ancient. Afghanistan was originally known as Aryana, and is believed by some to be the cradle of civilization. It was here that Solomon was born and Lot and other great prophets. Many people don’t know that Afghanistan is the original home of Buddhism. 1000 B.C Nomadic becomes the dominant way of life on the Aryana Steppes. Zoroastrians has 21 Volume each Book at 345,700 chapters. Home of Buddhism, Kandahar had some of the world’s oldest statues of Buddha before the Taliban destroyed them. The Literature, Physics, Mathematics, science, Medical science, Architecture, Arts, Miniature, Calligraphic, Geometric, Painting, and poems, all those were invented by the Afghan. Destruction and invasion are part of the country’s history, as far back as the days of Genghis khan. Museums, libraries, and art were being burned. Bismarck created the first fundamentalist Muslim school in Khost in the late 1800s as a way to counteract the Saxon (present day British) influence in that country. And in the history of the Great Games, Khorasan, Central Asia (Afghanistan) was caught in the middle of the Cold War, (involving East and West Germany). Between the most powerful three German cousins in Europe, the German Kaiser, the Saxon King, and the Russian Tsars, the conflict was known as The Great Games, in second half of the nineteenth century, I believe the reasons are tangled in thousands of years of history. To fully understand the history must be read. The Afghan nation which won the Cold War suffered a great loss as: “Our people don’t know the names of their parents or great, great grand parents. They don’t know. My mission is to make people understand and help them make the connection.” Hamid W.Alikuzai The Vedas are the oldest known religion of Aryana originating in the ancient capital of Bactria (present day Balkh). The Vedas, Zoroastrians, Buddhists, is literally a Book of knowledge, of Aryana-Khorasan (present day Afghanistan).. The Marxist Revolutionary Movement in Afghanistan and the Red Prince happened. Because Afghanistan was under two puppet kings from 1929 until the Marxist revolution and involved the country in thirty five years of war Afghanistan is completely free and independent in the administration of its domestic and foreign affairs. United States of America is founder of the new Afghanistan today 2011) after 72 years October 1929 until Oct 2001 Background, Born, In Kabul Afghanistan, Educated in a French school-Kabul But I have been living most of my life in Germany, United States of America, and Canada. Hamburg, raised in Germany 1968-88 studying, Engineering and History Los Angeles California United States, Working and studied History and political, 1988-94. Canada from 1994—2013 Vancouver B.C helped me to complete the books is ready. My family has a 2500-year history, 500 B.C Kandahar, My family called first Afghan Loya Jirga in Kandahra during Greek era (to maintain the Greek or throw them out), Zoroastrians, Buddhism, becomes the dominant way of life on the Aryan steppes. The second Loyya Jirga called by my great, great, grand, Uncle Mirwais Baba Hotak in Kandahra in seventeenth century. In 1700 A.D my great, great, grand father’s minister Yar M. Alikuzai in Herat, and Kandahar during European called The Great Games, the stories of brave Women such Malalai Alikuzai during the Battle of Maiwand on July 29, 1879 She was my great, great grand Aunt, my Grand father’s Faquer M. Alikuzai was prominent member of Kandahra society in King’s Army A.D 1867- 1947. In 1919-1929 Your Majesty King Amaunllah Khan called Loya Jirga. My father’s Wahed Alikuzai was a prominent member of Kabul society in King’s army; he died at the hands of communists. 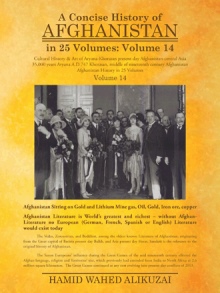 A Concise History of Afghanistan in 25 Volumes
Hamid Wahed Alikuzai
$46.00 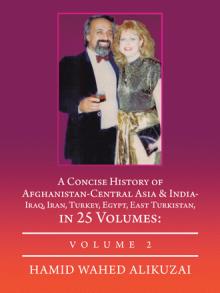 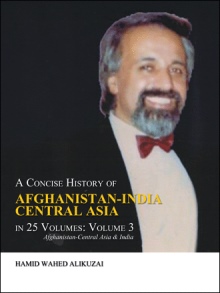 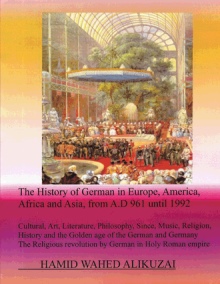 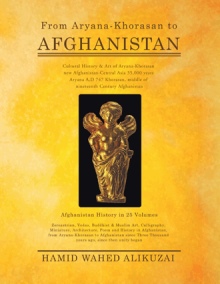 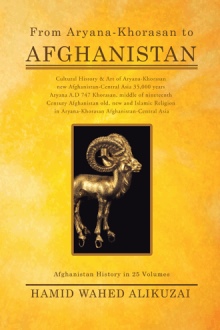 For 35,000 years ancient Afghanistan was called Aryana (the Light of God) has existed. Then in 747 AD what is today called Afghanistan became Khorasan (which means Sunrise in Dari) which was a much larger geographical area. In the middle of the nineteenth century the name Afghanistan, which means home of the united tribes, was applied originally by the Saxons (present day British) and the Russians. During the Great Games in the middle of nineteenth century, the Durand Line was created in 1893 and was in place until 1993. Saxons created the state of Afghanistan out of a geographical area roughly the size of Texas: in 1893 before which there were 10 million square kilometers, larger than the size of Canada, as means to act as a buffer zone between the Saxon-India & Tsarist-Russia and the Chinese.