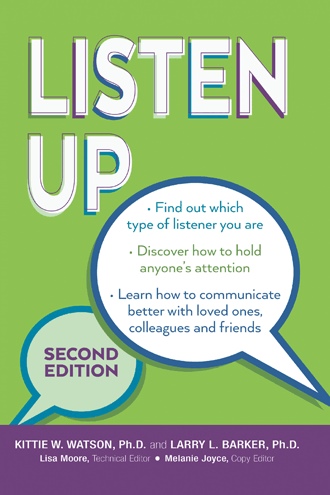 Anyone who wants to be more successful at work or at home will find important, new advice in Listen Up. While there are hundreds of books on how to express ourselves clearly, most of us haven't learned how to listen effectively. The second addition of Listen Up! offers practical information, tips and explains: * Why the listener, not the speaker, controls the conversation * The four basic listener styles - People-, Action-, Content-, and Time-Oriented listeners • How to use the power of listening to gain what you want from any conversation • Why people tune out and how you can hold the attention of listeners • How to avoid misunderstandings and increase productivity by listening with intention * How men and women listen differently, and how to bridge the gap * How to listen effectively to kids, teens, and the elderly * How to improve relationships and increase productivity by changing the way you listen Filled with anecdotes, simple and useful tips, and important research findings, Listen Up will help every reader communicate better at home, on the job, and in every social situation.

Kittie W. Watson, Ph.D. President, Innolect, Kittie has a passion for Growing Leaders and Building Creative, High Integrity Workplaces. An expert in communication, executive coaching, leadership development and cultural transformation, she works with Fortune 500 companies, government agencies, and non-profit leaders throughout the US and abroad. Featured on ABC’s 20/20, American Medical News, Money and Glamour, Kittie is a past President of the International Listening Association and is a top 25 women in communication. Larry L. Barker, Ph.D. Larry facilitated business, educational and government teams for over 35 years. An internationally recognized authority on communication and listening, he has published over 40 books and 100 articles. Featured on the NBC Today Show and ABC’s 20/20, he received numerous honors such as the Golden Quill Award and President of the International Listening Association. A member of the American Psychological Association, he is the Director, Institute for the Study of Intrapersonal Processes, a non-profit publicly supported foundation.