...his enemy came and sowed tares among the wheat 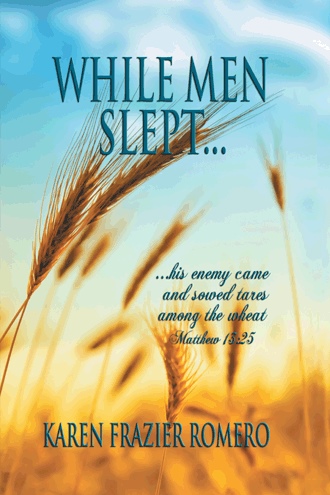 In Matthew 13:24-30, Jesus speaks a parable of the wheat and the tares saying, "The Kingdom of Heaven is likened unto a Man which sowed good seed in the field. But while men slept, His enemy came and sowed tares among the wheat, and went his way. But when the blade was sprung up, and brought forth fruit, then appeared the tares also. So the servants of the householder came and said unto him, Sir, did not you sow good seed in your field? From whence then has it tares? He said unto them, An enemy has done this. The servants said unto him, Will you then that we go and gather them up? But He said, No; lest while you gather the tares, ye root up also the wheat with them. Let both grow together until the harvest: and in the time of the harvest I will say to the reapers, Gather ye together first the tares, and bind them in bundles to burn them: but gather the wheat into my barn (my italics)." Then in Matthew 13:36-43, Jesus explains the parable to His Disciples where it says, "He who sows the good seed is the Son of Man; The field is the world; the good seed are the children of the Kingdom; but the tares are children of the wicked one; The enemy that sowed them is the devil; the harvest is the end of the world; and the reapers are the Angels. As therefore the tares are gathered and burned in the fire; so shall it be in the end of this world. The Son of Man shall send forth His Angels, and they shall gather out of His Kingdom all things that offend, and them which do iniquity; And shall cast them into a furnace of fire: there shall be wailing and gnashing of teeth. Then shall the righteous shine forth as the sun in the Kingdom of their Father. Who has ears to hear, let him hear." The variety of weed Jesus refers to as "tares" is also called "darnel" or "false wheat." It is called false wheat because as it grows it looks almost identical to true wheat. When it comes close to harvest time, the wheat turns golden brown; but the darnel turns black and is actually full of poison! The farmers in the modern wheat belt of America have to take measures to control the effects of tares on their cattle. In a 30 year study, 250,000 sheep and 600 cattle died because of it, not to mention the effects of intoxication on a score of others. The symptoms concerning the consumption of darnel are: sleepiness, drowsiness, hypnotic episodes, convulsions, drunkenness, intoxication, trembling, inability to walk, hindered speech, vomiting, stupefaction, dim-sightedness. Other sites I visited include giddiness, apathy and various abnormal sensations as effects of darnel. These symptoms describe perfectly the modern day Church world! Churches today are full of apathetic, sleeping, dim sighted "Christians," who no longer share the Gospel message of Jesus Christ and Him crucified, but are more interested in self-help or expanding the numbers in the Church pews. It is disheartening and sickening to those of us who see this damnable trend. Charles Spurgeon said, "Have you no wish for others to be saved? Then you're not saved yourself, be sure of that!" The result of the watered down social gospel preached by many in the pulpit today is a Church full of people who are living alongside the world without any conviction of sin. One effect of darnel mentioned above is the "inability to walk," which adequately describes the sinner who has no idea how to walk in the Spirit by following the Holy Spirit's guidance. Jesus sent the Holy Spirit after His ascension into Heaven and promised that the Holy Spirit would lead us into all truth (John 16:13). He also guaranteed that the Holy Spirit would be our power source against the bondage of sin. He commanded His Disciples to wait for the Promise of the Father (Acts 1:4)! The majority of the Churches today do not welcome the Holy Spirit and do not encourage their believers to be baptized in the Holy Spirit with the evidence of speaking in other tongues. This phenomenal experience was recorded in Acts 2:4, and while many preachers today claim it was only for the early Church, I can assure you that it is not! I personally experienced it and I can tell you that it is a Gift of God that has made all of the difference in my walk with the Lord! Before harvesting the wheat, there is time to distinguish between the darnel and the true wheat. The fruit of the darnel is smaller than the fruit produced by the wheat. Metaphorically, the fruit of the darnel is smaller represents the fact that the preachers who are teaching self-help instead of the Gospel will produce little to no fruit or "souls" for the Kingdom. The numbers in the Church pews may grow and most of these Churches are large in number, but unfortunately, they are full of unsaved people who come to hear motivational messages each week. These messages build up the individual when in actuality, we should decrease so that the Spirit of God can increase (John 3:30)! Sometimes it is hard to differentiate between true or false preachers but that is why we need Holy Spirit discernment to show us more clearly who is preaching truth and who is preaching false doctrine. One earmark of a Church preaching false doctrine is that the sermons are not about Jesus and what He did on the Cross for us; they are not about denying self and walking in the leading of the Holy Spirit, but the sermons are about "self." There is one thing for sure, the one who planted the good seed which bears fruit will come back to harvest His wheat and not one grain of tare will be found in the harvest!

While Men Slept… IS A WAKE-UP CALL
TO THE CITIZENS OF AMERICA
EXPOSING THE ENEMY
WITHIN OUR MIDST...

THEY HAVE PROMISED TO SILENTLY INFILTRATE OUR COUNTRY USING IMMIGRATION IN ORDER TO MULTIPLY THEIR VOTES, SECURE ALL POLITICAL POSITIONS, CREATE A CENTRAL BANK, PUT AN END TO OUR EDUCATION SYSTEM AND TO DESTROY OUR FREEDOM OF LIBERTY.

THE ENEMY STATED, "LET NO ONE AWAKE THOSE SLEEPING LIONS… LET US PRAY GOD THAT THEY CONTINUE TO SLEEP A FEW YEARS LONGER... WAKING ONLY TO FIND THEIR VOTES OUTNUMBERED AS WE WILL TURN THEM FOREVER, OUT OF EVERY POSITION OF HONOR, POWER AND PROFIT... WE WILL NOT ONLY ELECT THE PRESIDENT, BUT FILL AND COMMAND THE ARMIES, MAN THE NAVIES AND HOLD THE KEYS OF THE PUBLIC TREASURY... THAT WE MAY PUT AN END TO THEIR GODLESS SYSTEM OF EDUCATION AND IMPIOUS LAWS OF LIBERTY OF CONSCIENCE.”

WHO IS THIS FIERCE ENEMY THREATENING
TO DESTROY THE
UNITED STATES OF AMERICA?

I spent 32 years in the Roman Catholic religious system which claimed that I had to work my way to Heaven, but I never truly understood this religion which I had been baptized into at only 10 days old. When I finally broke free and became a “new creation” in Christ Jesus in 2005, the Lord began to open up to me the closet of skeletons that my religion had been hiding. The burden became so great for the salvation of souls that I felt compelled to write my first book entitled, What I Would Tell You, If You Would Listen. After writing it, I vowed to never write another book, but apparently God had different plans! One morning in reading God’s Word, He spoke to me a title and two months later I had a fully edited manuscript. That book, Men Rule…But God Overrules is an awakening to the reality of what is going on in this world today spiritually and politically. It reveals the sinister plotting of Satan to use men of this world to carry out his wicked plans. I did not publicize the book at all, but when Jorge Bergoglio, the first Jesuit pope to be elected, took the papal throne in March of 2013, I felt an urgency to warn people about the plan of the enemy.

This latest book, While Men Slept, is a result of watching the Church world, especially in America, being inundated with false doctrine and a watered down, social gospel which has created an apathetic race of people who no longer live holy and do not feel it necessary to share the Gospel of Jesus Christ with others. Knowing that the enemy had intentionally introduced this social gospel and promised the destruction of America, I could not rest until the truth was revealed. After God dealt with me for months about writing this, I could no longer ignore Him when He told me in Jeremiah 50:2, “Declare ye among the nations, and publish, and set up a standard; publish, and conceal not.” I am also a former educator and there is no better lesson than educating people about what Jesus accomplished for us on the Cross of Calvary; defeating Satan, death and Hell! I currently reside in the heart of the Cajun Country in South Louisiana with my husband and two children. I continue to research and write while also working as a photographer specializing in family, children and senior portraits.