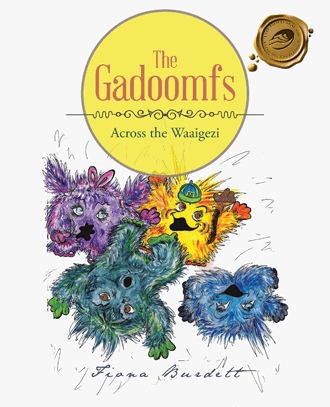 Long, long ago in another time and place, a mystical continent stood proud between the warm Imajian (Im-aj-ee-an) Ocean in the east and the icy Mysteriatic Sea in the west. This continent called Figmentica was so diverse and unusual that you may not even believe in it!

Whimsical and wonderful creatures lived there. They came in all sorts of colours, shapes, sizes, and consistencies! Some of the creatures were delightful, but others were utterly ghastly!

This story does not take you all over Figmentica. Such a large continent would take many stories to cover. Four extraordinary countries formed the very heart of Figmentica, and this is where our story happens. We cannot call the residents of these countries “countrymen” or “countrywomen,” because they were not men or women at all! They weren’t even human! So we will simply call them Figmenticans.

Figmenticans of all shapes, sizes, and consistencies stayed close to home, always nervous of whom or what they would find if they ever dared to travel. Some of them were even too afraid to venture outside of their own towns or villages!

The continent was divided into north and south by the Great Canyon. The enormous Canyon was so deep and so rugged that most Figmenticans believed it could never be crossed. The wild waters of the Waaigezi River crashed and tumbled all the way down the Canyon until they spilled into the icy Mysteriatic Sea.

The countries to the south of the Canyon were charming, beautiful, and peaceful. Just north of the Great Canyon, the Land of Smear stretched wide and desolate like an ugly scar across the continent.

The northern border of the Land of Smear was formed by gigantic cliffs. The colossal cliffs were so steep and so high that no creature, big or small, ever dared to climb them. Even birds could not scale these cliffs. The strongest of wings would tire before they reached the top, and the sheer cliffs were as smooth as polished marble. Not even a stick or ledge offered rest to weary fliers who attempted to reach the top. Bones lay scattered at the base of the cliffs—a chilling memorial to the few winged creatures who had tried in vain to reach the cool, misty Land of Thud.

The Legend of Poofy and Nibbles

Long, long ago, in the enchanted land of Goodlybuttonswell, lived the Gadoomfs.

Gadoomfs were soft and furry and came in all different colours. The gentle creatures lived their lives much like we do today; adult Gadoomfs worked hard, young Gadoomfs went to school, and baby Gadoomfs ate and slept and kept their mums and dads very busy!

Goodlybuttonswell was a delightful place. All year round the orchards of glorious Wappy-tappy-topalop trees were laden with every kind of fruit you could ever dream of. In the fields nearby, flowers of many different colours were always in bloom. They blossomed bright and cheerful as if they were made from the deepest beams of dazzling rainbows.

There were other trees too called Sapacans. The Sapacans provided a soft, waxy resin that was used by the Gadoomfs to make candles. The resin smelled just like spring flowers in bloom. Every family in Goodlybuttonswell used Sapacandles to light their homes at night, and every home smelled like spring flowers every night of the year.

The Gadoomfs shared this lovely land with the Fluttersparks. Fluttersparks were bright and colourful but that was not all; on their heads, each and every Flutterspark sported a dazzling pair of twinkling sparklers!

Every day they fluttered and darted amongst the flowers whilst they played with the Gadoomfs. As evening approached, and the sun’s warm rays faded into darkness, their sparklers began to glitter and glow just like fireworks in the night sky. The Fluttersparks lit up the little village in Goodlybuttonswell like a million dancing fairy lights. Fluttersparks could not control when their sparklers lit up; this wondrous thing happened all by itself as soon as the light began to fade every evening.

What a lovely land this was, and you would think that the Gadoomfs must have been the happiest and most contented little creatures that had ever lived. Sadly, this was not so, for the Gadoomfs lived in fear!

In the land of Goodlybuttonswell, surely there was nothing to be afraid of? The Gadoomfs were very afraid. The poor furry little creatures were terrified! What could it be that scared them so?

Over the fields of flowers, just beyond the orchards of Wappy-tappy-topalops lived two fings! The Gadoomfs lived in terror of these two monsters. Around the dinner tables in all the homes of Goodlybuttonswell, the elders warned their little ones never to venture beyond the orchards.

Stories were told throughout the land of how these fings ate young Gadoomfs and used their bones for toothpicks! Legend told of their bloodred eyes, their razor-sharp teeth, and their breath that smelled like dead rats!

The terrifying fings even had names! One was Poofy; it was believed that, before he attacked, he poofed himself up and trapped his poor victims in his long ginger fur. The other was known as Nibbles because he loved to nibble on the soft, tender flesh of small, juicy Gadoomfs.

All the young Gadoomfs obeyed their parents; they never went beyond the orchards, until one sunny day, four little Gadoomfs wandered farther than they had planned! These particular Gadoomfs were siblings, the Burpigetts.

Goose, Boo, Daddoo and Bear set off on a wild adventure. Their mission is to find a mysterious map in a bottle. If they fail, the wicked Foosnags will invade Goodlybuttonswell and they will all be doomed!

As they traverse across the mystical and wild continent of Figmentica, they find themselves on a voyage of discovery. They meet all sorts of fascinating and unusual creatures along the way and learn much about their continent, which they have never dared to explore before.

Will they come to understand more about their fellow Figmenticans or are they on a voyage of self discovery too?

Most importantly; can they save Goodlybuttonswell from certain doom?

I was born in Africa and have lived on this glorious continent all my life. I grew up in a remote part of Zimbabwe called Nyamandhlovu which means Meat of the Elephant. I am the youngest of six children, and my childhood was blessed with the joyous pandemonium that only such a large family can bring! I attended boarding school as a weekly boarder for my entire schooling career. My life has been blessed with times of chaotic company and fun but also with many moments of quiet solitude to be alone with my paintbrushes and the stories in my head. I have been visited by tragedy and heartache, happiness and love – the last two of whom; I am glad to say, have been my most constant and long lasting visitors. I am now deeply in love with and blissfully married to my best friend and soul mate – Mark. He is my pillar of strength that calms and channels the chaotic buzz in my creative brain! I have four hilariously diverse children in my life. They are a constant source of hilarity, frustration, love and inspiration. The mere thought of them “bubbles up a warm giggle” as I reflect on what a blessing they are to me. Before I started writing The Gadoomfs I worked as a painter, now I do both. Whether writing or painting, I spend my working hours in my studio which is nestled amongst enormous Masasa trees. We live in a remote part of Zambia, still in the bush; bliss.