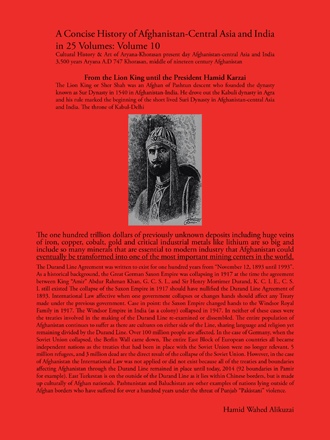 Thirteen years after the U.S. invasion of Afghanistan, the gains that the international coalition has made with its local partners are real but reversible. Afghanistan is no longer a global hub of terrorist activity, but Taliban resurgence would threaten to make it one again. Reconstruction assistance has produced demonstrable progress in health, education, and economic well-being, but corruption and governance problems have undermined popular support for the government in Kabul and constrained the overall level of progress. Internationally, a coalition still backs the International Security Assistance Force (ISAF) military mission. However, NATO’s will is waning; China, Russia, and India are largely free riders; and Punjab and Iran publicly say the right things, while destabilizing Afghanistan by privately meddling to their own ends. Political and economic realities in the United States make the current level of American engagement in Afghanistan unsustainable. But as the commitment of coalition partners fades, what Washington decides will shape the future of South Asia. Looking ahead, there are three different scenarios for American engagement in Afghanistan. It remains to be seen exactly which route Washington will take. But it is clear that U.S. interests require a long-term commitment not only in Afghanistan but across the region. Lest it be forgotten, the consequences of ignoring the region in the 1990s were visited upon the United States on 9/11. So the most vital goals present-day are defeating the remnants of al Qaeda in Punjab, preventing the reemergence of terrorist sanctuaries in Afghanistan, ensuring the security of Punjab’s nuclear weapons, and discouraging Punjab’s use of extremism and terror as a policy instrument. There are three ways forward. Each entails a different degree of involvement and carries varying risks and rewards. The first option is the riskiest. Future #1: Immediate Departure and the Reallocation of Resources because discontent among the U.S. public over the war is already at an all-time high.

Preface to the edition

These books present for History an understanding what has come through from Aryana to Afghanistan, from past to present – a priceless legacy: Aryana-Central Asian Heritage.

What in brief is the Afghanistan¬ Central Asian Heritage? It comprises certain skills of the historian. In the use of materials that produce Afghanistan everyday standard of living it is the science that searches, and will continue to search, for fundamental social constructs and historical laws which are basic to the skills and business of the moment; the contributions of art, literature, philosophy and religion to the wealth of the mind and spirit; the formal institutions that express and discipline Afghan life; the safeguards that guarantee to the individual his freedom of thought and of expression of worship.

The actors in the long drama of The Afghanistan-Great Central Asian Civilization could not know the full consequences of their thoughts and actions. Each, following lights perceptible to him, did his job within limited horizons. The common man laboured that he might live from one brief day to another; the merchant transported goods that he might find a profit at the end of the journey; the artist and author mirrored what they saw in life about them; the philosopher, the scientist, the priest, each in his own way, sought eternal laws which rose above the haphazard and the ephemeral; the statesman endeavoured to guide vital forces into channels that would benefit him and his people.

The historian records the flow of these myriad currents, noting what is characteristic and enduring about them. He must do more than record; he must analyze, with an attitude, which is at once sympathetic and soberly judicious. It is no slight task to follow threads spun unwittingly by the multiple hands of history.

To allow facts to divulge their meaning and avoid worrying facts into meaning they do not have, to perceive discord in plausible noises and to hear significant harmonies in the midst of discord, to avoid missing the obvious and to seek out the quietly hidden revelation. But analysis is not enough; neither is assembly of facts or inferences or themes. Every historian including this one hopes to achieve a synthesis, to recapture from shrouded eras something of the life ancestral to Afghanistan.

Born in Kabul in 1949, and educated in a French school until the age of seventeen, Hamid’s education was enriched and very influenced by his grandmother, his mother’s mother, who was highly educated and passed down ancient wisdoms and cultural heritage. These stories, wisdoms, and discussions touched him deeply and so profoundly that he began even as a young boy to live his life in a way that reflected these teachings. His grandmother’s history, culture, wisdom, ideas and knowledge of all religions and the 9 prophets was taught to Hamid. Each story or pearl of wisdom took his grandmother sometimes as long as two to three weeks to tell. In preparation for these teachings the children would have to bathe from head to toe and put on fresh clothes. Every day was like Christmas when his grandmother was there. To Hamid she was looked and spoke like an angel.

Hamid’s father, Wahed Alikuzai, was educated in Europe until 1932 in nuclear science for the military and there was very strict discipline and order in the house. Education was the number one priority. Hamid’s father was also very powerful in his knowledge and connection with the ancient way of life and our connection to the earth .His father had a one hundred percent firm belief that all people are equal, regardless of faith, education or social status.

In 1919 the King of Afghanistan believed and passed down a law that there would be no distinction between people. There would be no such thing as a first, second or third class citizen. (The word Afghan translated means first class citizen). All people no matter what their background were very proud to be Afghan. This description of the way of life with the nature and equality of people was the fundamental foundation passed down since 3 000 years ago .Since then unity began.

These two individuals in Hamid’s life, both father and grandmother, were key in Hamid’s development and shaped and inspired his life but also were the fire behind the huge passion Hamid had for history. Upon completion of French High School in 1967, the university was closed due to fighting among the religious groups and the communists. Hamid took a job with the Supreme Court of Afghanistan, and after one year had a scholarship for International Law which was his ticket out of the country. Hamid chose to go Germany to further his education, and entered Germany with his diplomatic passport, fluent in French and Russian, and some English. In one year he spoke German freely. At the age of seventeen, Hamid was alone with no family in Germany except the shadow of his father and the teachings of his grandmother that gave him the foundation that would carry him through the next phase of his life. Under the influence of his father and his father’s best friend, who was a five star General in the Afghani army, Hamid would be changing his studies from International Law to Engineering, because of the Islamic movement in Afghanistan. Were he studying law, Hamid would not be welcome back into Afghanistan and therefore it would be more beneficial to study something that would suit the needs of the country. So for the next eight years leading up to 1975 Hamid studied engineering and history in Hamburg Germany.

He took a vacation to go back home to Afghanistan in 1975 with high hopes of staying. At twenty-six Hamid had gained quite a bit of knowledge of his own and was excited to share this with his father. For forty-eight hours straight he proudly talked about all that he had learned as well as some really good engineering ideas he had with his father. On the third day, Hamid’s father explained his concerns because of the current changing of the regime – Afghanistan had become a republic in 1973 during a coup d’etat influenced by Russian powers. During Hamid’s visit his father was put under house arrest by the new head of the republic, Daoud Khan. Mister Alikuzai, Hamid’s father, was ordered to pay a hundred and fifty million Afghanis to the government. Hamid visited at the courthouse in all of the ministries for letters of recommendation about his father but to no avail. At any given time there could be border closures between Afghanistan and its neighbouring countries. Hamid’s father Wahed Alikuzai was thinking that he had made a mistake in believing that Afghanistan was a free country - since 1929 Afghanistan was not an independent country because of the Cold War and Russia’s involvement.

At midnight on the third night of his visit, it was decided that Hamid would leave as early as 6a.m. to Iran and then back to Germany. At 5 a.m. Hamid got dressed and knocked on the door of his father’s room to say goodbye. This is the last time Hamid would ever see his father again. His father already sitting up in bed stopped Hamid from stepping further into the room. With two fingers raised in the air his father began to say that he only had two years to live whether in jail or in his own bed. Hamid and his father had an agreement that Hamid would write a letter letting his father know that Hamid had passed through the border safely. Passing through the border by car early in the morning, from Iran Hamid drove back to Germany. His diplomatic passport enabled him to continue his studies on many subjects for the next twenty-two years in Germany. Several years later, in 1979, he wanted to renew his passport at the Afghan embassy in Bonn. They refused to renew his visa and kept Hamid’s passport, saying he would have to return back home to Afghanistan.

Hence began Hamid Wahed’s next course of action to become a German citizen. Hamid’s best friend Paul, who studied law, sent a letter to internal and foreign affairs in Germany. The choice was either political asylum or citizenship, and never having being involved with politics Hamid chose German citizenship. Paul made the arrangements for the citizenship interview. When sitting face to face with the authorities, Hamid was told to put down in his own words and hand writing what was talked about in the meeting. Having put it in letter form, Hamid returned with the letter personally to deliver it. When the man saw the letter he told Hamid he was leaving for six weeks vacation but he would send the letter to internal affairs and the decision would rest upon the German authorities. It was unknown how long this process would take, whether it would be one year or ten years. This gentleman after six weeks called Hamid on the telephone and said congratulations they have accepted you as a German Citizen. Back in Afghanistan the Russians invaded in December 1979. Hamid was never to visit the country of his birth again, not even for his father’s or his brother’s funeral. His brother was an air force pilot killed in Kandahar by the Muslim Fundamentalists after passing his astronaut exams.

Meanwhile Hamid married in Hamburg, and on the 15th of April 1981 his first son was born and July 6th, 1983 his second son was born. In 1982 the young family came to Las Angeles, California although he would return with his wife and children would return to Germany in 1983 before the birth of his second child. In the years from 1988 to 1994 Hamid had moved to the United States and was working and studying in Los Angeles. From May 1994 Hamid Wahed came to Vancouver B.C Canada, because Hamid wished to see his mother, brother, and sister. His mother and sister immigrated by walking for three months to New Delhi, India from Kabul, Afghanistan, when the Taliban came into power in Afghanistan in 1992. At his mother’s urging the family reunited in Vancouver, B.C Canada after a twenty-eight year separation. Hamid hadn’t seen his little sister since she was one year old.