Trimming the Fluff from a Fragmented Faith 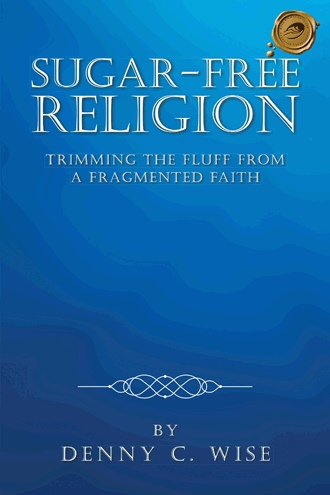 Sugar-Free Religion is part biographical, part religious instruction and part just a fun read. Denny believed we are called to be Christian change agents. As such, he believed we must be willing to relate not only to the beautiful people of this world, but to the not so beautiful, as well. We are called to give hope to the hopeless, and love to the unlovely. That is what Jesus did, and that is what he calls us to do. In short, the whole Gospel is not about following the right rules. It is about following Jesus and loving your neighbor. It is not about believing the right stuff; it is about personal life-changing “relationships.” Relational Theology was Denny’s entire ministry. It is what he taught and how he lived. So if you really want to expand your consciousness and find your true authentic self, then why not try looking at every person you meet as a special gift from God? Every stranger is a wonderful opportunity for you to experience new joy, self-fulfillment and self-discovery. So reach out and touch someone! Comfort a friend who is hurting. Give hugs to everyone. Be kind to a lonely child. Visit the aged in nursing homes. Take flowers to someone who is sick. Bring cheer to someone who is dying. Give comfort to someone in grief. Gladly give yourself away. That is how you find your life, by losing it!

Most of the stories and examples in the book come from first-hand experience. From Wilmington to Burlington and from Laurinburg to Oxford, he became a part of the lives of the parishioners he was sent to serve. So get ready to have your heart “strangely warmed” as you read the pages of his book. He will knock the sugar coating, the marshmallow fluffiness and even the sugar sprinkles from your faith. Open your heart and your mind for a new experience. Don’t worry if a few things fall to the wayside. That’s OK, because from there you can begin to build your own bright, shiny faith---free of the stickiness. Experience now the joy of living a life without the “ick.” ---Judy Wise

My husband, Denny C. Wise, is the author of Sugar-Free Religion. It was his prayer that this book might bring a little light into the midst of our darkness. He grew up in Manteo, North Carolina and thus began his love of all things coastal. During Denny’s formative years, church was an important part of his life. He knew all the bible stories and could answer all the questions posed to him by Sunday school teachers. He was living an idyllic life as a beach bum until, at age 10, his father, a butcher, put down his cleaver and picked up a Bible becoming a United Methodist minister. Denny hated the “fish bowl” aspect of parsonage life and vowed once he left, never to return. Then he took a religion course at North Carolina Wesleyan and the professor questioned everything his students held sacred. Finally, one day near the end of the semester, the professor said something in class that bothered Denny, so he made an appointment with him. The professor responded to Denny’s question, “At last, I thought nothing bothered you.” So the professor and he sorted through Denny’s beliefs until they discovered a core that Denny knew nothing could shake. He began to build his theology. He took more religion courses and by the time he graduated, he knew what he wanted to do with his life and he knew the direction he wanted to go with his theology. He went first to Candler School of Theology at Emory University in GA for one year; finishing his last two years at Duke Divinity School, Durham, NC. Denny and I were married in 1967, just before his final year at Duke. Be sure and read “our” story in the book. Denny graduated with such excitement. He knew (as did I) that everyone who heard him would become a believer, but it didn’t work quite that way. Don’t misunderstand me, many, many people came to believe because of what Denny had to say. Denny served as a parish minister for 40 years, delivering his message of “relational theology” both from the pulpit and in his daily life. He retired in 2006 and we moved to Graham, NC. In 1999, he was diagnosed with Lymphoma and lived with the disease and the chemotherapy that goes with it for 14 years. In all of those years, he never missed a single Sunday worship service or meeting because of his illness. At the beginning of 2013, the disease took a more vehement turn and Denny did battle for almost a year, but in December we knew the disease was winning and he died on December 19, 2013. Denny and I have one son, Patrick, wife, Christie and grandsons, Cameron, Jose and Connor who live in Norcross, GA. We will never be the same as we were before the loss of Denny Wise, but we are ever so much better for having had something so GREAT to lose. (Paraphrased from Leigh Standley 2010, Curly Girl Design, Inc.) ---Judy Wise