by James A. Gauthier J.D. & Illustrated by Louren Bouldin 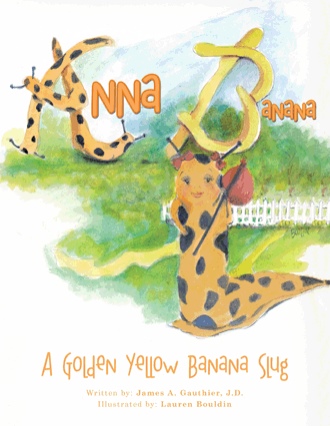 Meet Anna Banana, a young female yellow banana slug with black spots. Anna is tenacious and adventurous in exploring her surroundings and finding “Somewhere”. Anna sneaks away from her garden to explore the world around her. Anna learns that many animals want to eat her. Although she didn’t listen to her mother and stay home, she did listen to her mother’s warnings and how to protect herself from dangerous predators. Anna uses her knowledge to find her way back home. A lesson well learned about listening to her mother.

I have written many books on different subjects. This is my first attempt at writing a children's book. I have previously published Emily, Emily 2, Inside Out: New Beginnings, Rise of the Monarchy, and Final Conflict' Surrealeum Dreams, Interstitial Beings, Ian & Eli, and Unacceptable Expectations. I am publishing Amy's Kourt with this book. Amy's Kourt is for young adults of all ages.