A Young Girl's Efforts to Help Her Community

by James A. Gauthier J.D. & Illustrated by Artist Lauren Bouldin 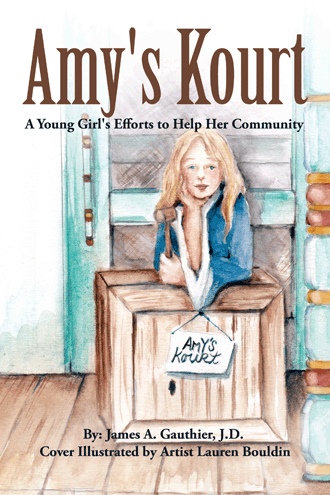 At age seven, I began my career as a judge. My neighborhood knew me and understood that I could be fair and impartial in making decisions. I had learned about fairness, called equity in the law. I believed that when I made a decision to punish behavior that I did so impartially and without regard to the parties involved. I had proven my ability to resolve disputes early on and wanted to pursue my life as a neighborhood judge. It was my eighth birthday and my brothers Tom and Gary asked me what I would like as a present from them. I replied, “I like being a judge for the neighborhood. I would like to use our back porch, if it is all right with mom and dad, to set up a courtroom to hear cases arising from our neighborhood.” ¬¬¬¬¬¬¬¬¬¬¬¬¬¬ Gary received a trial date. I was called to testify. I looked at the judge square in his eyes and said, “My brother drove a car without a valid driver’s license because of an emergency. My mother’s water broke and the nearest ambulance would be longer than thirty minutes. My brother Gary was legally justified in breaking the license law because of the medical emergency he was facing.” The judge asked, “Why didn’t you explore any alternatives?” I explained, “I called our neighbors, but no one was home, or at least didn’t answer their phones. We couldn’t get a timely ambulance and I gave Gary permission to drive mom’s car. If someone is guilty, it should be me. My brother was acting as I directed.” The judge asked me if I was Judge Amy from Amy’s Kourt. I replied, “Yes I am.” The judge asked me what punishment should be given in this case. I looked at the judge and said “None. An emergency can serve as a justification when other reasonable options are not available.” The judge asked, “Where did you learn that?” I replied, “I read about defenses to tickets and justified behavior. I think Gary qualifies. At least that is the judgment that I would give this case. Gary was acting as a Good Samaritan.” The judge said, “I agree. Case dismissed. The judge then asked why I carried a bag around with me.” I explained that it held my judicial robe and gavel. I never know when I will need to act as judge at school or at home. Judge Rodgers asked, “Amy would you be interested in sitting in my courtroom on Tuesdays and observing my courtroom in action?” I was so excited. I turned to my mother. Before I could ask, she said, “Of course you can. I arrived in court on Tuesday. When I walked in, the lady sitting next to the judge said, “All rise for Judge Amy.” I was in shock as she directed me up to where she sat and showed me my chair next to the judge. Judge Rogers said, “If you are going to learn to be a judge, then you need to sit up here with me. We will talk about the cases when we take a recess.” I began to laugh and asked, “Do judges really have recess too?” He replied, “Absolutely. At recess, you and I can talk about the cases and procedure and have something to drink.” I kept notes of courtroom procedure. I wrote down how to swear in a witness and learned who the bailiff was and which parties were called plaintiffs and defendants. I noticed that the cases weren’t that much different from my cases.*** Elizabeth replied, “My dad is dead. My mother is a drug addict. I have a little sister that is six years old. I use the money I make from the pot to buy us food. I can sell pot and receive a 50% profit. I get so depressed that I began smoking pot. However, I am always clear headed when I pick up Jenny from school. I am fifteen and don’t have any means for a regular job. I could sell pot or prostitute myself. I chose pot. I’m sorry, but that is my life. I won’t let child services take away my little sister.” The lawyer called Jenny as a witness. The lawyer asked Jenny, “Who takes care of you at home?” Jenny testified, “Liz gets me up and dressed in the mornings. She always tries to find us food before we go to school. If she finds a little bit, she gives it to me for breakfast and my lunch. Liz won’t eat anything until I have eaten. Sometimes we leave early and get free samples at the grocery store. Liz asks Mr. Templeton, the store man, if he has any bread that will be thrown out for pull dates as well as any other foods. Liz tries to make sure that I have food. I know Liz does bad things with drugs, but she tells me she had to do it to keep us fed. Liz picks me up after school and we walk through the store before going home. I don’t think Liz tries to do bad things. I think she is just trying to protect and feed me. Liz is always waiting for me when I get out of school. She holds my hand as we walk home. I know that Liz loves me. She gave me her warm blanket when my blanket had holes in it and didn’t keep me warm. Many times Liz and I sleep together and our bodies keep us warm when there is no heat in our house.” I said that I needed to take this case under consideration. I would return in ten minutes with my decision. I walked off the bench and began crying in my chambers. Judge Rodgers comforted me and asked if I wanted help with this case.I replied, “I am the judge and my job is to make a decision that follows the law as I understand it.”

Amy’s Kourt is an excellent book to teach young people about the court system from understanding the roles of judges and bailiffs to identifying plaintiffs and defendants. Terminology is presented to better understand the role that attorneys and jurors play on the judicial stage. Amy’s Kourt is a fun book to read for all ages. Amy begins her judicial career at age 7 in her neighborhood. Over the years, her role expands into becoming a school judge and ultimately starting her own private court system. Amy is loved and respected, especially by a wealthy businessman that leaves Amy his fortune so that she can continue to help the community. Amy’s younger sister, Cynthia is Amy’s twin, separated by seven years in age. Amy and Cynthia together create a help center that provides clothing, emergency housing, and food in very non-traditional ways. The reader will understand about the help center when two little girls ask for shoes. When asked what kind of shoes they would like, the girls reply, “The kind that don’t have holes in the bottom.” Amy recognizes that the working poor are represented by those families occupying big homes and owning things like motor homes and boats. Parents can’t meet their children’s basic needs and still pay for expensive recreational vehicles. As a result, the children often go without as pride prevents this type of parent from accepting help. Amy’s tenacity brings help where needed. Amy’s Kourt is a book about helping others when you have the means to help. Amy teaches about caring and sharing with others, while expecting those being helped to do the things necessary to help themselves. James A. Gauthier, J.D.

James A. Gauthier has published several books including Emily, Emily 2; a trilogy called Inside Out: New Beginnings, Inside Out: Rise of the Monarchy, and Inside Out: Final Conflict; Surrealeum Dreams, Ian & Eli, Near Identical twins; Interstitial Beings; Anna Banana, the Golden Yellow Banana Slug; and Unacceptable Expectations. His books leave the reader asking questions when the book is finished. His books are informative and generally teach a moral or looks at alternatives to the road taken by most travelers. The books are easy reading and enjoyable for most ages.