Tales of a New York Yankee 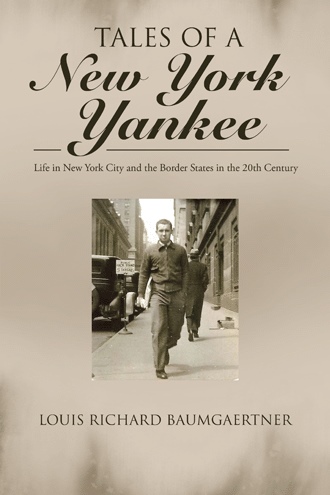 I was born on November 3, 1916, on a beautiful, warm, sunny day, according to my mother. I was baptized at St. Joseph’s Church in the Bronx on November 12, 1916. They named me “Louis” after my father and called me “Junior”, a sissified name that was to haunt me until I was sixteen. Mother told me that when I was a baby during the First World War, she had to pay 90 cents for an orange for me. This is the equivalent of paying about ten dollars for an orange today. [Editor’s Note: This “ten dollar” equivalent is in 1989 dollars. In 2016 dollars, that same orange would have been equivalent to $19.56.] In the early 1920’s, we moved to Kingsland Avenue (previously Main Street, later 43rd Avenue), Corona, Long Island … when we first moved in, there were no sidewalks and the road was unpaved, with a single streetcar track down the middle. There was a boot-scraper on the front steps of the house, and it was put to frequent use removing mud from shoes during rainy spells. The streetcar was a four-wheeled Birney type, called by some a “dinky” trolley. It terminated at the east end of our long street, where the motorman switched the trolley pole to the other end of the car, and began the return trip to Elmhurst and connections to Ridgewood and Brooklyn. As a little boy, I used to put colored stones on the track to get colored powder after the trolley passed. The motorman used to shake his fist at me as the trolley rocked over the stones. We also used to flatten pennies on the track. I was pretty much a runt until I was nearly sixteen, and thus fair game for bullies. When I would walk home from the “L” wearing my school uniform, the Italian toughs on Havermeyer Street, the next block north of Kingsland toward the “L”, would ridicule me and call me “Jooniyah”. That’s why when the kids on our block played them at stickball, baseball, or football, I was out for blood. They were probably better athletes than us, but we won as often as we lost playing with them. In my last year of high school, my Aunt Berna (3½ years my senior) taught me how to dance. When I graduated, she helped me have a graduation party at my house. She helped me pick out and buy records for the dancing. Songs that remind me of that evening are “I Cover the Waterfront”, “Pettin’ in the Park”, and the songs from the movie “Forty-Second Street”. We invited fellows and girls of my age from the neighborhood, about a dozen of them. Aunt Peach’s garage was newly built, so we waxed the cement floor and used it for dancing. We used the lawn in the backyard for our games, “parlor rugby” being the most memorable. In this game the boys are given even numbers and the girls odd. A girl sits in the center and calls two even numbers. The fellow who reaches her and kisses her first gets to sit down and call two odd numbers, and the two girls try to get to him first. And so on. I got a lot of grass stains on my white pants at that party. The kids in our part of town went in for a lot of games in those days before TV. In addition to listening to The Shadow, Chandu the Magician, Inner Sanctum, Fibber McGee, Amos and Andy, etc., etc. on the radio, we knew how to keep ourselves entertained: one o’cat, ring-a-leavio, kick the can, buck-buck-how many horns are up, mumble-peg, prisoner’s base, etc., etc. We also used to get up neighborhood athletic teams and play one another, sometimes for money. In baseball, I was always a late swinger so that, as a right hander, I hit the ball into right field instead of left field. That meant that whenever we played a new team, they expected me to hit to left field, and they’d move their better fielder there. But I would usually belt one over the right fielder’s head the first few times at bat. I remember one game with a team we called the Robins, I hit a home run the first time up at bat, and a triple the second time, before they wised up how to play me. I could also hit the ball right down the middle. One time the opposing pitcher was “dusting off” our players, one at a time, including me. So, the next time up at bat, I waited for the right pitch and sent a screamer right back at his belt buckle. He almost broke his back trying to get out of the way of the ball. I think that was why that particular game broke up in a rock fight.

Lou Baumgaertner was born and bred in New York City, and although he also lived amongst the Border States, and even in the South, he was a New York Yankee to his dying day. Part of that, of course, could be attributed to his being a die-hard fan of the best baseball team in the world, the New York Yankees. But being a New York Yankee also meant so much more … New Yorkers tend to be different from those who live in other regions, and frequently are easily recognized by others as either being “different”, or more precisely as being “from New York”. Sometimes that recognition is not accompanied by a warm feeling of acceptance. But we New Yorkers know we are different. We have our own accent – although those who live in New York City might argue it’s all the others who have accents … we speak perfectly normally. Because we live in a Big City, we talk fast, we seem brusque, and we sometimes appear to lack patience with others. We don’t mean to be rude, but the demands of surviving in a Big City (almost any Big City) require a no-nonsense attitude to life to avoid being run over by those around us. But once you get to know us, we’re pretty nice people. We New Yorkers are proud of ourselves, and of our city, and we have a right to be. It may not be the Capital of the Country, but many New Yorkers often think of it as such … to a true New Yorker, there is only one New York City! And New York City is the Business and Cultural Capital of the Country! This ubiquitous sentiment is why New Yorkers are so often accused of not playing well with the other kids on the block. And New Yorkers are definitely Yankees. No one should argue with that point. We live well above the Mason-Dixon Line. We fought for the North during the Civil War. And although there are others who can rightly and proudly also proclaim themselves as being Yankees, these other Northerners don’t also happen to have the best baseball team in the world residing in their city, now do they? And so, by way of example, let’s take a look at one particular New York Yankee. Lou Baumgaertner was a War Baby, born in the Bronx during the First World War. He spent his childhood in the Bronx and Corona during the Roaring Twenties, and began to mature in Corona and Manhattan during the Great Depression. He worked in Manhattan for years, but eventually got an opportunity for a new career in radio-communications in Louisville, KY. He tried to avoid induction into the military as World War II geared up, but eventually found that no one who could hold a rifle and shoot straight was going to miss the opportunity to serve his Uncle Sam. Like so many of his generation, the Second World War finished the maturing process, and put a fine polish on the person he had become. Here then are his adventures, in New York City, during World War II, and amongst the Border States, during the 20th Century.

About the Author: Lou Baumgaertner was born and bred in New York City, and was a New York Yankee to his dying day. Part of that, of course, could be attributed to his being a die-hard fan of the best baseball team in the world, the New York Yankees. He was a War Baby, born in the Bronx during the First World War. He spent his childhood in the Bronx and Corona during the Roaring Twenties, and began to mature in Corona and Manhattan during the Great Depression. Like so many of his generation, the Second World War finished the maturing process, and put a fine polish on the person he had become. His memories provide a rich historical background to life in the 20th century, and especially of New York City in the early twentieth century. Here then are his adventures, in the Big Apple, and amongst the Border States. About the Editor: Gene Baumgaertner has published 8 other books with Trafford, two history books and six novels, including two fictionalized, semi-biographical works about the Baby Boomer Generation.