by Francisco A. Cruz & With Maria T. Del Rosario-Cruz 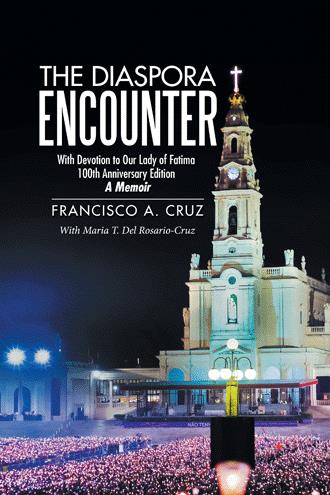 FATIMA APPARITIONS – MAY 13, 1917 “The Most Holy Virgin is very sad no one has paid any attention to Her message, neither the good nor the bad.” The Eurasian Gentile in Trilogy is now further enriched in merit from the original thesis. With the two abridged books envisaged for its value of benevolence; in philosophical context as inspired in thought and minds of the author. Thus, it was “A PROPHECY OF WARNING BY MARY AT FATIMA IN 1917.” In this brief journey of a lifetime for the storyline from early 1900s; inherently, represented only a partial existence in its historical context; nevertheless, found to be richly sourced from the Scripture written by authors of Old Testament and the New Testament in which both accounts are inspired by the Holy Spirit; in Luke, John, Matthew and Mark was manifested. And, markedly categorized into these three subjects: centered on the topic of Religion above all; then, to Historical accounts; and, ultimately into Cultural evolution of a unique class of people; who defined themselves as of the Macanese (Eurasian) ancestry. For the timeline, it is the first half of the twentieth century; namely, in World War I and II; fought with greatest battlefield clashes and devastation of civilization. Whereas, if humankind persisted in warfare mentality by nations to control power over the entire world; akin, to attitude of the One World Order Entity. Seemingly, the weapons of mass destructions in the nuclear age would face another past reality as was such in Japan. Now, the modern culture is readily launching into an even worse encounter, for the World War III event; “Heaven Always forbids this!!!” If evil nations are not contained in time of their current wicked ideology; abide by all the peace loving countries; it could wipe out half of the world’s population… Enough is enough into the practice of “Culture of Death” for the society today!!! Now, formulated in a labor of love to all those who would seek interest in reading the greatest biblical account that mirrored in the epic story of Moses from the Old Testament in the Exodus of Jewish people for forty nomadic years in Egypt. Being retold in vivid resemblance of the contemporary narrative in ‘The Diaspora Encounter’ ascribed from the first book in ‘The Eurasian Gentile’ and now being magnificently culminated with this second edition of ‘The Diaspora Encounter.’ This storyline is linked to a Prophesy of 1917 in Fatima, Portugal. Essentially, from a layperson’s viewpoint, in a Judeo-Christian Ethics Encounter; and, this may well be heeded, all for the glory of God. As seminarians, at the St. Patrick Seminary & University in Menlo Park, California with his wife Terry (Maria Teresa Del Rosario-Cruz), who studied for three years in Theology from 2001-2004; a commitment as prerequisite for the Diaconate Formation in order to be an ordained deacon in the ‘Class of 2006’ from the San Francisco Archdiocese. It was during Lent, the ‘Forty-day’ liturgical season of fasting, special prayer and almsgiving in preparation for Easter. The number ‘forty’ is noted in the Canon of Nicaea (A.D. 325), likely in imitation of JESUS fast in the desert before His public ministry; with Old Testament precedent in ‘Moses and Elijah.’ “On February 26, 2016, with extreme sorrow from the abyss of his heart, Terry has suddenly passed away at the Hospital in Oakland of her untimely death after a major spinal surgery on the previous day; from a severe heart attack that ensued to have caused the cessation of life; of his beloved wife.” Thank you Terry for the encouragement to write a book for the children of the extended family; included, your remarkable editing work in first two volumes of the Memoir; with wise counsel, incisive insights she gave; and, good humor of the entire family with kindred spirits, all of whom gave beyond measure; throughout the nine plus years of research given to the project. In providence and belief, for anatomy and in spiritual sense; she was summoned and being sent as the heavenly messenger for completion of the Memoir in ‘Trilogy;’ primarily, have it in mind for their six grown children; for legacy of the extended family and future generations. Terry and Francis shared love for each other with fidelity; bestowed, in abundance of cherished memories for these last thirty years; on this good earth, America, in the land of ‘milk and honey.’ On 16th February 1986 they married and thus became one Christian family again; both were widow and widower previously. Equally, felt much blessed in this marital covenant, of a loving couple; she is humbled with attitude of openness to the will of God. “May God bless her abundantly, as disciple of Christ for the extensive work in evangelizing with faith and courage; all for His glory?” The Apostle Paul made clear on the profound marriage vow when he says: “Husbands, love your wives, as Christ loves the church and gave Himself up for her. And the two shall be one. This is a great mystery, in reference to Christ and His Church.”

As a historian of a different making, Francisco seeks to capture the heart of his past and that of spirituality through lifetime memories from boyhood days in Shanghai and Macau to day dreams as a young man in Hong Kong, from new family life in San Francisco as a naturalized citizen to rebirth of mind through a number of pilgrimages to Fatima, Medjugorje and Moscow with his extended family. Together with his spiritual partner and second wife of 30 years Terry, he witnessed the crowning of the Blessed Virgin Mary at the Red Square in Moscow for the 75th Anniversary of the ‘Fatima Apparition’ in Portugal. As just two amongst one thousand plus of God’s children from bishops to priests, theologians, brothers, sisters, youths and other laypersons that were there that day, they joined together at the 1992 World Youth Congress in Moscow to share a very special message with the world about the need for change. It was a message of ‘WARNING’ as prophesized by the Blessed Virgin, the Mother of God, on Sunday the 13th of May in the year 1917. But more importantly, it was also a call for love and spiritual renewal. There has been no phenomenon like it ever before recorded, but the miracle of the sun in Fatima continues to shine bright even at the darkest of times and is the hope behind this book. Many of history’s greatest thinkers have wrestled with the question of belief and non-belief in God through their literary circles and often simply by the way they have lived their lives: 1) “Is there a God?” and 2) “Why would He care about me?” Those are profound and universal questions considered in the first two books of this family story and re-visited here in this third encounter in trilogy. Though it might seem unlikely that any new arguments can be raised from either side between Science and Theology on Christendom, ultimately, each reader needs to ask through his or her own voice of Faith this question of GOD and His existence. It is at that spiritual juncture of question and answer that mankind may decide which path to follow. As seminarian students, Terry and Francis took three years of theology at St. Patrick Seminary & University in Menlo Park under the Diaconate Formation Program with the hopes of Francisco becoming a deacon with the Class of 2006. Though God had other plans for Francisco, both husband and wife humbly served at the Cathedral of St. Mary of the Assumption in San Francisco and at St. Bruno Church of the San Francisco Archdiocese for three decades. This soulful dialogue is for anyone seeking out answers about Judeo-Christian ethics and the belief that GOD reveals all in time.

Francisco Antonio Cruz is an immigrant, Macanese (Eurasian) refugee and expatriate; and, a naturalized American citizen since 1962. His beloved parents and the family practiced Roman Catholic faith predominantly within the San Francisco Archdiocese. Relocated in 2011- 2016 to the Sacramento Archdiocese at the ‘Trilogy;’ a great resort community for active seniors. Terry, his wife and he resided in Rio Vista to spend their full-retirement of a great marriage for the Golden Years. One accomplished with much gratitude; in an extensive career of a forty plus years tenure in Civil Service, three decades in banking; and five years as franchise owners with beloved wife, Doreen (deceased in 1984); of a Seven-Eleven [mini-market] in Fairfax, Marin County; and aggregated with an unbroken double-careers for thirty- years minimum. In 1986, remarried and lived with his wife, Terry in the San Francisco Bay Area for the last thirty years. Since 2011 resided at the ‘Trilogy,’ Rio Vista along the Sacramento Delta in California to enjoy a leisurely life for active seniors. They have six grown children (extended family), six grandchildren, and a Pomeranian dog, Rex.