Diversions That Keep the South Red, Poor People Poor, and Plutocrats and Oligarchs in Power 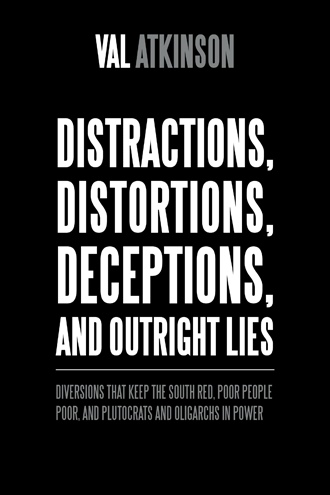 This book is about how conservatives use God, Guns, Gays, Gestation (Abortion), Genealogy (Race, Ethnicity and Gender), and ‘Gubment’ (Rights and Taxes), to deceive voters into voting against their economic self-interest. For more than a half-century, since the passage of the 1965 Voting Rights Act, conservatives have used these diversions to keep voters (mainly white working class voters) staunchly affixed to the conservative philosophy. But few of the Right’s strategies would work without the witting and unwitting cooperation of some of our well-meaning liberal and progressive Democrats and their unwavering commitment to bi-partisanship through compromise. Compromise can be useful, and even necessary, if we are to have a functioning Democracy, but lest we forget … unilateral compromise is not only an oxymoron, it’s also a synonym for capitulation. 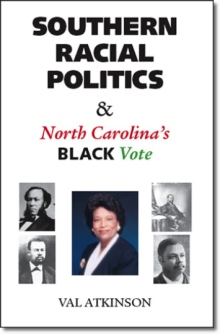 As far back as middle school, I developed a passion for understanding what motivated people to take the political positions they were taking. I wondered why most people couldn’t see clear things clearly and why they had to be told what politicians thought and felt. Couldn’t they see that for themselves? I also wondered why some people seemed to wait until things happened or unfolded before they began telling everybody why they were better than the other guy at solving the problem. I guess it wasn’t until my sophomore year in high school that I began reading more in-depth American history, especially American political history. I became interested in the second Adlai Stevenson–Dwight Eisenhower presidential race. I didn’t know anything about politics or economics. All I knew was that we didn’t have very much and some other people had lots, lots more. I thought Stevenson was on the side of those that didn’t have very much, so obviously, I wanted him to win. Little did I know that he was running against a Republican war hero and that Republicans were trying to paint the Democratic Party as sellouts because of their 1948 and 1952 platforms on racial desegregation. I had no idea that everything said in a presidential campaign didn’t have to be the truth. I didn’t think these grown men would lie just to win a job. Of course, I had lots of growing up to do. So from that point forward, I committed myself to the pursuit of truth in politics. I found that uncovering the truth about the American political process in the twenty-first century was far more than just a notion, and there’s still lots left to do.

Val Atkinson hails from Princeton, North Carolina; attended K-12 and college in the Tidewater area of Virginia (Portsmouth and Norfolk). He is a military retiree (U.S. Army), he also retired from North Carolina State Government. Val began his literary and teaching career in 1984 as an Adjunct Professor with Webster University, he also taught at Durham Technical Community College, and Wake Technical Community College, in Durham, NC and Raleigh, NC respectively. He concluded his teaching career as an Adjunct Political Science Professor at North Carolina Central University in Durham, North Carolina where he specialized in Media Politics and Party Centered Politics. Val began his writing career as an OP-ED columnist with The Triangle Tribune newspaper in Durham, North Carolina. His column also appeared in several black weekly newspapers across North Carolina (The Charlotte Post, The Greensboro Peacemaker, The Winston Salem Chronicle, The Fayetteville Press, The Wilmington Challenger, and the Daily Drum in Greenville, NC). He authored his first book (“Southern Racial Politics and North Carolina’s Black Vote”) in 2007. Val is in the process of starting his third book, entitled “The Electoral College in the 21st Century”. Since 1990, Val has hosted a weekly radio talk show, initially titled “Around the Triangle”, now known as “Connections”. Connections is a Public Affairs talk show hosted by Radio One of Raleigh (WFXC / WFXK), Foxy 107.1 FM and 104.3 FM. Val has also hosted a talk show at North Carolina Central University’s WNCU 90.7 FM, titled “Jones Street the Radio Talk Show”. Val holds a bachelor’s degree in Psychology, a Master’s Degree in Management & Supervision, and a second Master’s Degree in Public Administration. Val has also been accepted to pursue his terminal degree (Ph.D.) at the University of Phoenix.