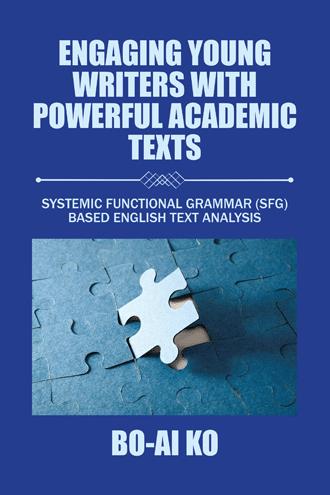 3.5.2. Transitivity To construct experiential semantic fields in Narrative writing, both Jinha and Sunyoung start to employ material processes and relational processes from early on and later on come to employ a range of mental processes to depict the participants’ inner world including their emotional conflicts and attitudes toward the key events. Particularly the mental processes of perception (seeing, hearing) come to play an important role in initiating the unusual element in the Orientation, along with creating some sense of tension, which might be linked successfully to the Complication (e.g. ‘I heard scary noises.’, ‘when she saw a strange man’). There are also differences in the children’s choices in the Transitivity system. Thus Sunyoung employs verbal and behavioural processes more symbolically and meaningfully in comparison with Jinha’s counterparts. For example, Sunyoung has certainly extended the range of verbal processes from some representative verbal ones such as ‘say’ or ‘ask’ to a semantically wide range of different verbal ones such as ‘complain’ or ‘whisper’ (in quoting clauses). Also some verbal processes are adjoined with behavioural verbs, enhancing situational contexts (e.g. She panicked and said,) or are used with some circumstantial elements as in ‘I whispered under my breath’. In many cases of Sunyoung’s Narrative texts, behavioural processes contribute to representing the participants’ symbolic or metaphorical action which can not be realized in material processes only. The significant usages of verbal and behavioural processes in Sunyoung’s Narratives outnumber Jinha’s counterparts and it can be claimed that this kind of difference might have significantly contributed to Sunyoung’s control and development in Narrative texts. In addition, she also demonstrates a range of grammatically complex verb patterns to convey subtle meanings effectively. If we think of the experiential characteristics of Narrative writing in terms of lexical range and grammatical complexity, control of verbal groups appears to be one of the key factors in successful writing in this genre. 3.5.3. Nominal Groups The development of nominal groups is also closely related to the young children’s control of written language mode. In Narrative texts, nominal groups are mostly found in the positions of participants which depict characters or key events. Therefore, the successful usage of nominal groups is directly linked to the essential Transitivity system along with the role of the ‘process’. In specific terms of Nominal groups, overall, Jinha and Sunyoung’s Narrative texts demonstrate a range of nominal groups with both elements of pre-modifiers and post-modifiers. Even in their early texts, both children employ an embedded clause as Qualifier in their nominal group structure, and to provide additional defining or circumstantial information about the Thing (Head noun), both children use the pattern of ‘V- ing’ as post-modifier frequently (e.g. I saw the man hiding behind a rock). Also, the range of Epithet (adjectives) has also semantically expanded over time. Some further patterns of modification in nominal groups can be found in Sunyoung’s Narrative texts. The nominal groups using infinitive verb (e.g. Sarah was the first person to put her hand up.) or past participle as pre- or post modifier (e.g. a puzzled look, a twisted, mean smile) are much more frequently found in Sunyoung’s texts. In addition, in many cases, there are nominal groups which use prepositional phrases as post –modifier as well as ‘-of prepositional phrase’ (e.g. a man with a long beard, the wrapper of the bright red package). Since Sunyoung constructs morel lengthy Narratives in her later periods than Jinha, and also the Sunyoung’s total production of Narrative texts outnumbers Jinha’s, more varied application of nominal groups might have been possible for Sunyoung’s Narrative texts. However, it appears quite obvious that Sunyoung has developed her lexico-grammar related to the nominal groups at a remarkable rate and at a younger age than Jinha. 3.5.4. Theme Choices For effective text development and contextual coherence, the Theme choice of written texts is generally accepted as an important factor in constructing textual meanings. However, in Narrative texts, thematic choices seem to perform more than the normal function by making special effects to create the sense of emergency, a turning point or a feeling of settling down in each stage of Orientation, Complication and Resolution. In Jinha’s and Sunyoung’s Narrative texts, both of them demonstrate growth in control of the range of thematic choices (topical, interpersonal and textual) throughout the research period. This kind of controlling thematic choices can be claimed as the evidence of written language development in connection with contextual coherence and emphasis. The tendency of extending the range of thematic choices is very similar in both children. The unmarked topical Theme (e.g. I, Chris) and textual Themes (mainly structural conjunctions – and, but, because, when) are selected in most cases in earlier texts, and temporal circumstantial clauses or adverbial phrases are frequently added as thematic choices in both subjects’ later Narratives. When they start to write the Narrative texts which include dialogic exchanges, interpersonal Themes (finite verbs, connectives, vocatives) emerge but there are relatively a few modal adjuncts as Theme choices. In later periods, both children include some cases of ‘thematic equatives’ (e.g. All Chris wanted was …) which have the focal emphasis effect (exclusiveness). This appears to be further evidence of their development of the written language mode. Along with the similarity in their development patterns in Theme choices, there are also some special points in Sunyoung’s Narrative texts. In her later Narratives, the choice of unmarked subject Themes begins to include more abstract nouns such as ‘a brainwave’, ‘a gust of wind’, ‘darkness’ and ‘anger’, and they actually contribute to constructing symbolic meanings in connection with Evaluative elements. Also the impersonal pronouns such as ‘it’ and ‘that’ realize many different semantic meanings. Also, in many cases, Sunyoung uses dependent non-finite clauses in her later Narrative texts rather than structural conjunctions realizing textual Themes (e.g. She was pulling a sour face, trying hard not to laugh).

Based on the researcher’s longitudinal case study of two ESL Korean children’s biliteracy development, this book focuses on the text analysis of English academic genres, including narrative, report, review, explanation, argument and procedure—all powerful genres for ESL children’s further text development. The text analysis was conducted as a systematic and comprehensive application of Systemic Functional Grammar (SFG) and the genre-based approach—both widely accepted frameworks of discourse and text analysis. As a result, this book is expected to be a useful additional reference when providing detailed guidance for SFG-based text analysis of ESL primary school students’ writing samples. The subject children’s balanced development of narrative and factual texts demonstrates a possible solution for controlling the process of appropriate schematic structures and linguistic choices, including the range of process types, nominal groups, interpersonal modality choices, thematic choices, and cohesion devices. Recognizing that ESL children are the minority in an English-speaking community, this book hopes to show that the key to prevent ESL children from lagging behind and help them successfully learn at the same time sequence of mainstream native English speakers is engagement with the full range of powerful literacy texts.

Bo-Ai Ko graduated from Sogang University, Korea with a bachelor’s degree in English Language and Literature, and continued her master’s degree and PhD in TESOL at the University of Canberra, Australia. As a researcher and mother of two ESL Korean children, she conducted a six-year longitudinal case study that incorporates her experience with and educational philosophy behind bilingualism and biliteracy development. She has been teaching as a professor of the Department of English Language Studies, Seoul Digital University. Her research interests include bilingualism and biliteracy, teacher training for English literacy education (Genre-based approach, extensive reading program), ESP, critical pedagogy and discourse analysis of written language.