A Collection of Writings by Asian Artists Working With Communities 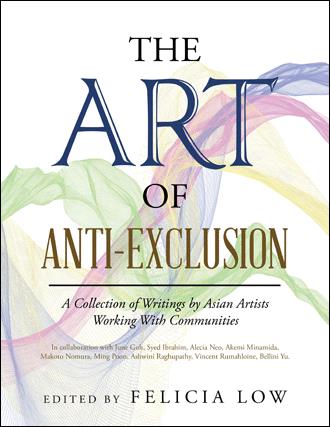 The Art of Anti-Exclusion: A collection of writings by Asian artists working with communities, brings together the writings of 8 artists and one researcher who document various arts forms carried out with communities in Asia. Written in collaboration with June Goh, Syed Ibrahim, Alecia Neo, Akemi Minamida, Makoto Nomura, Ming Poon, Ashwini Raghupathy, Vincent Rumahloine and Bellini Yu, these projects span the fields of drama, dance, music and art. They also span across various types of communities who reside under specific contexts in their particular countries. These include transgendered persons in India, those with special needs in Hong Kong, rural communities in Japan, squatter communities in Indonesia, HIV positive persons and the elderly in Singapore.

Dr. Felicia Low, a graduate of Goldsmith’s College has been a practicing visual artist since 1999. Her projects have mostly been site-specific, performative and community-specific as she works collaboratively with different sectors of society. A Lee Kong Chien scholar of the National University of Singapore, Felicia obtained a PhD in Cultural Studies in Asia in 2015. Her research focused on the politics of participatory visual art practices with subaltern communities in Singapore. Felicia is also the founding director of a not-for-profit organization, Community Cultural Development (Singapore), which aims to provide a critical discursive platform for artistic practices that engage with communities in the region. She was the recipient of the Outstanding Youth In Education Award 2005 and was selected for the President’s Young Talent Show 2009 organised by the Singapore Art Museum. Felicia is also an associate lecturer with the Singapore University of Social Sciences (BA in Art Education & Psychology/Arts Management) and teaches Anthropology at The School Of The Arts, Singapore. Website: www.ccd.sg