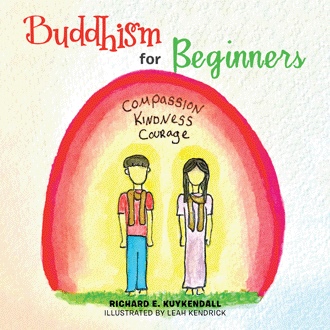 There once was a Buddhist brother and sister named, Chen and Bre' who were devoted to their faith and they lived in the city of New Delhi, Iindia. As they grew o lder in their understanding of their faith, there came a time when they were 14 and 13 years old that they were invited to attend a three day retreat with His Holiness, the Dalai Lama! Of course they were not the only young people to come, for many were also coming to be taught by His Holiness.

This book is a fictional story about two children from New Delhi who go to a retreat with His Holiness the Dalai Lama in Dharamshala to learn the story of the Buddha as well as his teachings. At the end of their three-day retreat, they take “the three refuges” as well as the bodhisattva vow.

Richard E. Kuykendall holds a Bachelor’s degree in Religious Studies, a Master’s degree in Philosophy and World Relgions and a Doctoral degree in Spirituality. He founded “Spiritiwnd: A Study Group for Spiritual Adventurers” in 1990, where he leads those who attend into “the exotic realms of the Spirit.” Kuykendall is also the author of several other books, three of which are Prophetess of the Earth, The Dream Life of Jesus and The Forgotten Witches of Ancient Israel. Kuykendall has been a long-time student of Buddhism and has studied with His Holiness the Dalai Lama. This is his first children’s book.