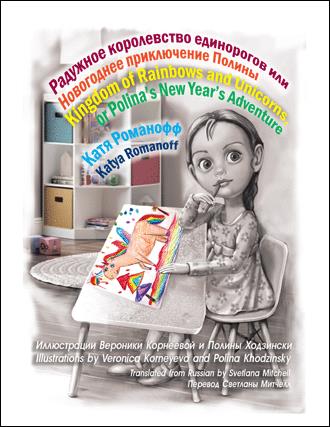 In an ordinary city full of cars, on the ninth floor of a high-rise building, lived a little girl named Polina. She was the cutest little girl, as pretty as a princess, but she was very shy. Polina thought of herself as a big girl because she was already a kindergartener, and eager to start real school. It was winter. Polina did not like winter very much. In winter time, in the city full of cars, the white snow turned black very quickly and looked like white nougat candy dropped into dirt, spread on the side of the road. Lots and lots of dirty pieces of nougat candy. And it was very cold and dark nearly all the time: in the morning, on her way to kindergarten, and in the evening, on her way back home. Burr! Polina’s mom often took her and her little sister to the park to build snowmen and have snowball fights. Her dad would take them sledding down a snow-covered hill, and yet, Polina still didn’t like winter. She liked spring and summer much more, when it was warm, when birds were singing and flowers blooming, and when the sun was gentle and warm. Still, even in winter, there was one thing that was joyful and fun. Can you guess what that is? New Year’s Eve, of course! As long as she could remember, Polina always wrote a letter to Santa Claus with a list of presents that she wanted for the New Year’s. She tried her hardest to write in her best handwriting and without any mistakes, and when she didn’t know how to spell a word, she drew a picture. Then she carefully licked the edges of the envelope to seal her letter tight, and proudly dropped it into the mailbox, waiting impatiently for New Year’s Eve, or the morning after—to be exact, when she would find a mountain of presents in beautiful, colorful wrapping under the tree. It was always a wonderful miracle! Especially when she received exactly what she had asked for from Santa. It was magical!

The New Year’s Eve is truly a magical time. It is when the old year departs, and a new year arrives, and Father Frost, also known as Santa Claus, pays a visit to children who have been good, bringing wonderful gifts. It is at this magical moment that little Polina finds herself in the Kingdom of Rainbows and Unicorns. There she meets her “twin” – Princess Alina and her little helpers, unikittens, and a creature of her dreams, a unicorn named Prince Rainbow. Together with Alina and Prince Rainbow, Polina explores the fairy-take kingdom and encounters alicorns – the flying unicorns and a rainbow “bubblefall.” Polina’s amazing adventure would be completely fantastic, if the next morning, she wouldn’t wake up to realize that all that has happened to her was only a beautiful dream.

Katya Romanoff writes poetry in Russian, and is a member of the Russian Union of Writers and the International Union of Writers. Her poems are published on the website www.stihi.ru - the largest Russian literary on-line portal, as well as a variety of literary almanacs in Russia. Katya also writes poetry for children and has published three children's books, "Meeting of the Seasons" (2012), "A Dozen Deepest Wishes" (2013), and "Meowvelous Show" (2019). Katya teaches English as a Second Language in public schools in New Haven, CT, grades K-8. Her biggest joys in life are raising her two young daughters, ballroom dancing, and gardening.