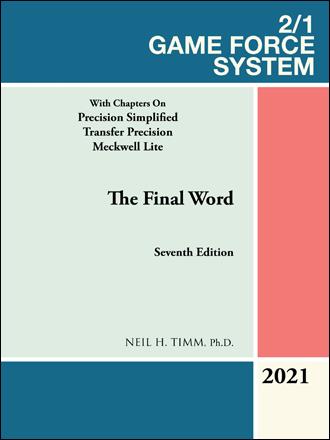 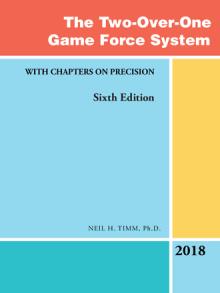 The 2/1 Game Force System is an improvement over the Standard American System that has been in effect and played by bridge players for many years. The advantage of the 2/1 System is that it allows the partnership to know that game is possible with only an initial single bid. This book is about bridge that incorporates conventions that allow partnership’s to reach game or slam. In this regard, I have incorporated modern methods for hand evaluation developed by Marty Bergen called the ADJUST-3 Method and Zar points, new bidding conventions like SARS (Shape Asking Relays after Stayman) and Quest transfers, and an overview of “Bridge Rules and Laws” that I hope will improve your approach to the bidding structure you may use today. Also included is the bidding structure are Bergen, Reverse Bergen, and Combined Bergen major suit raises, inverted minor suit raises with crisscross and flip-flop, cue bidding, modified scroll bids, and many more methods not used in Standard American or Precision. The bidding conventions in the previous editions have been enhanced, corrected, expanded upon, and reorganized with new ones added. Given the release of the new ACBL convention charts, the chapter with the modifications to Fantunes, in my prior edition, is no longer needed. Fantunes may now be played using the Open Convention Chart. The Mid-chart no longer exits. Hence, I have deleted the chapter and replaced it with a new chapter on Bridge Tips, and Agreements. New conventions include a Modern Splinter Bidding Convention, the Zirconia Convention, Unusual 2-level bids, Jump Transfer bids, a new Two-Way Check-back Convention, 1430 Modified Jacoby 2NT*, additional Bridge Rules with more examples, Four-Way Transfers with the range ask bid and more are included in this edition. Also included is an update of the Minorwood and the Roman Keycard Blackwood Conventions, Two-Way New Minor Forcing with modified Wolff Signoff bids and new bidding sequences using Mini/Weak Notrump. The topic of Offense to Defense Ratio (ODR) is included in this revision as well as expanded bidding sequences when opening and responding to the bid of 2♣ playing the 2/1 Game Force System and many new Bridge Rules have been added to Chapter 10. A copy of this book is on the web site www.bridgewebs.com/ocala. A hard copy is available from the publisher or from Amazon.com – search on neil timm.

Neil H, Timm is professor emeritus from the University of Pittsburgh where he taught statistics for thirty-five years. He has written several textbooks on Multivariate Analysis and Linear Models. Dr Timm is currently a Sapphire Life Master and has developed new bidding systems called Modified Scroll Bids, Montreal Relay bids, A Modern Splinter Convention and a new 1430 RKCB system which replaces the Jacoby 2NT bid to facilitate slam bidding.